The Roman Mysteries: The Fugitive from Corinth (TV adaptation) 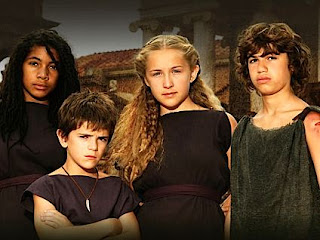 I was very fond of this story when I read the book, partly because it's set around Corinth, Delphi, Athens and the surrounding area, the places that first made me fall in love with the ancient world on a school holiday years ago. Unfortunately, presumably for reasons of budget and practicality, this adaptation takes place between Ostia and the shrine to Diana at Nemi (near Aricia) instead, so we don't get to see Greece.

Flavia claims that people believed that if you washed at Diana's shrine, you would be 'cleansed of your sins.' This isn't quite right - 'sin' is a Christian concept. There are rough equivalents in ancient religion, mainly involving crimes against the gods, but nothing with quite the same meaning. The shrine at Nemi had many functions, including the ritual that formed the basis of J. G. Frazer's famous doorstopper The Golden Bough, and votive offerings have been found there. However, it is a very suitable substitution for the book's Athens. In the book, Aristo was forced to run to Athens like Orestes running from the Furies; here, he chases Dion to the shrine of Diana at Nemi, supposedly founded by Orestes and a place associated with the cleansing of blood guilt, among other things.

Although some fairly substantial alterations have been made from the book, this is a good adaptation. Aristo is a lot blonder than I imagined him, and looks disconcertingly similar to Caudex, whom I love; loved him in the books, love him even more in his expanded role in the TV series! His fierce loyalty to his master is lovely - although he's a slave, his love for and loyalty to Flavia and her family is both plausible (Tiro showed a great deal of love and loyalty to Cicero) and satisfying to watch. The cross-dressing character from the book, on the other hand, has been omitted, probably because those stories are so difficult (though not impossible) to do well onscreen, and to keep the running time down.

I enjoyed Jonathan and Dr Mordecai's story, which was written for the television and which takes up Mordecai's need for a new 'nurse' to replace Miriam from the books and combines it with Jonathan doing some detecting on his own while Flavia pursues Aristo across the countryside. Everyone gets plenty to do here, with Lupus and Jonathan saving the day, while Flavia and Nubia have a beautiful, touching conversation while trapped and convinced they're about to die, which is also terribly sad, as Nubia is convinced they are going to different places. 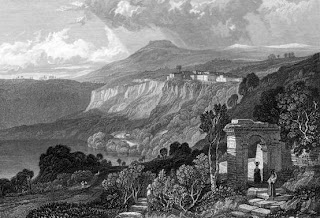 This is probably one of my favourite of the television adaptations, as it has both well executed action sequences (particularly the runaway cart) and lovely character moments. Although the budget didn't stretch to some of the most spectucular ancient sites in Greece, it is very nicely shot and I totally want a Caudex of my own please (not as a slave, obviously - as a butler, maybe. Like Alfred in Batman, but with gladiatorial training).