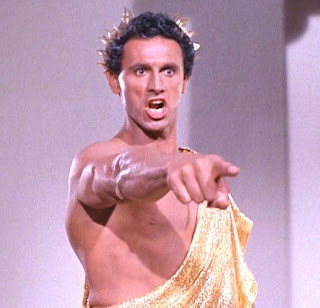 Actual, living, breathing, flesh and blood - or whatever it is gods are made of - Greek gods are really hard to do well. They are very, very easy to do badly.

Of course, all gods are hard to do well, but the Greek ones are, it seems, especially hard. Egyptian gods can look really scary, especially if they're running around with animal heads, all creepy and menacing, so for every unfortunate looking Scorpion King or unintentionally hilarious Hathor, there's a really cool monster or a Mr Ibis. Norse gods (comic book version or 'real' version) can be cheesy in the extreme, but they usually have a certain rugged charm going, plus it's hard to argue with someone wielding a giant hammer. Far Eastern gods don't make many appearances in Western popular culture, but when they do wander in they usually look pretty cool. Then there's made-up gods, who are best of all, as they can be manipulated to be whatever the writer/director wants.

The Greek gods, on the other hand, are lumbered with the most unfortunate set of recurring characteristics. They dress in old sheets, draped bizarrely unflatteringly across bare shoulders, they tend to be portrayed as aloof and not very emotional despite all mythological evidence to the contrary, and they are usually forced to hover, transparently, in cloud formations, watching their favourites do battle down below. Zeus tends to come off the worst, as the actor playing him usually feels bound to suggest awesome power in a vague and indefinable way which essentially translates to bland, robotic line readings directed towards a camera smeared in vaseline.

Here, then, I thought I'd celebrate the few, those happy few, who somehow manage to transcend cheesy blandness and make Greek gods into real characters that you might actually want to spend some time with.

Apollo (Michael Forest) in Star Trek, 'Who Mourns for Adonais?'
Cheesy costume? Check!
Ancient character? This Apollo definitely displays a few traits in common with the ancient Greek Apollo - he makes a point of referring to his lyre and to music in general and, perhaps more significantly, sexually assaults the Guest Female Crewmember of the Week, which is definitely typical of Apollo (and Zeus, and Hades, and Ares, and Pan...) His main characteristics, though, come not from Greek mythology, but from Star Trek's obsession with god-like aliens who toy with the crew and dress the female members of the landing party in ridiculous costumes before being defeated by Kirk's stalwart Americanness.
Why watch him? Partly because he's a surprisingly rounded character as godlike-space-aliens go, who almost elicits a little sympathy as he literally fades away at the end because no one needs him any more. But mostly because he catches the Enterprise with a giant green hand floating in space, and there's no circumstance under which that isn't cool. 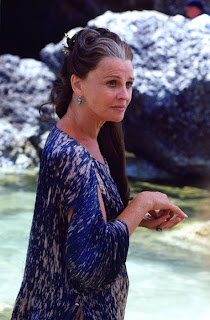 Cheesy costume? Thankfully not. Thetis' costume is relatively normal by Troy's standards, and is in that gorgeous blue they used for so many of the costumes in the film.
Ancient character? Pretty much. Most of her scenes from the Iliad have been cut along with all the other gods, but her most important role, that of telling her son that he can either die young and famous or old and obscure, remains.
Why watch her? I love Thetis' appearance in Troy. All the other gods have been cut and wisely so, because this is a war story and I think, for modern audiences and certainly for me, that works better if the gods are relegated to metaphors or removed all together. But Thetis is Achilles' mother, and their scenes together are both powerful and important to the story. Rather than depict her as straightforwardly human, the film implies that there is something other-wordly about her knowledge, and the fact she is a sea goddess is indicated by her spending her entire appearance paddling. However, she does nothing overtly supernatural and could just as easily be read as Achilles' human mother, with a bit of a pessimistic streak. This half and half solution didn't work for everybody, but I loved it. Plus, any excuse to have Julie Christie in your film is a good thing.

Poseidon (Kevin McKidd) in Percy Jackson and the Lightening Thief
Cheesy costume? Not at first, as he wanders around looking grumpy in civvies. Even when he gets the god-gear out, it's actually not that bad - the costume designers on Percy Jackson leaned more towards pseudo-military outfits than bedsheets, and it works.
Ancient character? Well, he's bad-tempered enough to be Poseidon, and he does not take insults to his children lightly. He's got that slightly sulky look of the brother constantly stuck between the other two, which is how modern depictions of Poseidon tend to go, because ramping up the tension between Zeus and Hades means Poseidon is left as something of a third wheel - in ancient myth, Poseidon and Hades are probably a bit more evenly balanced, but it's not far off.
Why watch him? Because no one can do grumpy and belligerent like Keven McKidd, aka Lucius Vorenus, aka Boring Soldier (see also: The Last Legion). His scene with Percy at the end has all the hideous awkwardness of Boring's unsuccessful attempts to connect with his children in season 2 of Rome, except with extra added superpowers.

Hades (James Woods) in Hercules
Cheesy costume? Fairly cheesy, but the skull ornamentation and fiery hair lift it.
Ancient character? No. Hades gets mutated into a pantomime villain in most modern productions for two main reasons, 1: Because the underworld tends to get anachronistically associated with Christian conceptions of hell, and Hades with Satan and 2: Because the films need a villain and the god of the underworld is a pretty good fit. I like the idea that he resents getting stuck with the underworld though - I would!
Why watch him? Because he's hilarious. And creepy. And so much more fun to watch than most of the other gods, you're almost rooting for him to win.

Zeus in Fantasia
Cheesy costume? Oh yes.
Ancient character? Yes. Unlike most film and TV Zeuses, this Zeus does not spend all his time moping about Olympus looking slightly constipated. Oh no, this Zeus has fun. He throws thunderbolts around like toys, he persecutes a figure who is either Dionysus or, perhaps more likely, Silenus, for no particular reason, and he eventually gets bored and has a nap. This seems to me to be much more like the mythological Zeus, who throws his weight around, makes everyone else's lives more difficult, and does whatever he wants whenever he wants, than the more staid versions who seem weighed down by the effort of ruling the Earth. 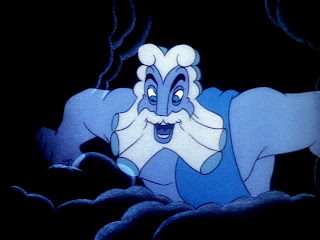 Why watch him? He's got such fantastic joie de vivre, you can't help but feel entertained and brightened up. Just look at that face.