The Time Travel Diaries: Adventure in Athens, by Caroline Lawrence 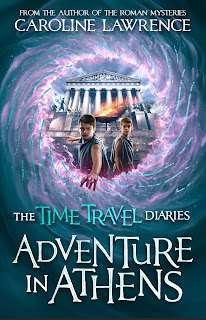 As I mentioned in my review of the first book in this series, last year's The Time Travel Diaries, part of the joy of time travel stories is that the protagonist can describe all the things they experience in modern terms, making the story that much more vivid. (There's also a moment where the protagonists stop and realise how well they can hear nature and how many birds they can hear - this was written well before the lockdown, but has extra resonance now!).

This extends to cultural attitudes and historical realities as well. In a time travel story, there's no need to have remarkably forward-thinking protagonists who subtly imply they care about their slaves, respect women, and so on. Because this is a time travel story, Alex can simply express his disgust for slavery, and new character Crina her disapproval of ancient sexism. This allows the reader to enjoy the story while still understanding the obvious problems in ancient society.

There is one aspect of ancient Athens that has been slightly sanitized because this is a children's book - the description of the herms that were placed all over the city is missing a bit. Herms are a head of Hermes on top of a large stone block, with a phallus sticking out at the appropriate height. The plot of the story builds up to the night Alcibiades and his friends vandalised the herms before they were supposed to leave for the (disastrous) Sicilian Expedition. Thucydides (6.27) does say that it was the faces of the herms that were vandalised (somehow I had always assumed it was a different part...), so the story is all pretty much accurate, apart from the initial description of the herms, at which point the phallus part is simply left out! Presumably the publishers were worried about putting that detail in a children's book.

I did love the description of the herm that looked like Socrates, which sounded just like the heads of philosophers that sit on Broad Street in Oxford. All of the description here really brings the ancient world to scary, smelly life - one of the things this series has in common with the Outlander series (which I've just started reading) is that it provides lots of descriptions of smells, which make the world of the past leap off the page. Our time-travelling heroes decide to break the rule about not eating on this adventure as well, which means we get some lovely descriptions of Greek food (both ancient and modern), which I especially enjoyed since I love Greek food!

This being a middle grade novel, the descriptions need to refer to things teenagers know and enjoy, which Lawrence does very well. A former teacher, she obviously keeps in touch with current fashions, as there are references to TikTok (which I, being old and boring, only recently heard of!), Love Island, and so on. And there are lots of references to a videogame called Ancient Greek Assassins, which is obviously standing in for Assassin's Creed: Odyssey. One of the main themes of the book is that, while the game is great and joyful use is made of it, actually experiencing living and especially fighting in ancient Greece would not be quite so much fun!

What I loved the most about this, though, was the way the story introduces the basics of Socrates' philosophy and the Socratic method, as well as some key events from Athenian history. If you don't know anything about ancient Greece, everything you need to know is explained clearly. If you do know some ancient history or philosophy, there are loads of lovely Easter eggs here for scholars. There are references to 'Agathon's party', i.e. the party from Plato's Symposium, and a minor character is called 'Euphiletos' - the same man who later killed his wife's lover and defended himself with the speech Lysias 1, perhaps?! There's also a brief moment where the dual form in the Greek language is used for a minor plot point, which I loved!

Perhaps more importantly, though, Socrates' actual philosophy - or the version of it recorded by Plato, anyway - is put across is an engaging and comprehensible way (something I often fail to do in my classes!). I suspect there are a lot of references I missed because I'm not overly familiar with Plato's works - The Symposium is the one I know best and I caught a couple of references to that. Agathon's description of how Socrates makes him want to be better, I'm pretty sure came from that dialogue. There are also sausage sellers straight out of Aristophanes' plays and, I'm sure, loads of other little things I missed all together.

It's a shame Alex and Dinu are unlikely to be time travelling again (Narnia-style, they're now too old), as they're likeable heroes. I also enjoyed the fact that they are practising Christians, which is unusual in mainstream literature outside of specifically Christian literature these days. Their 'Socrates Club' that they form at the end is full of potential new time travellers, though, so I'm sure there will be more adventures to follow, even if the time travellers are different people!

All reviews of Caroline Lawrence's books