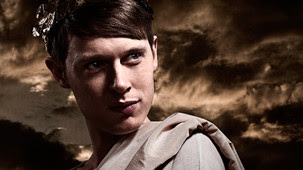 Having spent much of the weekend in Birmingham Airport, I'm back early and looking at the pile of work left by having a week off with some sense of trepidation.

Although this episode is largely about Caligula, it starts still a little way off from his reign, with Macro running Rome and Herod Agrippa getting into trouble with Tiberius. We hear the end of old Thrasyllus, which is nice, since he's been so important to Tiberius, and Tiberius starts having occasional attacks of remorse for all the murders, which are quite entertaining. We also hear more from Antonia in the opening sections involving Herod than we have for ages, if at all (even her role in the downfall of Sejanus was related through Claudius and his slave). This, presumably, is to remind us of her character and (bad) relationship with Claudius before her suicide during Caligula's reign.

Tiberius reaches the end of the road, and, it is implied, Thrasyllus' warning prophecy actually played a part in his death, since he caught a chill travelling in the east wind in an attempt to avert it. It is during this illness that Caligula and Macro get fed up of waiting for Tiberius to die and smother him themselves, rather gleefully (when Tiberius wakes up and says 'I'm feeling better!' all I can see is the old man from Monty Python and the Search for the Holy Grail, being thrown on the heap of corpses while yelling 'I'm not dead! I feel happy! I feeeel happyyy!').

Caligula, of course, starts out bad and gets worse. We already know he drinks and has threesomes involving his sisters and is spending all the public money before his serious illness, and, as he reveals to Claudius, he helped to kill Germanicus, but he only declares himself a god after his 'brain fever'. Drusilla puts it perfectly succinctly; 'He's always been mad, of course, but now...' Claudius' reaction to the truth of Germanicus' death is very well played - not much shocks him at this point, but this does and you can hear the fresh grief in his voice. Thrasyllus' prophecy concerning the great god to come, clearly written by Graves to refer to Christ, is given more detail here, as Caligula matches it to himself (he'd be quite convincing if it weren't for the blood-drinking part).

Drusilla is well played, sad and frightened and hoping that her new status as a goddess will protect her, but, as per Graves' novel, the exact circumstances of her sudden death are mysterious, though Caligula implies that a god loving too much can be fatal. The decision not to go for anything as mad and over the top as the TV series is certainly a wise one, though it seems a shame to dismiss her so quickly without so much as a suggestion about what happened to her, other than that Caligula has somehow, and for some reason, killed her.

Antonia continues to sound overwhelmingly cross and she almost seems to allow Caligula to goad her into suicide, resenting Claudius for his survival all the while and snapping a sharp 'goodbye' at him without so much as a kiss. Her bad temper obviously didn't win her many friends, as only Herod dares to come to her funeral, and he tells us what happened to Macro, which is nice - it's not that we couldn't guess what happened to him, but it's nice to hear these things rather than have people simply disappear to Mandyville.

Claudius gives a decent enough speech to a rabble about informers, which goes over well, and which involves him saying 'Friends!' repeatedly (thus making me expect the next lines to be 'Romans!' 'Psst! and Countrymen!' 'I know!'). Meanwhile, Caligula's rather innovative ways of making money include auctioning the clothes, literally, from Claudius' back, which if shown on television would be utterly humiliating, though on radio, without being able to see his nightmare, it's rather funny. This is followed by a very sweet scene in which Calpurnia reveals that she has enough genuine affection for Claudius to have saved enough money to keep both of them when Caligula bankrupts him, while Caligula's affection for Caesonia baffles him but is also equally genuine.

Even on radio, it's not a Roman drama without an orgy, and really, you can't actually tell the story of Caligula's palace brothel without one. Again, where a television adaptation is full of sensual people drugged up and enjoying themselves and tragically unhappy people trying to get away, the radio has to rely on sound effects, which are more comic than anything else. It works well enough though, and includes scenes you could not show on BBC television - although every adaptation describes Caligula sleeping with his sisters, here we have a full incestual sex scene (Rome came close, but if I remember right, we didn't actually see them in the act - I'll be getting to that episode quite soon I think).

We hear Claudius thrown in the river, where again the radio benefits from not needing stuntmen or an effects budget. We also get to hear Caligula's changing views on literature which include a very low opinion of Virgil; 'Tries to be Homer. Can't do it.' I like Virgil a lot, but I can't help feeling there's a teeny bit of justification in that... The pivotal scene where Caligula asks Claudius if he thinks he's mad is well played, though since it's separated a little from the river incident, and Claudius is so insistent that he is not mad, you almost think Claudius is a little bit of a coward for not taking the opportunity. It's there that the episode ends, so Caligula's tormenting of Cassius Chaerea and sticky end will have to wait until next week.

This was another excellent episode, effectively telling Caligula's descent into complete madness while keeping us up to date with Claudius himself. There were a couple of unintentionally funny moments, but this was really the only way to do this story on radio. There's a part of me that would love to see a reinterpretation of Caligula, which assumed that Suetonius and all the others were working from ridiculously hyped gossip and he really wasn't that bad or that depraved, but I think that is probably a bit of a stretch, and you'd leave your audience thorougly disappointed. It certainly woulndn't be Graves' Caligula; Graves' Caligula is very well represented here.
I Claudius Radio Roman history