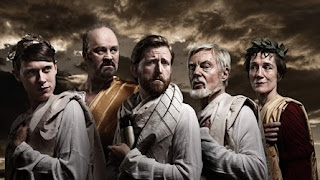 I did an interview this week for the excellent art history blog, Three Pipe Problem; if you'd like to read my thoughts on the Browne report and the Greek dramatists, among other things, pop on over and read it here.

As usual, I haven't recapped all of the plot here because I've already done substantial recaps of the TV series adapted from the same book.

At the opening of this episode, things finally blow up between Livia and Tiberius over the death of Germanicus and the trial of Piso and Plancina. The trial is whizzed through very quickly, within ten minutes, so that the episode can focus more on Tiberius' increasing insecurity and his reliance on Sejanus. Livia is finally shoved aside by Tiberius, but continues to make her presence felt as Claudius and Agrippina discuss the dubiously close relationship she has formed with Caligula.

Last week, Claudius expressed no sorrow at all over the death of his son in his narrative, but this week, Flashback!Claudius weeps over his son, and all the others, to his courtesan, Calpurnia. Perhaps the narrating Claudius wants to deny any affection for his rather unpleasant offspring, while Flashback!Claudius cannot deny his sorrow to his lover, and he suggests that he is feeling the deaths of a lot of people at once, not just his son. As in the first episode, we hear much more of Claudius' personal life in this series than we ever saw on the television version, continuing the series' focus on the figure of Claudius himself.

Sam Dale's Sejanus is a fascinating choice of voice - whereas Patrick Stewart went for the same sort of confident, commanding voice he later used for Captain Picard, Dale's Sejanus has an all together softer, sneakier voice. He pitches his voice fairly high and speaks in an almost whispering tone, surprising Claudius by apparently sidling up to him in a busy street.

Claudius' wife Urgulanilla's voice is even more interesting, almost masculine, presumably partly to emphasise her size and partly to make her sound scarier, as she quite terrifies poor Claudius when he makes the mistake of coming to sleep in their marital bed. She also reads a Greek romance novel aloud to herself in bed (very slowly and very badly, as described by Graves in the novel), which is very interesting. Many scholars argue that everyone in the ancient world read books aloud at all times, whether in company, where one person would read aloud to everyone else, or to themselves. I haven't studied this question enough to have an informed opinion, though instinctively, I imagine that books were often read aloud to a group, but read silently when reading to oneself. Of course, Urgulanilla might just be doing it to annoy Claudius.

The episode includes the full details of the final end of Claudius' and Urgulanilla's marriage, which Graves presents as wonderfully complicated. Sejanus wants Claudius to marry his sister, so he sends Urgulanilla a male slave who is the spitting image of her female lover so that she gets herself pregnant and Claudius has to divorce her - and, meanwhile, Urgulanilla herself ends up murdering her sister-in-law and pinning the blame on her brother. It's nice to hear all these details of Claudius' own life, and this particular story is, of course, thoroughly connected to the main plot, so it makes much more sense to use this story to illustrate Sejanus' nastiness at work than something relating to someone else - though it is perhaps a shame than Castor is killed off very quickly, and Livilla's speaking role reduced a bit from what one might expect.

Hearing Livia compose her invitation to Claudius to dinner is very funny - she adds the word 'dear' on the second draft, having never been so affectionate before. The difference between Claudius' respectful 'Grandmama' and Caligula's offhand 'Granny' during this scene is well played. Harriet Walter also ages her voice very effectively, and her confession to the multiple murders is cross and abrupt and perhaps even a little embarrassed. She displays no regret over any of them, not even Claudius' son or Augustus - not showing remorse fits her character, but considering Livia and Augustus' fifty-year marriage, I think the scene misses a sense of at least a little regret and sorrow over his death. The dialogue (straight from the book) supports this interpretation, as she explains that she has remembered the forced suicide of her father, which was Augustus' doing, all her life and therefore had no problem murdering Augustus. (The following scene also reminds us that she and her first husband and the young Tiberius also had to go on the run from Augustus at one point). It's logical enough, but I found the television's portrayal of a marriage that was genuinely loving but ended by Livia's ambition for her son more interesting.

There's a lot of very welcome humour in this episode. Livia's final scene with Tiberius is hilarious, as she tells him to make sure he wears a vest in the cold, though there is a touch of tragedy in Tiberius' riding off in a huff without saying goodbye. Livia's subsequent death sends Tiberius over the edge and results in the ruin of Agrippina, and we return to the story of Sejanus and Livilla. We hear Graves' detailed description of how Antonia brought Sejanus down through a conversation between Claudius and a family slave who tells him everything out of loyalty because although Antonia runs the household, Claudius is the man of family and his master. The conversation between Claudius and his slave is rather sweet and also very funny, as Claudius has a complete panic and starts to wail.

We meet grown-up Caligula when Tiberius makes him his heir, and his voice is wonderfully snide and slimy. As Sejanus meets his end, we hear the letter condemning him in full but his death is narrated by Claudius. We then hear Antonia insist on executing Livilla herself, and we hear Livilla's screams while Claudius narrates Antonia's actions over them, which is very effective. We also hear Claudius pleading on Livilla's behalf and Antonia starting to weep as she refuses, on which the episode ends.

This was a particularly successful episode. Claudius' personal story no longer feels like a separate strand from the political machinations going on, as he has become part of the political world, much against his will. Although Livia's death occurs three quarters of the way through the episode, which might risk robbing it of some of its drama, this arrangement works because her death is explicitly linked to the increasing horrors of Tiberius' reign and Sejanus' rise as Tiberius 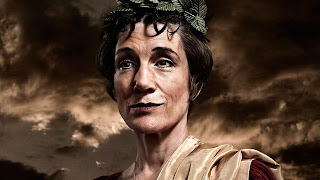 withdraws to Capri. The episode as a whole therefore holds together as a single unit more tightly than the previous episodes have. The episode was followed by an edition of the Radio 4 programme Open Book which discussed the novel, which was also a nice added bonus for anyone listening live!