Doctor Who: The Eaters of Light 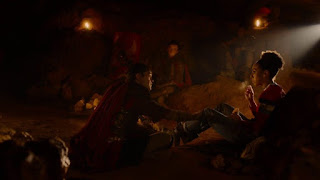 I'm working on a project focusing on Roman Britain in TV and film at the moment, so expect lots of posts about films and TV series set in Roman Britain!

I had meant to blog this episode back when it first aired because I thought it was brilliant, but as usual, didn't get around to it! I enjoyed a lot of Series 10, probably more than I've enjoyed a series of Doctor Who overall for a while, and this and the following episode ('World Enough and Time') were my favourites.

I totally sympathise with the Doctor when Bill insists she knows more about Romans than him, a person who has actually been to parts of the ancient Roman world several times (and apparently not just at the times we know about, though there's no such thing as a 'second class' Vestal Virgin and he hadn't been a woman yet at that point, so we'll have to assume that one's a joke). I have the same problem when students think they know more than me! Though if it's about the ancient military, which is not my area and which a lot of them know quite a lot about, they sometimes do.

The reason Bill has dragged the Doctor back to ancient Rome again is because she's really into the story of the Ninth Legion, who supposedly disappeared into the mists of Scotland, presumably slaughtered by Caledonians, during the second century AD (except they were probably just transferred to Europe and switched with the Sixth Legion). I've written about this before, because it's been the subject of several films, as well as Rosemary Sutcliff's novel The Eagle of the Ninth and its film and TV adaptations.

What I love the most about this episode, aside from just generally being really good, is that it offers a genuine glimpse into ancient Roman culture (what we know of it). It's not perfect (what is?!) and it's had to be censored a bit for a family audience, but the overall impression is more or less on the money, particularly when it comes to sexuality and ethnicity - both of which are significant issues for the characters given that Bill is both black and gay.

On sexuality, Bill is clearly nervous about explaining that she doesn't swing that way to the Roman Lucius, expecting judgment and/or confusion, and is pleasantly surprised to find the Romans completely unbothered and that one of them is gay. Another describes himself as 'ordinary' because he likes both men and women, and thinks Bill is restricted for liking only one gender. All of this is a pretty accurate brief representation of broad ancient attitudes towards sexuality. Perhaps implying that liking both describes the majority is a bit of an exaggeration for Rome (less so for ancient Greece) but we do have evidence for people discussing sexual attraction or admiration of beauty in both men and women (Apuleius in his defence speech, for example, though he mostly seems to prefer women and writes poems to young men, he says, as a literary exercise).

This is not to say the ancients didn't have any sexual prejudices or hang-ups - they did, but these would be unsuitable to explain to a family audience, as they often involve exactly what positions people have sex in and the relative ages and statuses of the participants. In the ancient world, sexual preferences tend to be described more as tastes than as essential aspects of someone's identity - rather than describe themselves as 'gay' or 'straight', Romans would describe themselves as preferring men or women, as these do. So all in all, this really neatly demonstrates that not all periods of history were like the Victorian period, and differing human sexualities have been a part of human life for as long as we've been around.

Race and ethnicity is not brought up overtly in the way that sexuality is. Back in Series 3, Martha expressed concern to the Doctor when they visited Elizabethan England, again projecting 18th, 19th and 20th century racism back onto the past. And again, it's not that racism didn't exist in the past - it certainly did, sadly - but that doesn't mean it's the same as in the modern world or as it was in recent modern history. (For Elizabethan racism, just watch or read Othello!). Bill seems less concerned than Martha, partly because she's already been to the past, and the 19th century at that, and partly because she's studied the Ninth Legion and she does know something about the Romans, so she knows she's unlikely to stand out that much to them.

Shortly after this episode came out, a British cartoon about ancient Roman daily life was attacked on Twitter for including a black character, and Mary Beard eloquently explained that the ancient Roman world and Roman Britain in particular was ethnically diverse, and this was not inaccurate. In addition to the evidence she brought up and the evidence discussed in the article at the link, a tombstone from South Shields commemorates a soldier's freedman called Victor who was from North Africa, a bronze figurine of a Berber cavalryman was found near Hadrian's Wall, and Ivory Bangle Woman, buried near York, was mixed race and was buried with two bangles, one of local jet, the other African ivory. The Romans never conquered below the Sahara and their contacts were mostly Berber, but they traded with and were well aware of the sub-Saharan inhabitants of Africa as well. In this episode, no one remarks on Bill's race and the Roman soldiers are of various ethnicities, none of which is explicitly explained - which is exactly how it would have been, as this would have been normal.

Fictional answers to the apparent mystery of the Ninth Legion often have them mostly killed, with survivors blending into British culture, marrying British women, and only occasionally meeting King Arthur. For Doctor Who, of course the answer involves aliens, but I rather like the idea that they commit themselves to protecting Britain and become part of Scotland and the landscape, which is a twist on the usual story of them blending into British life. Plus it's terribly noble of them.

- The talking crows thing is a bit weird. Very Tolkein-esque.

- There's a nice Outlander vibe to the whole thing as well. Plus yay for Peter Capaldi getting to be in an episode in Scotland, and unlike David Tennant, getting to use his own accent and all.

- It's taken Bill this long to notice that everyone in space speaks English! Good point on the lip-sync though.

This is a good episode, and it doesn't really require any knowledge of Doctor Who to follow it, either. The last five minutes are about the arc plot, but the rest of the story stands alone. This is also quite a good time to get into Doctor Who, as the show has just gained a new showrunner and new Doctor (the character regenerates into a new actor every so often), so the first episode of the new season is likely to re-set the show a bit and re-introduce the Doctor and her world, as well as giving her new co-stars as her Companions, who will be new characters. If you fancy giving modern Doctor Who a go, you like stories about ancient Rome, and you want to try out a fairly recent episode, this would be a good one to go for.

More blog posts on Doctor Who