The Roman Quests: Return to Rome, by Caroline Lawrence 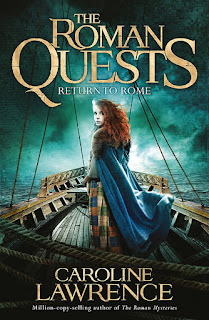 There have been so many things I've thought about writing blog posts about in the past six months - I've been meaning to blog Ready Player One for two years, I need to get back to Britannia, and I know I remember seeing a film I thought I'd blog two months ago but can't remember which one it was... But inevitably what's actually brought me back to it has been the coronavirus crisis keeping me indoors enough to finally finish The Roman Quests series! I'm still working from home so haven't had much time, but I do have a few more free evenings now that all social activities have been cancelled!

This is the very last book in the Roman Mysteries/Roman Quests series (for now, anyway - you never know....!). That makes it the conclusion to a 21-book series - 22 including the short story collection - so it's got a lot of work to do! Primarily it's the fourth and final book in the Roman Quests sequence and you don't have to have read the Roman Mysteries to enjoy it, though it may be richer if you have. This is a really enjoyable conclusion to Juba, Ursula, Fronto and Bouda's story, centred around an exciting climax that puts the reader right in the middle of the plot to assassinate the Emperor Domitian.

The Roman Quests are aimed at slightly older readers than The Roman Mysteries, which is why the climax is slightly more violent here, but they're still entirely suitable for older children - the violence is kept to a minimum and described without gory detail, sexual activity is restricted to kissing and holding hands, and the story is an exciting adventure. I'm by no means expert on children and parents know their own children best anyway, but I'd say any child able to read it and not overly sensitive will probably be fine.

This story takes the children on a quest across Europe, and the journey is beautifully described. I love travelling and I love Europe (I've been to pretty much all the places featured here!) so I really enjoyed this - it was a bit tough to read knowing I can't go anywhere at the minute, but at the same time it was lovely to escape across the countryside in my head from the comfort of my own home! I recognised a lot of the description of the Palatine Hill from visits to Rome so I especially enjoyed reading those sections.

As with all the books in this series, the story is full of thoroughly-researched period detail. I loved the description of a secret door painted to look like a door - I don't know if that's based on a real example or not but it's just the sort of thing Roman designers would love! A real four-layer sardonyx cameo of Minerva (which I think is now in a private collection, but I'm not sure) features heavily in the story as well. There are also the usual little nods and extra treats for those knowledgeable about Roman history and/or who are fans of The Roman Mysteries.

This is about to get a bit spoilery, so if you haven't read the series and don't want to know how it all works out for our heroes, stop reading now!

One of the key drivers of the plot is a prophecy about the exact date and time Domitian will die. Several Roman emperors were seriously concerned about people predicting the time of their death - Augustus, Tiberius, and Nero all took various actions to prevent astrologers from prophesying and especially from prophesying about their own death. One of the reasons for this was exactly what we see here - that if would-be assassins think they know the emperor's time of death, they might decide to do something to bring it about and feel more confident that they will succeed!

OK, now here's where we get into the really spoilery stuff, cause I have to talk about what happens to all the Roman Mysteries/Roman Quests characters!

The plot here focuses on Juba and Bouda and their happy ending, but it also wraps up the story for Fronto and his new wife Bircha, and we revisit Lupus and his wife Clio as well. Of the four leads from the Roman Mysteries, only poor Nubia doesn't appear - she seems to be spending all her time having children! We see Flavia and Lupus again, and Jonathan, having finally reappeared in the previous book, becomes the fourth protagonist of this one as Fronto doesn't appear very much. It was lovely to spend more time with Jonathan and catch up with him again. I also loved catching up with Caudex in his villa in Britannia - the bit where he was mistaken for the door slave was a great in-joke for Roman Mysteries readers, since that was his job in Flavia's home!

The epilogue takes us full circle - in a rather lovely touch, Juba and Bouda end up moving into Flavia's old house in Ostia. Ostia was so central to the early Roman Mysteries, returning there towards the end of this book feels like coming home. It's a bit of a shame poor Flavia's husband gets killed off off-page in the Epilogue, but since he was based on a real (and already dead) historical person, that was probably inevitable.

For the most part, this wraps everything up nicely, but I like to think there's still a little room for more. I thought Ursula was destined to marry Prasutus, but he is left behind in Britain and the point is quite firmly made that from a Roman point of view, she is just the right age to be betrothed to 28-year-old Jonathan (not to mention also Christian). I like to think maybe there might be more stories to tell about Ursula and Jonathan as they travel the Roman world and Jonathan works to try to save 80,000 people. (Flavia is, of course, single again now too and could join them!).

At the moment, Caroline Lawrence is working on a series of time travelling adventures, but maybe at some point her time travellers will come across a Jewish-Christian doctor and his dark-skinned assistant and/or wife - I've got my fingers crossed!