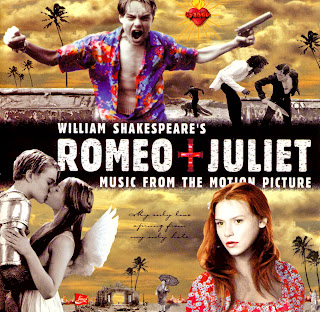 I cover Shakespeare from time to time on the grounds that what he was writing was popular culture, of its day. There's no need to justify the inclusion of this particular adaptation though - despite the Shakespearian dialogue, this film is definitely popular culture. I can still remember countless phone calls as a teenager being addressed as 'Hulieeeeeeeeeeeeeet!' and pausing the video as Leonardo DiCaprio looks at the screen and says 'Well, Juliet, I will lie with thee tonight.' Swoon.

Shakespeare included lots of Classical references in his plays, but they are often edited out when the plays are cut down for film versions (except for Kenneth Branagh's four-hour Hamlet of course). The most substantial literary reference left in this version of Romeo and Juliet (given the + sign in the title to make it extra cool and attract the yoof) is to Queen Mab, who's not Greco-Roman.

There is one Classical reference added for the film, though. Here, the Capulets' party at which Romeo and Juliet meet is a fancy-dress party. Most of the costumes are symbolic of something, mostly something quite obvious - Juliet is an angel, Romeo a knight, Tybalt a devil, Paris (Paul Rudd, young and very cute!) is an astronaut, an all-American hero and perfect son-in-law material. Others are slightly more subtle, though not by much - flamboyant Mercutio is in disco drag, one of Romeo's particularly violent friends is a Viking, and so on. Juliet's parents are dressed as Cleopatra and either Antony or Caesar - of course, since either of those would be a simple Roman costume and there's no dialogue referring to it, it could be either!

Cleopatra for Juliet's mother is interesting. Mrs Capulet is a pretty tough character, later demanding the death penalty for Romeo and cutting Juliet off entirely when she refuses to marry Paris. In her first appearance, during which she puts the costume in all its constituent parts on while talking, she is telling Juliet about Paris and suggesting the idea of the marriage to her. The fact that she is putting on a Cleopatra costume as she does so emphasises the sexual aspect of the marriage, the fact that she is pushing Juliet to grow up and regard men sexually, since Cleopatra is so well known for her sex life and her power over men. The sexuality of Cleopatra also plays well during Romeo's bad trip shortly after, in which he sees her kissing Tybalt, an image the audience is supposed to wonder about - is it real or not? The Cleopatra costume encourages the audience to at least consider the possibility that the event is real, since Cleopatra is so well known for a voracious sex life. The fact that Cleopatra was a queen also plays into Juliet's mother power over Juliet and the importance of her social position, as a woman the Prince must listen to.

During his trip, Romeo also sees Mr Capulet waving his purple tunic around and showing off his underpants, behaviour perhaps associated more with Antony than Caesar (though most of all, I suspect with toga parties - an apparent staple of American college comedies that I don't understand because I've never seen any of those comedies). I also think that he is probably meant to be Antony, because these costumes are a reference to Antony and Cleopatra. There are subtle references to other Shakespeare plays scattered throughout the film, like the phrase 'We are such stuff as dreams are made on' from The Tempest, which is displayed on a billboard. It is quite likely then that these costumes are another nod to a play with a conclusion that bears some similarity to Romeo and Juliet - the costumes foreshadowing the tragic conclusion of the play and of these characters' daughter's life.

When I watch it, though, I find I see Capulet more as Caesar than Antony. Despite his apparent intoxication, during the party, Capulet makes his power and authority very clear to Tybalt when Tybalt threatens to defy him. He is absolute ruler of his small kingdom, and of course his absolute authority over Juliet is an important part of the plot. For a modern Western audience not brought up to understand a society where the power of the father is absolute, this is a helpful visual reminder that no subordinate character can cross Capulet. 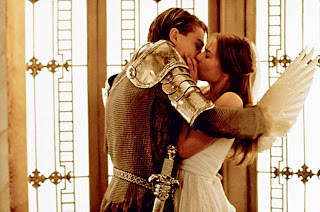 Luhrmann transports Shakespeare's action from Italy to the US for this film, but he gives it a very strong Italian feel throughout, ensuring that the Italian setting is all but kept. The Catholicism of the central characters, so important for the plot, is overtly and opulently displayed and the Capulets in particular have a distinct mafia-like feel to their operation. Dressing their first couple in Roman costumes only adds to this Italian theme. The film is a fantastic adaptation, exciting, vibrant, romantic, violent and with a fabulous soundtrack. If you haven't seen it, make sure to get hold of a copy - it's not just for teenage girls, I promise!
Costumes Films Roman history Shakespeare