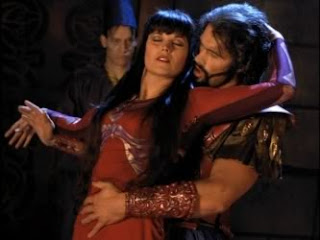 So I finally saw the Xena musical. And it wasn't at all bad.

This episode was determined to demonstrate how very Dramatic it was being from the start (and I saw why it's so popular when we opened on a shot on Gabrielle's naked behind). I'm not clear quite how Gabrielle survived being dragged so far behind Argo and it seemed a bit extreme even given Xena's background, but there was a nice Classical echo there of the famous scene from the Iliad where Achilles drags Hector behind his chariot for ages, so that was nice. Except Hector was already dead at the time. Even Wrathful Achilles was less brutal than Xena.

Once we got into the Land of Illusia, things started to look more like one of Farscape's wackier episodes (what are they all drinking down there in Australasia?). I wasn't too bothered by the fact that the Land of Illusia was never explained - when your show's mythology includes actual gods, I can take a lot on faith (hah! See what I did there?). TV Tropes offers any number of potential explanations for this sort of thing, from A Wizard Did It to just follow Bellisario's Maxim or the MST3K Mantra. In fact, the phrase 'A Wizard Did It' comes from the Lucy Lawless Halloween episode of The Simpsons, so there you go (I love the end of that episode, where the Simpsons children protest that Xena can't fly and the answer is, 'I told you, I'm not Xena. I'm Lucy Lawless, the actress.' Ever since, in my head, Lucy Lawless is a flying superhero. That would be an interesting addition to Spartacus: Vengeance...). Apparently the costumes are based on Tarot cards, which partly explains all the bright colours and medieval theme.

The most interesting moment, Classics-wise, comes at the end of the episode. Right after Xena has been crucified (because the story is all about the importance of love and forgiveness, lest we forget. Also apparently this is the second time this has happened to her), a waterfall appears over a very small underground stream, with a pretty-looking glade on the other side. Xena's late son Solon is wandering aimlessly in the glade, as the dead have a tendency to do in Classical mythology. Gabrielle leaps over but Xena has to sing another song before she can bring herself to do so. When she does, she has a final hug with her son, who then morphs into Gabrielle as they rejoin the real world (completely minus Gabrielle's fairly serious injuries from the horse-dragging incident. A Wizard Did It).

The important unresolved question here is, what was the river? Was it a tributary of the River Styx, representing the border of the underworld? That would mean that Xena was able to say goodbye to the actual shade of her son and tell him she was his mother, something she never did while he was alive. Or was it just a metaphorical stream produced by the Land of Illusia (suggested perhaps by the fact Xena's hugging Gabrielle when they return to reality)? That would mean Xena managed to make herself feel better, but nothing really changed other than that she and Gabrielle forgave each other. I'm not entirely sure which the writers intended; I suspect they were aiming for the second option, though they may have left it deliberately ambiguous. I rather like the idea of the first option - after all, in a series based on a corpus of mythology in which there are practically regular bus services to the underworld, it would seem a shame if Xena was never able to impart this important information to Solon just because of the minor problem that he happened to be dead. 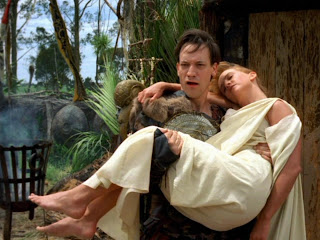 This is a good episode, though once you've seen the Buffy musical, everything else tends to pale by comparison. The choice to dub some of the actors with professional singers was a good one, as everyone sounds great here (including Lucy Lawless and a couple of others who are doing their own singing). I liked Xena's tango with Ares, every TV musical needs a good tango (that's one thing the Buffy version lacks - a shame, as a Buffy/Spike tango would have been really cool). The advantage Xena has over Buffy is that it has such a small core cast, it can take the opportunity to bring back other regular characters and show them in a fresh light, particularly Callisto and Ares. Joxer was at his least annoying ever - singing suits him. Other familiar faces, though, were a bit wasted as they appeared so briefly I didn't even recognise Karl Urban - it was literally blink and you've missed him. The songs are pretty good and quite catchy and in a way it's rather nice that because the entire point of the episode is emotional resolution, the story basically contains nothing but emotional hand-wringing. Other than the need to get out of Illusia, there's really no plot at all. And since without the Xena musical, there might not be any Buffy musical, we are all forever grateful to it!

Disclaimer: The musical genre was not harmed during the production of this motion picture. In fact, the Producers sincerely hope you were A-MUSE-D by this episode.

Edited to add: Now that I've seen the rest of the series, a lot of the symbolism here - especially Xena's crucifixion by Caesar as her start of darkness, coupled with Gabrielle's impregnation by Dahak - makes a lot more sense. At some point when I get the chance, I'll re-visit this episode, armed with much better knowledge of the series!