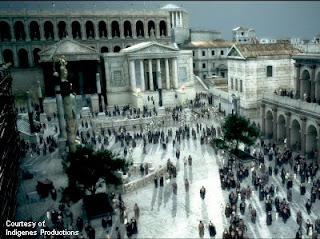 I don't usually review non-fiction, but Hasan Niyazi from Three Pipe Problem kindly sent me a DVD of this French docu-drama, and I couldn't resist the allure of lightly French-accented Latin. The programme has an English voiceover, interspersed with fictionalised dramatic scenes in Latin and a few clips of talking heads speaking French or, in one case, Italian, subtitled in English

The CGI used in just about every shot is a bit off-putting, as it always is in these docu-style productions where the budget doesn't even stretch to a small, I, Claudius-style indoor set. I really think if you can't afford proper sets, you should just put everything in a small room. Dodgy, cheap CGI should only be used when absolutely necessary, like for the eruption of Pompeii.

There narrative is also full of weird inaccuracies. There are professors among the talking heads and what they say is fine (thought they tend to exaggerate a bit and get overly dramatic for the TV). But the writers of the dramatised bit and the main narrative don't seem to have run it past any of the professors. For example, the series claims that Cleopatra was pregnant with Caesar's son at the time of his murder, but unless they're suggesting they had another child who died or was miscarried, this is right out - Caesarion was young, but he'd definitely been born by this point. The map of the Roman Empire shown at the beginning has Britain on it, but Britain shouldn't be added until AD 43, in the reign of Claudius. Julius Caesar just visited, set up alliances with some local kings, and left again.

The narrator claims that when Caesar died, 'According to the plebeians, a god had been murdered and Rome was doomed' - no and no! First of all, 'plebeians' is a very broad category which includes Cicero and Pompey, though it was sometimes used as an insulting way to refer to the masses (this has recently become an issue in British politics, believe it or not, because a politician may or may not have used it as an insult to a policeman - Mary Beard explains Roman plebs in more detail here).

More importantly, Caesar was not proclaimed as a god until Octavian pointed at a meteor that flew over during his commemorative Games and claimed it was Caesar's spirit ascending to the heavens. It was Octavian who deified Caesar, and he very definitely did it after Caesar was dead and after Antony's eulogy for Caesar, in which, in this version, he again says Caesar was a god. The 'Rome was doomed' bit is too general to pick apart, but I doubt anyone thought that either - they were upset because Caesar, a man who turned out to have left generous gifts to the people in his will, had been murdered.

(Speaking of Antony's eulogy, it was fun to see that here, complete with the bit about the blood-stained clothes. I'm still disappointed Rome left that out).

The series also reduces and simplifies a lot. It totally skips the bit where Antony and Octavian fight a war against each other before Phillippi, and Lepidus gets left out completely as well. Are any viewers wondering why one of the professors calls Antony a 'triumvir'?! At then at the end, the narrator proclaims that 'the Roman empire now had two heads' - maybe in effect it did, but technically Lepidus was an equal third of the ruling men. But he often gets left out. Poor Lepidus.

Most of the runtime of Episode 1 is spent on the Battle of Philippi. Since all I really know about the intricate military details of the Battle of Philippi is that Antony, heading his and Octavian's forces and probably helped by Agrippa, won it, I can't really comment much on all the details. I do know that Octavian called in sick for most of the battle, and when Brutus attacked his camp, he wasn't in his tent, but hiding in the marshes. According to the man himself in his (lost, but reported in other sources) memoirs, his doctor had had a dream warning him that he should take extra care that day. The documentary rather misrepresents this as but it gets the gist across - it claims that Octavian had been ill since leaving Rome and that 'he'd been warned in a dream that if he went into battle he would not survive'. I think it's probably safe to assume that what actually happened is, he saw Brutus coming and scarpered, and made up the dream story later.

The episode goes into enormous amounts of detail on the battle with loads of speeches. Roman historians liked to put speeches into their histories - great, lengthy, inspiring speeches. Trouble is, 99% of the time they were making them up. (I can't remember if Caesar included any speeches in his histories, but I'd be willing to give him the benefit of the doubt if he did. In fact, I have a feeling he didn't - which rather implies that all these great military speeches are inventions of the historians rather than representations of reality. Caesar was a great orator, but possibly in a political rather than military context).

The narrative keeps talking about this being a battle of ideas, between republicanism and monarchism, Brutus fighting for 'freedom and the republic', Antony and Octavian upholding Caesar's ideals. But at this point, Antony and Octavian were still maintaining some vestige of the Republic, they're not yet emperors and they're certainly not kings. And I think that the soldiers were fighting for the generals they were loyal to and even more importantly, for whoever was paying them and promising them land when they retired. Maybe some of Brutus' men had more idealistic reasons for fighting, and maybe some of Antony and Octavian's armies were fighting to avenge Caesar's death, but the idea that the whole battle was a war of political ideals seems an overly modern interpretation to me. Calling them 'republican' and 'Caesarian' isn't really accurate either, though I suppose one could argue Brutus was fighting for the republic, and Octavian certainly ended up destroying it.

When it's not being inaccurate, the narration is a bit obvious. 'The carnage and the groans of the dying were atrocious,' the narrator solemnly tells us and the camera pans over a pile of badly-CGI'd corpses after the battle. Well, obviously. At the end, Octavian comes off rather badly, wanting to cut off Brutus' head and show it to the people as proof of victory rather than give him a grand funeral and send his ashes to his mother as Antony wants. That bit's maybe more accurate, though it was supposedly Antony who wanted Cicero's head and hands nailed to the Rostra, so they were probably even on the totally ruthless and a bit gross front.

To be honest, I'm not really overly wild about docu-drama as a concept. I tend to think a thing should be one or the other, fictionalised or not fictionalised. I also tend to avoid documentaries about the ancient world because of their shameless audience-grabbing (look! sex! violence!) and their tendency to elide or exaggerate to the point of inaccuracy. I prefer fictionalised productions, because at least - hopefully - the audience is aware that certain elements have been changed, exaggerated or moved around to serve the fiction and won't take the whole thing too literally. On the other hand, docu-drama is probably the closest modern genre to ancient history (in which events are formed into a narrative telling the story the author wants to tell, full of invented speeches, exaggerations and hearsay) so it's probably hypocritical of me to complain about it!

The problem with this show is, the main value of something like this must be to explain the basic facts from this period, which is rather complicated in terms of military and political history - but the persistent inaccuracies rather reduce its value from that point of view. Still, I really can't resist any combination of French and Latin, and this provides a handy less gory, if not less depressing, alternative to The Passion of the Christ to watch if you want hear and revise spoken Latin.