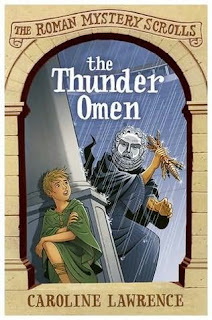 The Thunder Omen is the third in the spin-off series to The Roman Mysteries, The Roman Mystery Scrolls, aimed at younger readers (about 7-10). In this story, Threptus and Floridius find out what happens when you play god(s)... (spoilers follow).

The Thunder Omen is set during my favourite Roman festival, the Saturnalia. I loved the way all the characters greeted each other with, 'Yo, Saturnalia!' This is a perfectly sensible transliteration of  the Latin Saturnalia greeting, 'Io Saturnalia!' - 'Io,' contrary to the way it's used in 'Ding Dong Merrily on High,' should be pronounced 'yo' (just like Julius, spelled in Latin as Iulius, should be pronounced 'Yulius') - and 'yo' is much clearer to read for young children. But I have to confess, the '80s baby in me really got a kick out of everyone saying 'Yo!' to each other! It reminded me of Terry Pratchett's brilliant books about Johnny Maxwell, in which one of Johnny's friends is known as 'Yo-less' because he refuses to say 'Yo.' So that made me very happy!

The book also introduces children to how the sacred chickens actually work, which Lawrence wisely simplifies for young readers. The rule was, if corn fell to the ground from the chickens' mouths when they were feeding, that was a good omen, i.e. if the chickens were so hungry they gobbled up the corn too quickly and some of it fell from their beaks, that was the good omen. Lawrence sensibly simplifies this to make just the chickens eating a good omen, since the whole business with dropping the corn would be too complicated for young readers who, if they're anything like I was at that age, haven't the faintest idea what chickens eat anyway. Floridius and Threptus then explain exactly how ancient chicken keepers would manipulate the omens, by keeping the chickens hungry so that when the time came to look for an omen, the chickens would eat greedily. It's an example of how their trade is occasionally a wee bit close to that of a conman, but an excellent history lesson.

This book does also deal with Threptus and Floridius' distinctly dubious (and historically accurate) practices, as here they go too far, trying to trick a young woman into entering a marriage she doesn't want by faking Jupiter's thunder. Their story is paralleled with the story of Phaethon, who tried to drive his father Apollo's chariot, lost control and set half the earth on fire. Threptus decides that playing god is not a good idea, and confesses everything to the girl (luckily, after he takes her on an outing and she sees her suitor in his natural habitat, she decides she likes him after all, based on his personality and good reputation). It's a good development - a certain amount of trickery is part of Floridius' trade, but Threptus learns here not to go overboard, which ensures that our heroes remain likable and sympathetic.

Perhaps my favourite bit of history in this story though, was the explanation of what a 'vomitorium' is. This is framed by a device in which an older bully has tried to scare Threptus away from the theatre by telling him that rich Romans keep vomitoriums, where they go to throw up during a feast so that they can eat more food - a real misconception about the Roman world that comes up occasionally. Of course, Threptus is relieved to discover that 'vomitorium' is just a fancy word for an entrance or exit (the word 'vomit' is related, for obvious reasons, to words for 'exit'). It's an ingenious use of a real and common mistake to liven up the story at the same time as educating readers on what the word really meant.

As ever, this is a fun and lively visit to ancient Ostia. There are lots of familiar characters that keep the world of the Roman Mysteries rich and well developed; Ostian magistrate Bato's story progresses, Narcissus the handsome pantomime dancer from The Beggar of Volubilis makes an appearance fresh from his tour of North Africa, and we discover a softer side to Naso the bully. There are the usual fun references for grown-ups as well - Bato's mother, for example, is frequently referred to as the Lady in Lavender, so of course I pictured her as Judi Dench. But none of these are needed to understand the story, so young children picking up the book for the first time won't be lost - and hopefully they'll have sneakily been taught a lot more about ancient Rome by the time they've finished!

This was a review copy sent to me by the publisher.