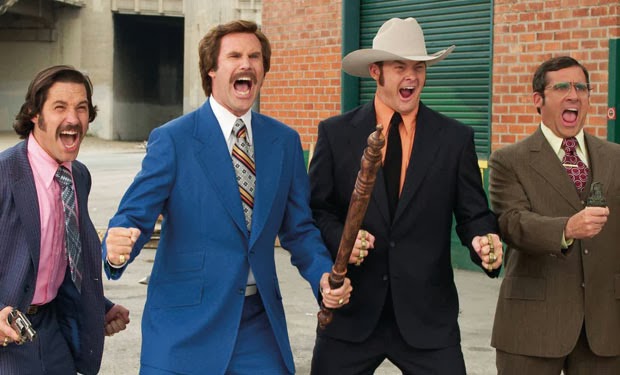 Having finally managed to catch Anchorman: The Legend of Ron Burgandy when it was on TV a few weeks ago, I figured that although I hadn't found it especially hilarious, it was amusing enough that I'd give Anchorman 2 a go at the cinema. (I'm very glad I saw Anchorman 1, if only because I understand a lot more internet memes now, especially those relating to Game of Thrones and bear pits...). I was a bit worried as many reviews suggested it wasn't that funny, and I hadn't laughed much at the first one, but I'm pleased to say that although the film is totally ridiculous, I did laugh plenty at it - it easily passed Mark Kermode's five-laugh test in the first 15-20 minutes.

Spoilers follow. If you haven't seen the film and you plan to, I'd advise you to stop reading now - I'm about to spoil a scene from near the end of the movie, and half the humour and fun of it comes from the element of surprise, so proceed with caution!

The climax of Anchorman 2 is that traditional feature of sequels, a re-run of a popular scene from the first film but making the whole thing bigger. In this case, that means a re-run of the fight scene from the first movie, but with rival national news stations (both US and other nationalities) rather than local ones. The British audience laughed appreciatively when the BBC were the first rival news team to appear, followed by MTV, Entertainment Tonight, ESPN, and the Canadian news team. The cameos are all fun - I especially liked Tina Fey and Amy Poehler as the Entertainment Tonight anchors and Marion Cotillard as the French-language Canadian anchor.

The final rival news team to appear, headed by Liam Neeson, is the History Channel. I loved their justification of their presence on the grounds that they report the news too, just a lot later (or words to that effect). It's at this point, though, that the film goes really crazy, because the History Channel team includes both the ghost of Stonewall Jackson and... a Minotaur.

I've posted before on the bizarre omnipresence of Minotaurs in popular culture, despite the fact that in ancient mythology, there was exactly one Minotaur (because only one queen was crazy enough to want to have sex with a bull).* And here they are again, signalling, alongside the ghost (the existence of ghosts having been firmly denied earlier in the movie) a move into speculative fiction for the duration of this particular scene. To be fair, the film had introduced the idea of Greg Kinnear's Gary's psychic powers in Ron's mis-understanding of psychology earlier in the film (though telekinesis and telepathy are actually different powers) and Brick had already claimed to have been to the future, so it didn't come completely out of nowhere (and the first film's attitude towards the loss of limbs was hardly realistic). Burgandy does also (thankfully) point out that Minotaurs are mythology, not history. The fantasy vibe is completed with the appearance of Kirsten Dunst as (according to her Imdb credit) El Trousias, Maiden of the Clouds. (I thought this was something more Greek-like, maybe Altrousias, myself). Her costume is clearly inspired by Greek mythology, complete with winged helmet reminiscent of Nike (Victory)'s wings or Hermes' boots, Greek-style white dress, crazy blonde curly hair that in no way resembles a typical Greek look but is, for some unknown reason, associated with Greek mythology in popular culture (I blame Alexander the Great) and a Classical-looking trumpet thing. The fact that she's a maiden clinches it, as generally the Greek goddesses associated with exciting things like hunting, warfare and so on had to be eternal maidens.

(I don't think she's an angel, by the way, as Wikipedia is currently claiming. That is a Greek goddess, or daimon, or nymph, or spirit, or something - probably a goddess. I suppose the trumpet, wings and curly blonde hair look a bit angelic, and of course angel imagery and the word 'angel' have Classical roots, but I still think she's clearly part of pagan, not Christian, mythology).

The use of mythological figures, aside from being intended to be funny, is used to lift the scene completely out of the realms of reality and warn the audience to expect extreme craziness for the next few minutes. Whereas the first film's fight was followed with the well known 'Boy, that escalated quickly' and an acknowledgement that serious things had happened and Brick should probably lie low for a while, this second fight blows up half of Central Park, and these mythological figures ask us not to care or worry too much about that. The Anchorman films have never been realistic, but the appearance of a Minotaur, a goddess and a werewolf ask us to accept the film's conclusion (including explosions, improbable journey times across New York City and a whole thing with a shark) with an even greater suspension of disbelief than usual - and also to refrain from asking questions about the future of Ron and Veronica's careers now that she's been fired and Ron has seriously annoyed the screen's latest Rupert Murdoch-clone (someday I'll add up all the Rupert Murdoch clones that have appeared on TV and film over the last 30-40 years. There'll be a lot of them).

As I said above, I enjoyed this film, including the craziness of the final fight scene - after all, I'd hardly been taking it seriously before. I would understand, though, if some found the inclusion of mythical creatures a step too far in a series that had so far been slightly more tethered to the real world. Even the science fiction elements (Brick's gun from the future) feel slightly more plausible in context that the pure fantasy of a Minotaur and a goddess. And I really hope that, however everyone feels about their inclusion here, we can all agree that enough is enough with the Minotaurs. I am calling for a complete moratorium on Minotaurs in popular culture. Surely, this is the apex of their strange popularity - we must be done with them now!