Oedipal themes in Angel: the Series 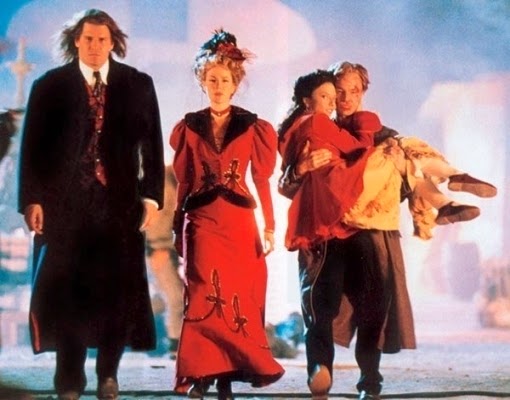 There's something inherently Oedipal about modern romantic vampire mythology. When Byron's friend Polidori wrote about a sexy, beautiful 'vampyre' who preys on the protagonist's sister, he paved the way for later stories to depict vampirism as a metaphor for lust and the act of a vampire biting a victim as a metaphor for sex. Once the concept of the vampire sire had been developed, what you end up with in several modern vampire mythologies is a depiction of vampire 'families' consisting of 'parents' (the sire or sires) and 'children' (the vampires they've sired) in which the 'family' has been created by a process of the 'parent' having metaphorical sex with the 'child' (often accompanied by literal sex). The entire set-up revolves around the idea that the 'child' and 'parent' are sexually attracted to each other.

Buffy the Vampire Slayer and Angel play up this theme even more than many modern romantic vampire series, partly thanks to the presence of Drusilla in Angel's vampire 'family'. Drusilla's madness is depicted largely as making her child-like, fond of dolls and parties (and, er, children), so while Spike refers to the sire/offspring relationship as 'you were my Yoda' early on, implying more of a teacher/protegee relationship, Drusilla always comes across as the child in a twisted 'family'. She also refers to herself and the others that way more than most, explicitly calling Angelus 'Daddy' while cheating on Spike (later revealed to be her 'son' rather than, as initially implied, her 'brother') with him.

Later, when Drusilla appears on Angel to re-sire Angel's now human 'mother' Darla, Gunn again makes the relationship explicit by commenting on how weird it is that Darla's 'grand-daughter' is becoming her 'mother'. Meanwhile Drusilla buries Darla in a flower nursery, just to really drive home the mother/daughter point, before they embark on a killing spree so full of sexual tension between the two of them it's hardly surprising when a later flashback in season five reveals they have had a sexual relationship at least once, when they had a threesome with the Immortal. With season five also implying pretty strongly that Angel and Spike have got it together at least once, the whole 'family' is more twisted and incestuous than anything seen on HBO. 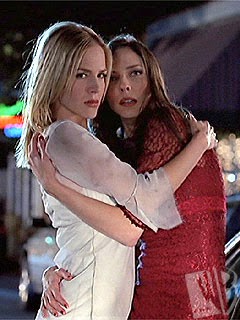 Angel, however, was not satisfied with the just the bog-standard Oedipal vampire 'family' - the show played with Oedipus complexes all over the place. Back on Buffy, Spike's relationship with his biological mother took vampiric Oedipal issues one step further when, as Giles would say, the subtext became the text and his newly sired mother (sired by Spike himself, making him 'lover', 'son' and 'father' all at once already) actually tried to come on to him, at which point he staked her (i.e. he shoved his hard pointy stick into her, which does not improve the situation, in Freudian terms). After Spike's move to Angel, Wesley re-enacts the other, less sexy, part of the Oedipus complex when he kills what he thinks is his father to save Fred; Spike's attempts to sympathise by telling him about his mum do not go down well.

The mother (hah!) of all Oedipus complexes on Angel, though, is only tangentially related to vampirism, though it does involve alternate dimensions and creepy god-like beings. When Darla kills herself to save her and Angel's son Connor, the baby is cared for by everyone at Angel Investigations including Cordelia, in whom Angel is clearly romantically interested. To cut a long story short, Connor ends up growing up in a demon dimension and coming back as a petulant teen, Cordelia gets possessed by an evil god-like thing, and they end up having sex so that the thing that made sure Connor was born in the first place can give birth to itself through Cordelia. Connor turns out to be impervious to the adoration his daughter Jasmine induces in everyone else, but Angel isn't, and ends up worshipping the ground his own grand-daughter walks on for a while, until Fred 'cures' him and Jasmine is eventually killed by her father, Connor.

Connor doesn't know about Cordelia being possessed by Jasmine at the time they have sex, but he does know how close Cordelia and his father - whom he makes several different attempts to kill - are, and that she looked after him as a baby. Eventually, Oedipus Rex finally gets a proper shout-out when the temporarily-returned Angelus tells Connor 'I mean, when you think about it, the first woman you boned is the closest thing you've ever had to a mother. Doing your mom and trying to kill your dad. There should be a play.'

Angel's interest in the Oedipus complex, then, seems to go a bit beyond the Oedipal themes that inevitably come up in romanticised vampire fiction. That's partly because, unlike many pop culture references to the Oedipus complex which focus only on the enticingly taboo wanting-to-have-sex-with-your-mother part, Angel is equally interested in the wanting-to-kill-your-father part (and of course, when Drusilla sires Darla she is both having metaphorical sex with and literally killing her 'grand-mother'). Because Angel is all about brooding and feeling guilty over past crimes, past relationships and bad decisions, it's just as interested in ruined and destructive relationships as it is in overly-close ones.

All these Oedipal issues may also be a simple result of taking common TV themes one step further than usual, in the heightened reality of the fantasy setting. Many modern TV shows represent a group of unrelated characters forming an ad hoc 'family' in the absence (for whatever reason) of their actual relatives, and friendship is depicted as 'family' in everything from Sex and the City to Community ('When you guys first came in, we were as wholesome as the family in The Brady Bunch. Now we're as dysfunctional and incestuous as the cast of The Brady Bunch'). TV shows also tend to pair off the characters in small casts to create romantic and sexual tension, so perhaps, once Angel's almost-grown-up son was thrown into the mix, Oedipal issues became inevitable even without the vampiric background. All the same, the sheer variety of Oedipal issues floating around on Angel are notable, and it certainly confirms the capacity for vampire fiction to deal with taboo subjects through metaphor in a much more explicit way than most non-cable prime-time American TV shows.