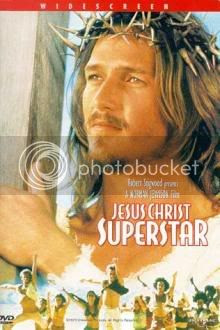 It's late evening on the Bank Holiday and I've just managed to finish the final draft of the thesis and send it to my supervisor. I now have one month to fiddle with it and get it up to standard... After all that typing, I mustn't spend too long on this post, or my fingers will fall off!

Jesus Christ Superstar is Andrew Lloyd Webber's early rock opera, much of which looks at the Passion story from Judas' point of view (until he necessarily disappears towards the end). The film was made in 1973 and is the only Jesus film I've seen which actually filmed in Israel, rather than in a ninth-century Tunisian fortress or in Morocco.

The reason this was possible is that the film does not try to replicate first century Palestine, but is filmed chiefly in modern dress among the ruins. I rather like the modern dress idea and I love seeing the actual Roman ruins, rather than sets or Islamic fortresses. I do find it interesting that Jesus is the only character to wear a more traditional costume, perhaps to make him seem less connected to everyone else. The other problem with the modern dress, of course, is that 'modern' in this case means the 1970s, so some of the costumes are rather interesting and the movie looks more dated than it otherwise would.

There are plenty of fascinating theological issues I could discuss, but as usual, I'll stick to my academic area of expertise and focus on the movie's depiction of Rome and the Romans. The film makes great use of its Roman locations, with some spectacular dance numbers set in the open ruins, while Pilate's audience with the people takes place in an amphitheatre.

Most of the cast wear hippie style 70s fashion, but the Roman guards, although they are not in

Roman dress, are given a uniform. They have been allowed to keep their long 70s hair, but it is hidden under somewhat bucket-like helmets, and they wear khaki trousers to indicate that they are the military, and purple vests to show that they are Roman. Purple dye was quite expensive in the ancient world, and was associated with power, being a colour worn particularly (though not exclusively) by the upper classes, and especially by emperors. It is this association with power that makes it especially suitable for the army in the film.

Pilate, to indicate his especially high status, wears purple velvet, with a red velvet cloak over it. He, Jesus and the Jewish priests are given costumes rather than basic 70s clothing; while Jesus is in a traditional (very clean) white robe, Pilate wears a costume that (deliberately) looks a bit like something your Mum might put together for you to play a Roman in school, while the priests wear some absolutely fantastic, crazy-looking costumes that make them look like vultures (again, this is not a theological statement, I just think they look cool!).

Pilate wears a reddish velvet cloak over his purple velvet (which clashes), which evokes the bloodshed of the final act (emphasised especially when he washes his hands of the situation... in a glass bowl). He also wears a rather lovely golden laurel wreath. Laural wreaths were prizes in 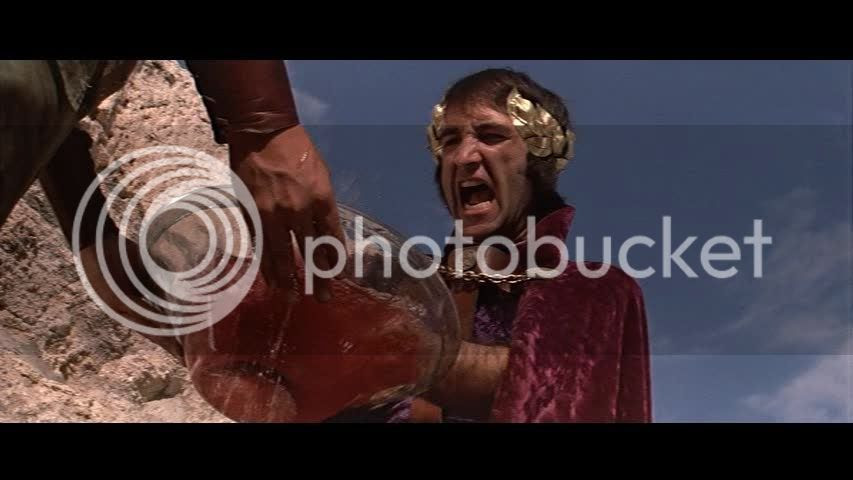 much older Greek athletic competitions, while Caesar made a point of refusing a crown in public to avoid looking like a monarch (although he was a dictator, he was careful never to call himself a king). Like the rest of Pilate's costume, this is not related to actual Roman dress, but to modern perceptions of what it is to be Roman.

One final point about the Romans in this film - they are by far the most stern and sober characters in the movie. Jesus' disciples are the characters the 70s audience is encouraged to identify with, carefree, energetic and eating something highly dubious (the lyrics to the song accompanying the Last Supper include 'what's that in the bread, it's gone to my head'). The priests are stern enough, but obsessed with this man that they perceive as a threat, while Herod is clearly off his face and completely hilarious. The Roman soldiers behave in a similar way to those in the Life of Brian - they mostly passively observe events, with occasional expressions of exasperation, until they are forced, reluctantly, to intervene. They are also solely represented by the army - Pilate's wife's dream has be

en given to Pilate, so every Roman character is a soldier on duty. They are a sinister occupying force, a police force, a controlled backdrop and a threat all in one.

Annas and Caiaphas, in rather exciting costumes
I love this film - I love the musical and I think the performances here, especially Ted Neeley as Jesus, Carl Anderson as Judas and Barry Dennan as Pontius Pilate, are breathtaking. There's a powerful moment during Jesus' solo 'Gethsemane' which uses Renaissance art to beautiful effect to depict the horror of crucifixion, the contrast between Caiaphas' bass and Annas' counter tenor is brilliant and I can forgive it for not showing the Resurrection - it is a Passion play after all, and one told from a distinctly agnostic point of view at that. There's also a lovely touch when we see the actors get back on the bus they arrived on, but without Jesus (well, either its lovely or they've actually crucified and abandoned him, but I think they were going for a spiritual effect, and Ted Neeley seems perfectly healthy on the DVD commentary!). As the film ends, watch out for a shepherd who, by pure coincidence, wandered across in front of the camera as they filmed the final shot - it's a bit fuzzy on the video, but clearer on the DVD.
Biblical stories Films Life stuff Roman history