There's a brand new adaptation of Ben-Hur opening live at the O2 arena (known to most of us as the Millennium Dome) tomorrow. The BBC showed some footage of rehearsals on their website and it looks amazing - they have real live horses in an actual chariot race! (Hopefully one that is light on violence). I have no idea what it will turn out to be like, but it looks very cool. In honour of this intriguing show, I thought I'd post a few thoughts on the best-known adaptation of Ben-Hur, the 1959 film directed by William Wyler. This won't be a full re-cap/review of all four hours or so of Ben-Hur, because of the whole thesis-near-completion thing; just a reflection on some of the bits from the film that stood out the most to me (I'm sure I'll return to it and give it a proper review at a later date).

The most memorable bit, of course, is the chariot race. I first saw Ben-Hur when I was about 12 or 13 I think (the period when I knew nothing about Classics). By the time we got to the chariot race, I think I had completely lost track of the plot, but when the drivers rode out into the circus, I was excited! There were only two problems with actually watching it. One was my persistent sqeuamishness. I kept hiding my eyes, and as soon as Messala was injured, I couldn't look at him any more and treated the film like a radio show. The other problem was a childhood spent watching Popeye cartoons. As soon as the blades came out of Messala's chariot wheels, all I could see in my head was Popeye and Bluto - I expected Olive Oil to start screaming at Ben-Hur from among the spectators.

It's been a while since I've seen the film, but I can still see in my mind's eye several moments from the chariot race. It's a great, old-fashioned spectacle and an amazing set-piece - plus it wakes up the audience at a point in the film where they're probably starting to nod off...

The other bit of the film that my brother (who is three years younger than me) and I really enjoyed and remembered from our first viewing of the film was the section aboard the galley. We were fascinated by the design and running of the galley. I think that up till this point we had imagined that all pre-steam ships got around using only the wind in their sails. We also loved the way the overseer kept time with his rhythmic pounding. It was oppressive, creepy but very effective and strangely hypnotic (and my brother, who is now a professional musician, was already interested in rhythm and uses of rhythm). Being sick-minded children at heart (as most children are) we also rather liked the part where the overseer nearly kills the slaves (possibly does kill one?) by making them row ridiculously fast, just to test them. Finally, we loved the 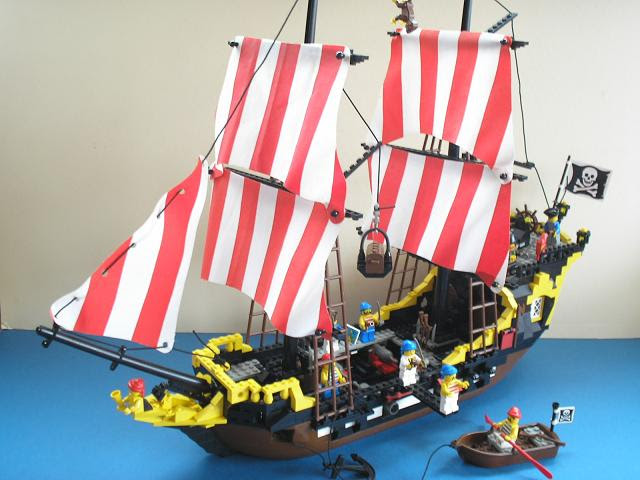 climax of the sequence, first the reprise of the cry 'ramming speed!' and then the destruction of the galley through being rammed by another ship. I think we recreated that one in lego a few times.

The classic Lego Pirate Ship - perfect for recreating a galley being rammed
Of course, the subtitle of the film is A Tale of the Christ. I very much like the depiction of Jesus here (as far as I remember it!). I believe that showing Jesus only from behind was a fairly common technique in early 20th century films, but as yet I haven't seen any others that use it, as I haven't yet seen any of the earlier films. I think it works well, especially for a film that is really about Ben-Hur himself, whatever the subtitle says. The parallel scenes of Jesus and Ben-Hur offering each other water are nicely done and I like the fact that Jesus is barely in the rest of the film - Ben-Hur gets on with his life and his encounters with Jesus are just part of the world he lives in (albeit a rather important part). I remember the ending as being perhaps a little overly melodramatic, and the movie's depiction of leprosy being, well, less than authentic, but the scenes between the human Ben-Hur and the human Jesus are simple and sweet.

Well, those are the parts of the film that really made an impression on me (along with everyone else, I suspect). There are other things I remember - the frustratingly ridiculous tile incident that kicks off the whole plot, the views of ancient Rome, brief appearences by Tiberius and Pontius Pilate - and other things I've learned more about later - mainly the supposed homoeroticism between Ben-Hur and Messala (not what Charlton Heston was going for). I'm sure there's also lots more of academic interest to discuss, and I suspect that if I watched the film again I would spot lots and lots of incidences of artistic licence being taken (or stuff that's just plain wrong!). I'll leave it there for now, with my dim memories of enjoying an exciting film on a long afternoon during the summer holidays, and come back to the film again in a little while, when I've had a chance to watch and enjoy it all over again.
Biblical stories Films Roman history Slavery