The Oracles' tenure on Angel was pretty short-lived. They were introduced as a handy plot device in 'I Will Remember You', a first season episode that's a fan favourite and that I'm very fond of, but I have to confess the description I read of it once (I can't remember where I'm afraid, but it might have been Keith Toppings' Unoffical Guide) that it's basically fan fiction made canon is rather accurate. First, someone needs to explain the plot to Angel, then later and more importantly, someone or something has to turn back time for him.

Enter the Oracles, who fulfil this function in a nicely detached manner. There's nothing specifically Classical about oracles - various cultures have them, though the English word is from Latin. The term 'oracle' refers to a shrine where it is believed that the gods, or a god, answer questions. Sometimes they do so through a human being who speaks, often saying unintelligible things which are 'interpreted' by the priests, or the god might speak through wind or water, or through dreams. The human variety is probably the best known.

These are certainly not Classical in that sense, as these two are not humans, but higher beings of some kind. They exist in some parallel dimension and say things like 'I like time' when given a watch. They also require gift-offerings - that's more common, as a visit to an or 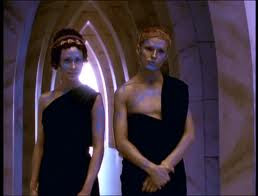 acle would usually require a sacrifice and possibly a financial donation as well.

What makes Angel's Oracles Classical is their aesthetic. I'm not sure what's with the weird face paint, but the loose tunics are definitely meant to look vaguely Greco-Roman, as is the marble building they're in (though the arches are all wrong - they're pointed, which looks more like medieval gothic).

The motto over the gateway is also written in Greek. It's supposed to say 'Gateway of Lost Souls' apparently, but as far as I can tell it actually says 'Gate through/because of (dependant on case, which is impossible to tell here) [word 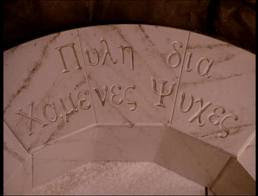 that I can't track down without spending a few hours with a big dictionary] [word that sounds like psuche, soul, but doesn't match any of the case endings for psuche].

The Oracles are bit wasted in this show. They're a fun concept (though Angel does tend to chat to the Powers That Be a bit too often) and the actors are good, nice and quirky, with some fun dialogue. But they only appear twice more; in 'Parting Gifts', to explain why they won't turn back time every time something bad happens, and then they get murdered in 'To Shanshu in LA'. I'm not sure what kind of higher being can be killed with a scythe, but there we go. It's a shame - with some better Greek classes and a bit more to do beyone plot exposition/device, they could have been fun.

Hmm, two Joss Whedon posts in a row. I must branch out next time.
Ancient religion Buffy/Angel Sci-Fi and Fantasy TV Vampires