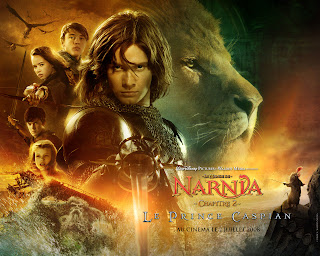 It is hardly surprising, then, that Adamson gets pretty creative in adapting the story for film. Some changes work better than others. I love the shot of the unnamed Tarva and Alambil at the beginning, but I really feel no children's movie should open with a childbirth scene, no matter how crucial it is to the plot. The extra castle sequence is rather good, introducing some nice dramatic tension between Caspian and Peter (who get on irritatingly well in the book) and, best of all, Edmund finally gets to skewer the White Witch. However, the less said about the hideous attempt at romance between Caspian and Susan, the better.

All the mythological creatures in Prince Caspian, from various mythologies, stand for religion and spirituality against the secular Telmarines. It is somewhat appropriate, therefore, that the eternally plural minotaurs are now on our side (they were bad guys in the previous film). Old emneties are laid aside and no creature here is 'good' or 'evil' - unlike the diametrically opposed armies of good and evil in The Lion, the Witch and the Wardrobe, there is good and bad on both sides here (and the film has sensibly played down Lewis' unfortunate implication from the book that black dwarves and bad and red ones good). The minotaurs are also a potent symbol of the fact that monstrous does not equal bad and I confess, I actually well up when the one minotaur 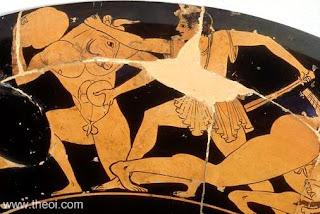 holds up the portcullis at Miraz' castle despite being full of arrows and sacrifices himself so our heroes can escape. I dread to think how many times Pasiphae had relations with that bull, though, to produce such a large group of minotaur progeny.

The bulk of the army is, once again, made up of centaurs and fauns, because they look the most human and can wear bits of armour. In fact, the centaurs seem to be largely in charge during the castle attack, since Peter and Caspian are competing for who can be more incompetent (love the use of Edmund's electric torch though). It seems a shame that the films insist that an army isn't an army unless it's got human-looking creatures in it, since you'd think an army of animals, all with different strengths, would be quite cool. I guess British woodland creatures aren't quite tough enough. The centaurs are also used to provide some family drama and add to the 'war is hell' motif. They've been chosen for this purpose because of their human-like looks, and because female fauns are pretty few and far between (if they exist at all - I've always imagined fauns and satyrs pair up with nymphs and dryads, and I think that fits with the original Greek versions as well). I think we could have been equally affected by, say, a bereaved family of mice or badgers or squirrels, but there we go, it works fine with centaurs too. Though I can't help feeling that child centaurs (boy or girl) should be given T-shirts or something, they don't look right, wandering around topless.

The architecture in the temple-like section of Aslan's How is rather good. It doesn't look to me like it's emulating any one particular style (unless it's one I'm less familiar with) but it gets across a general sense of ancient religion. The large reliefs of Aslan, in particular, and the random but cool sections of fire that light the place are very effective - to me, they are almost evocative of ancient Egyptian temple architecture, though without actually being very Egyptian. It certainly drives home the point that Aslan is the god of the Narnians and the Stone Table is his altar (I know this may seem obvious, but I had absolutely no idea that that was what it was supposed to be when I was a child).

When Lucy first sees Aslan here, the audience does not, and when she first meets with him in the woods, it happens in a dream, which creates a much more interesting dilemma for the other characters and the audience. If the audience is shown the same clear sight of Aslan that Lucy sees, the central point about faith is rather lost, since we know she's right - we saw it. By hiding Aslan from the audience, and showing him only in dream sequences, the film forces the audience to question Lucy's sanity/eyesight as well, and it makes the final, real meeting between her and Aslan that much more powerful.

The use of the river god is very effective and makes a nicely dramatic ending. It also makes me wonder, for the umpteenth time, how Achilles could possibly fight a river towards the end of the Iliad. After all, how can you fight water, except with a lot of fire?! (Presumably Achilles was fighting the spirit of the river in human form, it's been a few years since I read that part of the Iliad - it still doesn't make a whole load of sense though).

Prince Caspian is, perhaps, not quite as successful as The Lion, the Witch and the Wardrobe, but it does a very good job with a difficult book and has some really brilliant moments (many of them involving Edmund and Lucy, the only two characters thinking straight for much of the story). The fleshing out of important minor characters like Queen Prunaprismia and Glozelle and Sopespian is rather 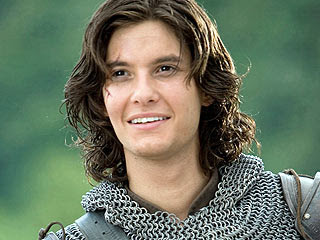 good and the scene with the werewolf and the hag trying to call up the Witch, always a highlight, is fantastic. Warwick Davis suddenly turns from Reepicheep (in the TV series) to Nikabrik, which is confusing, but he's excellent as ever. Caspian's pretty easy on the eyes, too (he's far too old compared to the book, but I'm not complaining!). From the latest trailer for The Voyage of the Dawn Treader, it looks like that's been pretty heavily 'adapted' (i.e. totally changed) as well, so let's hope the adaptations are as successful.
CS Lewis Films Mythology Narnia Sci-Fi and Fantasy