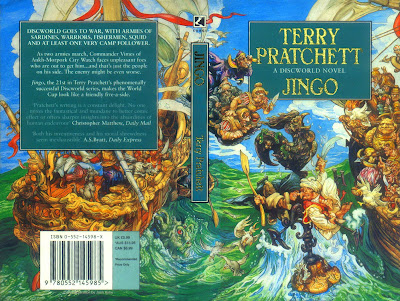 Over at Tor.com, Liz Bourke posted last week on SFF and the myth of Atlantis - and I suddenly realised that in more than a year and half, I hadn't yet posted anything on Atlantis. I nearly talked about it for World Oceans Day last year, but I wanted to post on Stephen Lawhead's books,and didn't have time to re-read them (and still haven't!).

Atlantis is one of those Platonic myths that may or may not be an invention of Plato (rather than a definitely authorless, orally transmitted story - though it's possible it was that as well). It seems to crop up mostly in science fiction and fantasy - not surprising, given that it's a myth, but I would have thought this story was ripe for the Troy-type treatment as well. I'm sure someone, somewhere has done a more realistic-style re-telling of it, I just haven't seen it yet.

I posted very briefly on the Latin in Jingo way back when I first started the blog, but I didn't talk about the Atlantis connection. Plato's myth of Atlantis is about a nation who tried to conquer the world and were punished for it - perhaps divinely - after their defeat by Athens; it is a warning against excessive imperialism. This makes it the perfect basis for Jingo, in which Commander Vimes and Lord Vetinari struggle to prevent a war between Ankh-Morpork and Klatch. Jingoism is not quite the same as imperialism - imperialism is the drive to conquer as many other countries as possible by military means, whereas jingoism is more to do with the glorification one's own nation and military and the criticism of others - to the point of playing down the military threat of another country and playing up one's own military prowess - largely in mental attitudes and propaganda. Clearly, the two are intimately connected and the one often leads to the other! The particular form of jingoism that Pratchett targets in this novel relates mainly, though not exclusively, to British attitudes during the First World War. (There are numerous other conflicts reflected in the novel, but Lord Rust in particular seems to be straight out of the early twentieth century to me).

(Going off on a tangent for a moment, this reminds me of one of many excellent quotes from Blackadder Goes Forth:

Lieutenant George: The war started because of the vile Hun and his villainous empire-building.
Captain Blackadder: George, the British Empire at present covers a quarter of the globe, while the German Empire consists of a small sausage factory in Tanganiki. I hardly think that we can be entirely absolved of blame on the imperialistic front.

The whole scene is very funny and accurate description of the causes of the First World War - much more entertaining than History lessons on the subject - and can be read here).

It is, then, highly appropriate that the cause of the renewed tensions between Ankh-Morpork and Klatch is the reappearance of the Discworld's Atlantis, the lost island of Leshp. The major difference between the Discworld version and the Platonic version, though, is that Leshp has sunk through no fault of its own, and the inhabitants seem to have had little to do with the military problem (and when it reappears, the only inhabitants are fish and curious squid, who quickly abandon it, so they're a non-issue). Leshp sank - then rose, then sank again - because of a scientific phenomenon, not as a punishment (divine or otherwise) for the hubris of its inhabitants, and it is the other countries fighting over it who are engaging in imperialistic ambitions.

In this respect, as various wikis describe, Leshp has more in common with Ferdinandea, an island which apparently appears and disappears near Sicily and was disputed between several countries when it last emerged. This certainly parallels Leshp, but I think there's more than a touch of Atlantis about Leshp as well. I don't have my copy on me at the moment so I can't check, but if memory serves, the island of Leshp is full of interesting architecture, art and at least one weathervane. I don't think we're supposed to imagine that this is the work of the curious squid - unlike Ferdinandea, Leshp was once a thriving city, and did not pop up and down regularly, but stayed at the surface long enough for people to colonise it. This strikes me as very Atlantean. The tragedy of the lost civilisation and the haunting strcutures left at the bottom of the sea, home to the fish and the squid, is the tragedy of the Platonic myth - and, of course, if anyone had managed to re-colonise it, they would have met the same fate as the Atlanteans.
Books Discworld Mythology Philosophy Sci-Fi and Fantasy