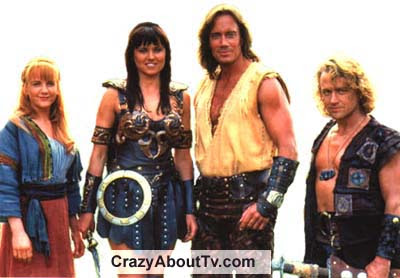 This was a rather good episode of Xena, which was about equal parts really nice ideas and utter silliness.

This is one those episodes that is largely based on genuine Greek mythology, in this case, the story of the Titan Prometheus, who was chained to a rock and had his magically regenerating liver torn out and eaten by an eagle every day, until Heracles set him free. Here, we get to see Prometheus, suitably Titan-sized, and very appropriately, this is the first episode to feature the heroes of Xena's parent show, Hercules and Iolaus. A lot of the character interaction would mean a whole lot more to me if I'd ever watched Hercules: The Legendary Journeys, but the script neatly fills us in on most of the basics and it helps that Gabrielle is meeting Hercules and Iolaus for the first time as well, so the introductions feel natural. The only thing I thought might make more sense if I knew Hercules was the ending. The four of them seem to be getting on rather well in a cute double-dating kinda way, so why exactly don't they just hang around, travelling and killing bad guys, together?

The episode adds to the mythology by suggesting that, as long as Prometheus was bound, mankind would lose the gifts he gave them, which in this case includes both fire and the ability for bodies to heal. In Greek myth, Apollo was the god of healing and his son Asclepius the god of medicine, but this alteration works rather well for the show, considerably upping the stakes. Of course, in Greek myth the idea of losing Prometheus' gifts could never have worked, as Prometheus was chained for goodness knows how long before Hercules rescued him and civilization wouldn't have got very far without fire, but it works well for an episode in which he only has to be chained up for 45 minutes. Hercules seemed to mention Hera at one point - it was Zeus who bound Prometheus, but Hera was the one who liked to make life difficult for Hercules, so presumably she's supposed to be responsible for making the liberation of Prometheus a suicide mission for him (except it isn't of course), which makes sense.

So far, so good - but there are some other, more 'interesting' choices. Most egregriously, Prometheus is specifically stated to have given mankind fire, as in the usual form of the myth, and Gabrielle's torch bursts dramatically into flames when Prometheus is freed. But how come the torch was alight at all in the first place?! They should have been stuck in the dark, or had to find magic glowy things, or maybe just not had to go into a cave, or something. At another point, Xena realises something's up when her emergency tracheotomy, performed with no antispetic or anasthetic with a knife she'd just killed some people with, doesn't work. Apparently it's always worked before. Seriously? Never mind Asclepius, she must be a deity of healing and medicine if that's true! Which would also explain how she can survive being battered against rocks as if she were Homer Simpson. Then there's the bizarre dinosaur-looking thing, which has replaced the giant eagle of the myth, and which lays giant green eggs containing humanoid, violent offspring. Why? No one knows... There's also a very strange oracle involving potentially hand-chopping tests and dancing girls, which is best left alone I think; a sword in the stone bit that looks like it wandered out of an Arthurian legend and got lost, and a reference to Athens as the best place to learn to be a bard, which I guess is sort of logical though, as far as I remember, hardly any of the surviving epic poets (whose preferred literary form is closest to what a bard might sing) come from Athens. 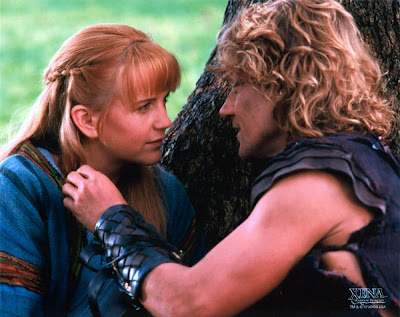 The nicest and most thoughtful part of the episode, however, wasn't related to the myth of Prometheus, but to one of Plato's philosophical 'myths'. I'm putting that in inverted commas because I'm not sure that these stories of Plato's really count as myths - they seem more likely to be parables or fables of a sort, stories invented by a specific author to get across a specific philosophical point (depending of course, on whether or not Plato invented the story, which is rather hard to tell). This one, told by Gabrielle to an injured Iolaus, is from the Symposium, the dialogue on Love. Plato has Aristophanes tell a story about how men used to have four legs and two heads and Zeus cut them in half, and they always long to be reunited with their other half. Plato's Aristophanes is using this story to explain why the best type of love is love between two males - Xena alters it a bit by adding that the soul was also split in half, and that each person is looking for the other part of their soul (implied, in this episode, to be in a member of the opposite gender, but not necessarily so). This is rather sweet, and Rennee O'Connor delivers it well. The emphasis on the link with another's soul makes the whole thing rather sweetly romantic - which Plato's example is supposed to be as well, but it takes Aristophanes rather longer to explain it. The single word 'soul' gets the concept across much more efficiently.

Overall an enjoyable episode, if slightly hampered by moments of the sort of silliness that appears to be unintentional, and therefore comes across as rather annoyingly daft. I did spot a wonderful bit of deliberate silliness right at the end though. Way down at the bottom of the 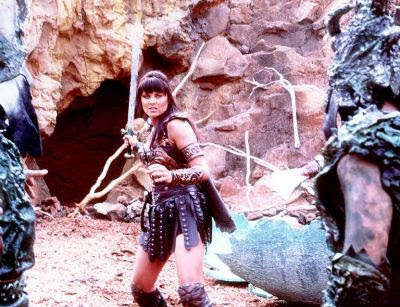 credits, in the spot where we are normally assured that no animals were harmed making the show, was this notice:

'Iolaus was harmed during the production of this motion picture. However, the Green Egg Men went on to live long and prosperous lives.'