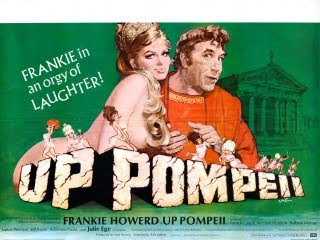 Up Pompeii! was a television series which ran for a couple of years on the BBC in 1969-1970, with this film following in 1971. It was inspired by Frankie Howerd’s performance onstage as Pseudolus in A Funny Thing Happened on the Way to the Forum. This musical (there’s a film too) is very good and based loosely on some of Plautus’ actual surviving comedies from the Roman republic – I saw it years ago and don’t remember it very well, but it’s a good show. Up Pompeii!, on the other hand, is composed entirely of sub-Carry On humour (from Talbot Rothwell Carry On producer), mostly involving terrible puns and sex-mad, gorgeous women.

To be fair, this is not really that desperately far from Plautus. Plautus’ comedies are often a bit like Jeeves and Wooster in ancient Rome with added naughty jokes, except the young men are usually getting their slaves to help them get married to the right girl, rather than avoid marriage all together. Up Pompeii! does revolve around Lurcio’s attempts to help his effeminate young master get the girl and prevent a plot to assassinate Nero, but the emphasis is so much more heavily on sex jokes and so much lighter on Lurcio’s cleverness that it doesn’t feel entirely Plautine.

The plot, such as it is, involves a plot to assassinate Nero and the eruption of Pompeii, which tells you a lot – I don’t there’s much point discussing accuracy and inaccuracy here (Vesuvius erupted during the reign of Titus, over a decade after the death of Nero).

The way broad comedy like this tends to work is to think of all the main things people might know about ancient Rome – indeed, about the ancient world as a whole – and bung them all in, in the hope of raising a laugh. Nero is the best known of the mad emperors, so he usually makes an appearance (see also Doctor Who: The Romans) and of course the eruption of Vesuvius is one of the best known events from the whole Roman period, so the series was set in Pompeii and the film covers the eruption (see also Doctor Who: The Fires of Pompeii – not a comedy, but following the same principle of finding the most recognisable bits of ancient history to play with). Oddly enough, Nero is much more sane (and older) than usual, perhaps because the plot requires that we sympathise with those trying to prevent his assassination.

In the spirit of throwing in anything people might have heard of from the ancient world as a whole, the film also features a soothsayer called Cassandra who, of course, prophesies the destruction of Pompeii and, of course, no one believes her. Since Cassandras who prophesy truth no one believes pop up everywhere from an alien abductee in The X-Files, to a computer in Red Dwarf, to a girl with a heart defect in Buffy the Vampire Slayer, the fact that Cassandra is both mythical and Trojan probably shouldn’t bother us here.

The film does include some nice touches. I rather like the narration by a giant Lurcio, standing over a model of Pompeii complete with smoking volcano, and the joke about how they thought of having an intermission, but the film isn’t really long enough to bother (ancient-set epics having something of a tendency towards being very, very long and needing to provide everyone with a five-minute toilet break in the middle). I quite like Lurcio’s prison tunic with arrows motif as well. While in prison, Lurcio meets some condemned Christians, depicted as hippies, which is both amusing and somehow seems appropriate. And, of course, Lurcio and the Christians use a model horse made of a wine casket in their prison escape attempt (unfortunately they make the same mistake as Sir Bedevere and the knights, and forget to get in it).

Best of all is Nero's final line. As he and his female companion watch Pompeii collapse, it is implied he caused it, and he says 'wait till you see what I've planned for Rome.' Total nonsense (unless Nero has an alien device for blowing up volcanoes we don't know about) but somehow it works, and it realigns Nero with more usual representations of him.

On the other hand, the sex and gender humour is all hopelessly outdated, and Lurcio probably wouldn’t cover himself in soot and pretend to be a Nubian if the film were re-made today.

The final sequence of the film depicts the eruption of Pompeii (inaccurately, geologically speaking), an interesting choice for a comedy. Ludicrous Sextus (Lurcio’s master) and his family are caught in compromising positions, while Lurcio himself takes on a noble pose as the town collapses around him. We then see Howerd as a modern tour guide showing visitors Erotica in the middle of sex, Ludicrous in conversation and so on. We hear echoing voices of the Roman 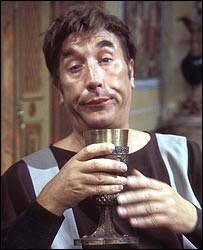 characters as their actors play their modern counterparts, which is almost touching and even a little sad, while funny too. I’m not really sure how completely successful this is – the death of hundreds of people is hardly a good subject for laughs – but it is certainly memorable. Perhaps the living modern characters lift the tone enough to make up for the large scale death and destruction.

Overall, though, this is the usual somewhat random hotch-potch of ancient Stuff with some interesting ideas. It was funnier than I was expecting (I laughed at least five times, which means it passes Mark Kermode's test for a reasonably successful comedy) but I suspect, really, it's just not funny enough to be good. Watch with alcohol and don't expect too much.
British sitcoms Comedy Films Roman history Trojan War