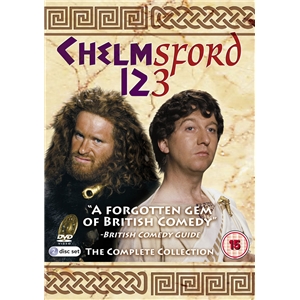 Perhaps it's because they got rid of Badvok's irritating girlfriend, perhaps the writing was just getting sharper with time, but Series 2 of Chelmsford 123 definitely has a higher hit-rate than Series 1, and this episode, in which Aulus' wife Marcella pays him a visit, is pretty good. It's funny - I laughed - and even better, it's actually based on aspects of the ancient world.

The episode is book-ended by gods. It opens with a very funny sequence set on Mount Olympus, in which Jupiter makes fun of Paul Daniels (whom I used to like a lot, but in my defense I was very young at the time) and we see that Venus, much like Eleanor of Tsort, has seen better days. The sequence pays off at the very end, in which the writers get Aulus and Badvok out of trouble using a deus ex machina, in the best known tradition of Greek theatre - Vulcan strikes Aulus' irritating wife down with a lightening bolt he wanted to throw. The deus ex machina plot device has a rather bad reputation in modern drama as a cop-out (much like the 'it was all a dream' ploy used in the previous episode) but by introducing the story from the gods' point of view at the beginning, in this episode the writers are able to both use the Greek dramatic tool and make it seem like it comes less out of the blue, making it more acceptable to modern audiences.

The script also takes in several other genuinely Roman issues. Grasientus and Marcella's father has been dismembered in the emperor's latest purge, and although Hadrian was not particularly known for purges - Tiberius was the purger extraordinaire - it's a genuinely Roman problem. Similarly, Aulus is trapped in what was presumably a political marriage to a woman he can't stand. Divorce was easy in Rome, but not if you still needed whatever political or financial gain you'd wanted from the marriage in the first place. The idea of the ring that gives the wearer power is perhaps less likely, as I don't think Romans would have been more likely than most of us to believe that, but it's not impossible in a Roman context, in which some people at least could be pretty superstitious.

This episode also remembers, for the first time since the opening episode, that Aulus is not, in fact, speaking in his own language, and he makes the odd mistake with English. This is mostly to facilitate a joke involving a duck but it's a nice reminder. Aulus pretends to be mad to try to drive his wife away, and although his madness is not quite as funny as Blackadder's in Blackadder Goes Forth, it's pretty good and culminates in first a nice ancient reference (he thinks he's Neptune, which is neatly reminiscent of the really-mad Caligula's war against that god) and then pure surreal genius, as Aulus reveals a remarkable talent for speaking backwards.

Unlike many episodes of Chelmsford 123, this story is actually about making fun of ancient ideas and customs, not modern British ones. There's even a postman in it who escapes without any jokes about getting bitten by dogs or the unreliability of second-class mail. As such, apart from the Paul Daniels joke at the beginning, it's aged pretty well and can still raise a good laugh. Even Blag is less annoying than usual!