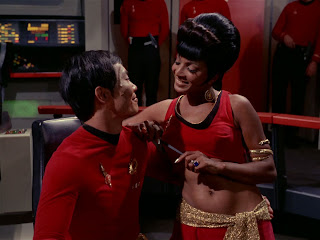 I totally forgot to mention this on the blog the other week, but this seems an appropriate place to do so - I've started reviewing Star Trek Voyager over at Billie Doux and will be slowly working my way through the whole show in order. You can see all the reviews completed so far at the index page here.

'Mirror, Mirror' is the very first Star Trek Mirror Universe episode (the first to be made, that is - the Enterprise two-parter is first according to internal chronology). I'm sure it wasn't the first example of a parallel universe in science fiction, but it's certainly a very influential one. If nothing else, it codified the trope of the Evil Goatee.

The variety of parallel universe shown here is one where some particular quality of our universe is reversed in the parallel universe, hence it's a 'mirror'. I believe the Enterprise episodes established a point of convergence for the mirror universe, which would make it a slightly different variety of parallel universe, one where everything was the same up to a certain point. Essentially, the difference is the same as that between Red Dwarf's original Ace Rimmer's universe, which was the same as ours until a specific thing changed, and Red Dwarf's parallel universe, where human counterparts are female and the Cat's counterpart is a dog. Except the Red Dwarf analogy falls down if you investigate too closely (what about the other counterparts in Ace Rimmer's universe? And so on). But you get my drift. The point is, in the Mirror Universe as depicted in this episode, everyone is in broadly the same personal situation, but something about them is completely different, and indeed opposite to their 'normal' selves.

In the case of the Star Trek Mirror Universe, the essential opposition is that in the Mirror Universe, everyone is evil. Granted, this is an over-generalisation. Mirror Spock is clearly ruthlessly logical rather than evil and when Deep Space Nine revisited the Mirror Universe, it was clear that not everyone there was straightforwardly evil either. But the essential idea behind the episode, the thing that the writers sat down and thought 'wouldn't this be cool' is that all our noble, upstanding heroes are, in the Mirror Universe, evil, conniving, violent thugs. Similarly, the great and beneficent Federation (which Star Trek still hardly ever questions or suggests has any negative qualities, and they certainly didn't back in the 60s) has an evil opposite for which all these evil crew-members work - the Empire. 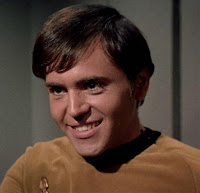 I am Evil. Check out my Evil Grin!

You can see where the Classical connection comes in. This is an Evil Empire, and we all know the prototype for Evil Empires - Ancient Rome. Throughout the 50s and 60s, Ancient Rome (with British accents, just to throw another dodgy empire into the mix) had been used on film to stand metaphorically for Hitler's Germany, Mussolini's Italy and the USSR (sometimes all at once). It's only natural that when science fiction came to create fictional Evil Empires, writers would turn to the same sources for inspiration. Star Wars manages to combine Nazis with Romans into one inglorious whole, but the Evil Empire here is, generally speaking, more straightforwardly Roman (as opposed to the Romulan Empire, which is a blend of the top three; Romans, Nazis and the USSR).

And so we get the usual, mostly surface-level, nods to Ancient Rome scattered throughout. The salute used all through the episode is the salute given to Romans in the 50s and 60s epics, which was used there because it looked a bit like the Nazi salute, which Hitler chose because he admired the Romans... hmm, I think I got lost in a cycle of causality there. The leader of the Evil Empire still goes by 'Caesar' (as have so many real life world leaders of course, evil or otherwise). Evil Kirk offs his enemies using a 'Tantalus device', named for the character in Greek myth who could see what he wanted but not touch it - Evil Kirk, on the other hand, gets what he wants without touching anything, as the device obliterates people from a safe distance. The whole thing is finally ironically undercut by our Spock referring to the whole Evil Gang as 'barbarians' at the end, at which I'm sure the Romans would feel most insulted, though 50s and 60s filmmakers would applaud. 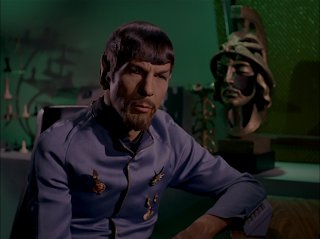 Oh yes, Evil Spock also has this exciting pseudo-Classical head in his quarters.

It's interesting to see what is considered 'evil' in this episode. The Mirror Universe episodes have an unfortunate tendency to associate evil with sex and sex with evil, much like films set in the Roman Empire, whose obsession with orgies is well known. It's fun to see everyone getting more action than usual (well, Kirk getting the same amount as usual) but the message is a bit worrying. Still, it's not so bad in this episode. Uhura reveals more skin, which is relatively harmless. Evil Sulu makes repeated attempts to assault her, which is definitely and unproblematically evil, but he's Evil Sulu, so I guess that fits, uncomfortable as it is to watch (though not nearly as bad as Bad Kirk's assault on Janice Rand in Season 1's 'The Enemy Within'). Deep Space Nine and Buffy the Vampire Slayer's occasional association of bisexuality with evil characters is more problematic than what we see here.

Otherwise, being evil mostly comes down to killing your way to the top by assassination, using torture as a punishment, grinning evilly and wearing shiny sashes. Ways to tell if a person is evil include scars (because of all the extra killing, presumably), skimpy outfits and, of course, the goatee. Although Spock turns out to be just Spock in the end, there is a wonderfully chilling moment where he threatens someone with torture by Vulcans and implies that Vulcans are especially nasty. I'd love to know what it is they do exactly that's so awful. Actually, maybe I don't really want to know...

This is a classic episode of Star Trek (pun intended) and a must-see for any science fiction fan, for the sheer level of its influence. The Mirror Universe is a really fun, if slightly silly, concept. It's also another in a long list of episodes inspired by Classical culture and by the epic films of the 50s and 60s. I'm not sure this is how the Romans wanted to be remembered, but being considered the ultimate metaphorical representation of evil government is one way to ensure you don't get forgotten I suppose, so maybe they wouldn't mind too much.