Brother and I went to see this at the weekend, and I'd highly recommend it. I've had a fondness for Ben Affleck ever since Shakespeare in Love, even through the J-Lo years (if you doubt me, just consider my opinion of Keanu Reeves and Star Trek Voyager...) and I'd heard that he was a very good director, but his other films (Gone Baby Gone and The Town) aren't really my thing (they looked a bit depressing!). So I was very keen to see Argo, a drama-with-a-bit-of-comedy-in-it-but-not-that-much-really about a CIA agent pretending to make a bad science fiction movie in order to get six Americans out of Iran in 1980. It's very good, and benefits from the real life events it's based on being relatively little known/remembered (obviously, I hadn't been born, but it hasn't rung many bells with people who were alive that I've talked to, though obviously they remember the taking of the American Embassy that kick-started the whole thing).

My excuse for blogging it, other than to say 'go see it,' is that there are a handful of references to the ancient world scattered throughout the first part of the film - most prominently, the title. Argo is the title of the bad science fiction film agent Tony Mendez is pretending to make. During a read-through of the script (a 'real' script that had been rejected, that composite character Lester Siegal buys to make the fake movie look real), one of the actors/various Hollywood people quizzes Siegal about the movie's title, only for Siegal to eventually exclaim, exasperated, 'Argo f*** off.' The random Hollywood person is probably right though, or nearly - he insists the title must be a reference to 'the Argonaut,' but he means the Argo (the Argo is the ship, an Argonaut is one of the sailors on the Argo). The Argo is, of course, Jason's ship in the story of Jason and the Argonauts. Science fiction, as long term readers of this blog will be well aware, frequently draws on the Classical world and on Greek mythology in particular so it's no surprise that a science fiction film would draw on the myth of the Argo in this way (though Wikipedia informs me that the real film was re-named Argo by the CIA, having been originally Lord of Light. It sounds spectacular. Someone should make it).

The choice of Argo for the title of this film as well is an interesting one. On one level, it draws on the mythology the same way the fictional science fiction film is presumed to - it gives the story epic overtones and a suggestion of adventure by linking it with an ancient quest story full of magic and exotic characters. But it also sounds, in English, just a little bit like another famous ship, the Ark. The subliminal suggestion of a lifeboat rescuing people from a great disaster is perfect for the film.

Other references to the ancient world are briefer, but the first line in the film refers to ancient Iran - the Persian Empire - which is a really nice beginning, as it evokes Iran's long, fascinating history before catching up to more recent events. There's also a brief exchange where John Goodman's John Chambers suggests using a script called The Horses of Achilles and Siegal declares that if it's got horses in it, it's a Western, and no one makes Westerns any more. It's very funny (Chambers does try to explain about ancient Troy) but also true in its own way - the tradition of the Western does feed into certain other genres of film, especially where horses are involved (or even camels, in The Mummy's case), and as Tony Keen has suggested, several films about Roman Britain draw on the genre of the Western in their representations of Roman-period Scotland.

As an historian, I feel duty-bound to point out that the film is far from historically accurate, but as an historian whose knowledge of the area in question is two thousand years out of date, I am spectacularly unqualified to do so myself. Assuming Wikipedia is halfway accurate, I think my fellow Brits (and New Zealanders) may have been insulted, though out of the need to create drama rather than any malicious intent. Overall, for those of us who don't know anything about the history of the region pre-the early 1990s, the film may, possibly, do more good than harm (though I assume this depends partly on your political persuasion).

As a film and a piece of drama, this is well worth seeing. Affleck really is a very good director (check out subliminal touches like the poster for New York showing an image of the financial district of downtown Manhattan in 1979 that the hostages in the embassy are rushed past during the storming of the building). He earned my eternal affection in particular with a couple of sequences that demonstrate a love and understanding of science fiction as a genre. The first was the scene in which the read-through of Argo which was intercut with news footage from the crisis in the Middle East; on one level, it shows up how ridiculous the film is, but is also emphasises what science fiction tries to do, which is represent feelings and struggles and emotions that are very real through metaphorical stories. But even better was the sequence towards the end which lovingly panned over Mendez' son's action figures (mostly from Star Wars, plus a Mr Spock). To a degree, science fiction saved these people's lives, and the shot plays like a rather sweet little thank-you to the genre. 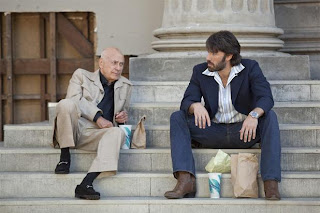 Argo isn't a perfect film, but it is very good and well worth a look. Plus, the very, very bad film-within-a-film looks so bad it could be brilliant - the campaign to get it made starts here!