The Roman Mysteries: The Thieves of Ostia 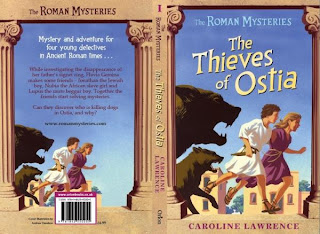 Spoiler warning! There are spoilers ahead. I haven't given away who dunnit or anything, but still.

The Thieves of Ostia is the first Roman Mysteries novel, and its main purpose is to get everyone together and set the scene for the cataclysmic events of the second, The Secrets of Vesuvius. As such, you might be anticipating a small, quiet case to establish our heroes' characters and their world and ease us in. In a sense, this is indeed what you get, as the mystery here is a local problem restricted to a small part of Ostia, and does not relate to possibly-dead emperors or national disasters, widespread criminal organisations or royal noses.

However, this does not mean that the book is lighter or less dramatic than any of the other Roman Mysteries. This story contains attack by wild dogs, dead children, home invasion, mutilated animals, suicide and, probably most distressingly to children, murdered family pets. I'm a cat person rather than a dog person so was fine with this story, but I've been known to abandon books that were too mean to cats in the past, so dog lovers, be warned! (Not that any of the descriptions are too gruesome of course. The book that upset me so much was an Iain Banks book - and, I believe, a Raymond E Feist book - both were much more horrible than anything here). The fact that the mystery is much more personal and the threat so immediate actually makes it scarier, I think. Whole towns being destroyed (particularly by an act of nature) is much less frightening than a threat to a child hero's home or pet.

Our four heroes are introduced gradually and stamp their personalities out clearly - especially Flavia and Jonathan, since the other two haven't yet learned to communicate fluently. Lupus' actions speak louder than words and give him perhaps the most fully-developed character so far, though we get to know him much later in the story - most of the book is carried by Flavia and Flavia and Jonathan are more readily identifiable for children. Nubia's main traits are already present, particularly her love of music and animal-whispering abilities, but she's hindered by her language difficulties.

Although it makes her rather more mysterious as a character, Nubia's struggle to learn Latin is probably one of the most fruitful results of the ancient Roman setting. Many children now come to school with little or no knowledge of the language spoken there; I don't know if there are many stories dealing with such problems in a realistic setting, but in adventure stories, this problem is rarely addressed. In fantasy, in particular, entire magical worlds often seem to have only one language spoken. It's really nice to see an exciting story engaging with the problems faced by children struggling to communicate (a problem also faced by Lupus, of course, as he doesn't have his wax tablet yet). Hopefully this gives children who've faced similar experiences themselves a heroine to identify with.

The main adult to make an impression here, besides sleepy Caudex the door slave, is Mordecai. Jonathan's father is the perfect voice of reason and calm, though he also gets his action moment. I was reminded of Atticus Finch in To Kill a Mockingbird as the mild-mannered doctor shot arrows at a pack of wild dogs - and although Mordecai doesn't turn out to be quite as good a shot as Atticus, he makes up for it in swordsmanship. Mordecai's medical expertise makes him an especially reassuring presence, and the tension is greater by comparison when he's not around - an ideal benign adult figure for a children's adventure story.

It's hard to view this book as a stand-alone volume when you've read most of the rest of the series, but even allowing for that, there's a clear sequel hook at the end. Captain Geminus sends his children off to Pompeii where he believes they will be safer - and only the youngest children will be unaware that this may not turn out to be his best plan! But that isn't meant to imply that this book isn't a satisfying read in itself, as it certainly is. (It even finishes with a little homage to classic Scooby-Doo, the villain all but claiming that he would have got away with it if it weren't for those pesky kids). The Thieves of Ostia is the Roman Mysteries equivalent of the origin movie, and as everyone knows, origin movies are great fun and intriguing in themselves, even if the makers have put the most highly anticipated adventures in their back pocket for the sequel.