The Roman Mysteries: The Secrets of Vesuvius 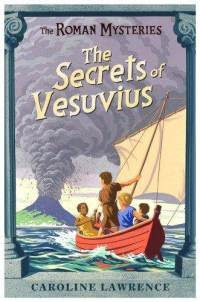 It's Volcano Day - Vesuvius erupts while our heroes are staying nearby at Uncle Gaius' farm in an exciting if sad installment of The Roman Mysteries. Spoilers follow for this book and for The Assassins of Rome.

When a volcano erupts and kills thousands of people, you have to include some death, even in a children's novel; but at the same time, you don't want to drift too much into tragedy (hence Doctor Who saves the named characters, the family the audience care about, making up for the Cambridge Latin Course being less kind!). The Secrets of Vesuvius strikes a very nice balance by killing off only one named character that we care about, and that one is Pliny the Elder, a real person who actually died during the eruption of Vesuvius. At the end of the book, it looks like Lupus' girlfriend Clio and most of her family have also been killed, but this is not certain, and in The Assassins of Rome, it turns out that they escaped, which I think is a good thing (especially as Clio had already had a miraculous escape/faith healing in this book, and it would seem a waste to kill her off almost immediately afterwards).

The death of Pliny keeps the book grounded and acknowledges the real life tragedy without being too traumatic for sensitive child-readers (I am always thinking of this because I was ridiculously over-sensitive as a child. Seriously, I used to cry through every Friday assembly and bury my head on my best friend's shoulder because I was upset by our headmaster's tales of survival against the odds. And those stories always had happy endings! For some reason I still loved A Tale of Two Cities though. And A Night to Remember...). If any children are upset, it can gently be explained to them that this really happened and Pliny really died (i.e. there's not a lot anyone can do about it!).

The book's description of Pliny's death follows Pliny the Younger's account exactly, and the characterisation of Pliny is beautifully done and very funny ('It does appear to be getting a little worse,' he says as the earth quakes, ash and pumice rain down on them and Vesuvius prepares to cover all of Pompeii and Herculaneum with a pyroclastic flow). The book states outright that Pliny had asthma, which is how I've always interpreted Pliny the Younger's reference to his uncle's chest complaint as well. Pliny the Elder is one of my favourite ancient authors so although it's sad to read about his death, it's nice to see him appear and get a moment in the limelight.

The story is carefully constructed to follow each stage of the eruption as closely as possible, Lupus travelling all over the Bay of Naples while the others watch from Stabiae. The Author's Note at the back mentions that there is some debate over the precise sequence of events, but the story follows a probable scenario and fits with the best evidence we have, Pliny the Younger's description. There are several exciting sequences and the story gets into the heads of Roman children who have no idea what's going on very effectively.

There are other subplots in this story - the children don't know that a volcano is about to erupt, and spend the first two thirds of the novel pursuing mysteries as usual. The central mystery features an appropriately named blacksmith called Vulcan, which is quite fun, and the solution plays an important role in everyone's movements during the eruption, so the novel hangs together properly - it doesn't just stop the mystery story to pay attention to the volcano, but makes the eruption and everyone's reaction to it part of solving the mystery. Flavia also solves a riddle in Latin - it might be a bit frustrating for young readers to be unable to solve the riddle themselves, but hopefully it might encourage them to learn some Latin! Really, though, all other plots fade into the background in comparison with the eruption of the volcano, which is the big climax both this story and, to an extent, The Thieves of Ostia as well have been leading up to. 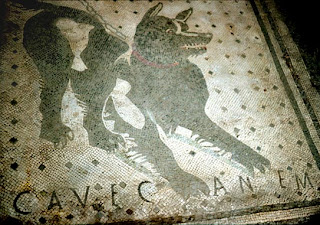 Dog lovers should be warned that there is more violence to dogs here! Luckily Ferox still appears to be alive at the end of the story. Ferox, Uncle Gaius' ferocious guard dog, must have been inspired by the famous mosaic from the House of the Tragic Poet in Pompeii that shows a fiercesome black dog and says 'Cave Canem,' 'Beware of the Dog.' It's a really nice touch and I have a very clear mental picture of Ferox!

I've always been fascinated by the AD 79 eruption of Vesuvius, and hopefully children who read this book will be too. Although our heroes can't possibly understand pyroclastic flow (or get caught in it, as that leads to certain death) the eruption is described as clearly as possible and culminates in poor Pliny's real death, and may, hopefully, get children interested in finding out more, geologically or historically!