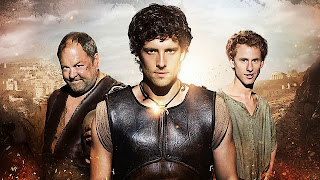 Atlantis is BBC One's new Saturday night teatime family show, replacing Merlin, which finished last year. That means it's a light, PG-rated show with minimal blood and sex - though it does feature male nudity (albeit shot from the waist up) within the first five minutes, so make of that what you will. (Why was our hero washed up on the beach without clothes, but with his special necklace? Enquiring minds want to know).

Atlantis follows the adventures of Jason, a remarkably young marine salvage worker of some kind (is he a marine archaeologist? That would be a handy career for him, as it would imply some knowledge of ancient archaeology...). While looking for the submarine in which his father apparently drowned, Jason is pulled into a white light and washes up on the shores of Atlantis, which he is later informed is another world. Presumably the mechanics of the thing, specifically whether or not he's also gone back in time, will be revealed at some point. What we know so far is that this world is inhabited by a host of characters from Greek mythology, in a typical All Myths Are True format, plus one very real person, philosopher and mathematician Pythagoras.

Assuming Pythagoras is our Pythagoras - and his obsession with triangles would seem to indicate that's very much the case - Jason must be either back in time, or in a world that might spit you out into any era of ours. Or something. Anyway, it turns out he was born there, and there's some big mystery surrounding his birth and the identity of his parents, both of whom are supposedly dead (I fully expect both to turn up sooner or later, especially his father, who apparently 'walks among the dead' - very much not the same thing as being dead).

Mythologically speaking, Jason (of the Argonauts)'s parents were King Aeson and a human woman whose identity is of such little importance that it varies among different accounts, but presumably Atlantis is going for something different here. The Atlantis Jason finds is ruled by a king, but this king has been transposed from a different area of Greek mythology - Minos and Pasiphae were legendary king and queen of Crete. Presumably, as the series goes on, we'll see lots of different bits and pieces of Greek mythology from all over the place incorporated into it, but for this first episode, the writers stick with their decision to go with Minos and draw on mythology relating to Crete - specifically, the well-known story of the Minotaur.

In myth, the Minotaur was the son of the queen, Pasiphae, and a bull she'd fallen in love with. Bestiality being a bit risque for Saturday night family viewing, here he's a man who's been cursed, and he only kills seven adults every year, not fourteen children. The idea of the curse works rather well - Greek mythology is full of cursed people metamorphosing into an array of animals and/or monsters, usually as the result of claiming to be better than the gods (I say 'Greek mythology' but really I mean 'Ovid' - his Metamorphoses is full of these stories). It also makes the Minotaur's end rather more poignant than a basic monster-slaying, not to mention it enables him to spout exposition at our hero as he dies.

The reason the sacrificed people are adults rather than children is that Pythagoras is chosen by lot as one of them - they're referred to a couple of times as tributes, presumably in reference to The Hunger Games. This episode spends most of its time introducing the show's three leads, Jason, Pythagoras and Hercules. Of the three, Hercules has the potential to be the most interesting. I love the show's reinterpretation of Hercules as a slightly overweight coward who's a bit too fond of a drink, though he was persuaded to at least try to rescue Jason from the monster and I'm sure he'll kill something at some point, even if accidentally. Seeing Greece's greatest hero as a man who's all talk but not much good in a fight is a nice twist.

Jason's own position as a modern character - or at least, a character raised in the modern world - is very useful for exposition, as he will be able to recognise the various famous names and immediately understand something about new situations (though he doesn't blink at the name 'Helena' - only time will tell if this is the Helen...). We also get the usual humourous time travel references (telling Pythagoras he's destined to bore schoolchildren in maths lessons for hundreds of years, for example). So far, though, the best use of his out of time status has been his reaction to Hercules throwing a sword at him - he waves it around for a few seconds and is quickly disarmed.I love that, presumably having never held one before, he isn't magically able to use a sword straight away (at least he caught it).

Jason's love interest on the show is the princess Ariadne, who here holds the honour of being the only person in the script - other than Pythagoras and his triangles - who actually does what we expect of her, mythologically speaking. She gives Jason the thread which he can use to find his way out of the Labyrinth (which disappointingly, is a series of caves rather than a maze). She tells him it's been enchanted by the witches of Colchis which was a really nice touch and my favourite mythological reference of the episode - quite apart from explaining why this thread is special and no one has thought of this before, in Greek mythology, the witch of Colchis is Medea, the woman Jason marries and leaves for a younger model, prompting her to murder their children in retribution. I'm hoping she'll turn up sometime, perhaps in season 2 if the show gets that far...

The other significant character introduced here is the Oracle. (A bit of submarine or something labelled 'the oracle' that Jason sees on his way down did briefly make me wonder what language these people are speaking and whether the writing should all be in ancient Greek, but it's probably best not to think about that too much). Juliet Stevenson is suitably other-wordly, though these scenes bear little resemblance to real oracles. You could never consult a real oracle without paying, and the supplicant or the priest sacrificed an animal - usually a sheep or goat - before the visit, not the Oracle herself. Oracles of the human kind would usually speak gibberish interpreted by the priests rather than addressing people directly, as well. None of which really matters, given that her first job is to explain firmly that this is another world, not our ancient Greece, but still. 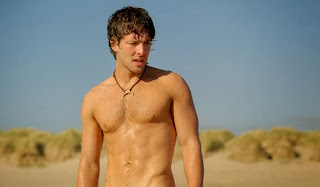 It may not be Game of Thrones, but this is a lot more nudity than we ever got in teatime dramas when I was little...

All in all, this did what first episodes need to do efficiently and with some nice bits of humour. The show looks gorgeous, making full use of some Moroccan filming (though the CGI on the Minotaur perhaps doesn't quite hold up). Jason's a likable enough lead and the mystery surrounding his background provides a thread to follow through to, presumably, the end of the first series at least. It's hard to tell from a first episode what Atlantis will eventually become, but it should be an entertaining enough - and very pretty - journey to find out.