The Roman Mysteries: The Enemies of Jupiter 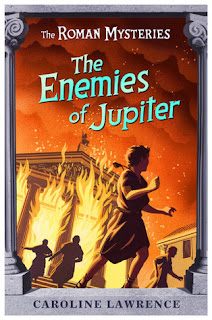 The Enemies of Jupiter is the last of the Roman Mysteries I needed to read. I've been putting it off because I was worried it would be depressing, which was silly, because this story is all about dreams and ancient medicine, so it's perfect for me!

Of all the Roman Mysteries, this is probably the closest to fantasy as a genre. Major plot developments are kicked off by dreams and there are genuine prophetic dreams in the story. In addition to the dreams, there's one other touch of fantasy in here - the Ark of the Covenant makes an appearance! Obviously, this being historical fiction, there are no melting Nazis, but the description of the box treads careful line between offering historical plausibility - it's situated in a pool of light, carefully placed in a richly adorned room - and suggesting that just maybe the thing glows all by itself. Since everyone is too scared to open or even touch it, the possibility remains that had they done so they would have melted, and that it will eventually be discovered by a fedora-wearing, whip-wielding archaeology professor and melt some Nazis. You never know.

There are loads of different types of dream here, reflecting the different types of dream featured in ancient literature (as categorized in an excellent albeit slightly pricey book on the subject! ;) ). Titus' dream is a classic prophetic dream, and all the dreamer's attempts to prevent it coming true actually ensure that it does come true. Judging from Suetonius, Titus wasn't particularly superstitious but did consult horoscopes etc., so giving him a prophetic dream and having him pay attention to it as a warning from the gods fits him well enough.

Later in the story, Nubia has both straightforward anxiety/trauma dreams, and more apparently significant ones. She dreams that the slave-dealer Venalicius is alive again - although ancient authors often acknowledge the existence of meaningless anxiety dreams, Flavia takes the equally well attested ancient approach of dismissing this as a false dream, mentioning the gates of horn (true dreams) and ivory (false dreams) described in the Aeneid (and the Odyssey). Nubia's fever dream in which she senses that Jonathan is in danger is a less common ancient type of dream, though occasional stories of people being linked through dreams and one dreaming of something happening to the other crop up in many different periods and places.

One of my favourite parts of the book was the children's investigation of the doctors treating the plague. The 'plague' is written as some kind of flu epidemic, not unlike the 1918 Spanish flu. This makes sense - in the ancient world, 'plague' meant a disease that spread quickly and hit epidemic proportions, not a specific disease like bubonic plague. Our heroes meet four very different types of doctor - one who wants to bleed everyone, one who recommends 'fasting, abstinence, walking, rocking and massage,' one who swears by diet restrictions and drinking urine and Jonathan's father Dr Mordecai, who recommends steam, broth and rest. Since this is a children's book, of course, Dr Mordecai's advice is the best as young readers need to see our favourite characters doing the right thing, though only the bleeder is really a liability. This is a great reflection of the realities of medicine in a world where no one is quite sure what's really best, where no one person has all the answers, and where everyone is just muddling through, doing the best they can. Ancient medicine was often about taking one step forward and two steps back, and this exemplifies that perfectly.

The narrative emphasises throughout that sick people in the ancient world did not choose either to pray and sacrifice to the gods or to take the advice of doctors - they did both. In fact, Suetonius specifically mentions that Titus did both during the plague. Too often, modern stories imply that foolish ancient people might rely on priests while more sensible ones consulted doctors, which is a basic misunderstanding of how religion in general works most of the time. You don't choose whether to pray or listen to a doctor - you do what the doctor says, and you pray. It's great to see that represented in fiction.

There were other bits and pieces I enjoyed a lot here, too. I love the idea of 'open a Pandora's box' being the ancient equivalent of 'open a can of worms' - I can't remember if that comes from an ancient text or not, but I like it. And there was a brief scene set at the Lupercalia! This is the festival in which aristocratic men ran naked through Rome in February, which I am always disappointed to see left out of productions of Shakespeare's Julius Caesar.

There are some lovely touches scattered throughout the book. As the fire spreads, Jonathan sees a young man carrying an old man on his back, echoing the story of Aeneas carrying his father Anchises out of Troy. Even more subtly, at one point that group stand next to a 'statue of a Trojan and his sons being devoured by sea serpents.' That would be a Roman copy of the Laocoon, or something like it - a Hellenistic Greek statue that doesn't survive (but a Roman copy does) of Laocoon, who tried to warn the Trojans not to take the horse into Troy. He and his sons were killed by snakes, because the gods had decided Troy had to fall. Similarly, Titus experiences a (god-sent?) dream which partly prompts him to send for the children (along with Jonathan's letter), and in doing so he invited the Trojan horse - Jonathan - into the city. 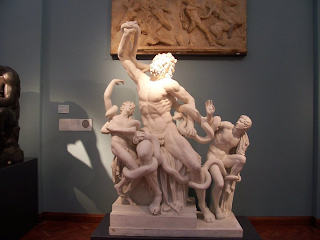 Plaster cast in the Ashmolean Museum, Oxford, of the Roman marble copy (now in the Vatican Museum) of the bronze original of the Laocoon. So this is a plaster copy of a marble copy of a bronze statue.

All in all, this wasn't quite as depressing as I'd feared. Jonathan's attempt to Parent Trap his parents actually works unusually well - but Jonathan lives in a much more dangerous world than the children in more usual Parent Trap-type stories, and the unintended consequences of his actions are much more drastic than would be possible for most - though you suspect it would have happened without his intervention anyway. And it's all a perfect lead-in to my absolute favourite of the Roman Mysteries - The Gladiators from Capua!