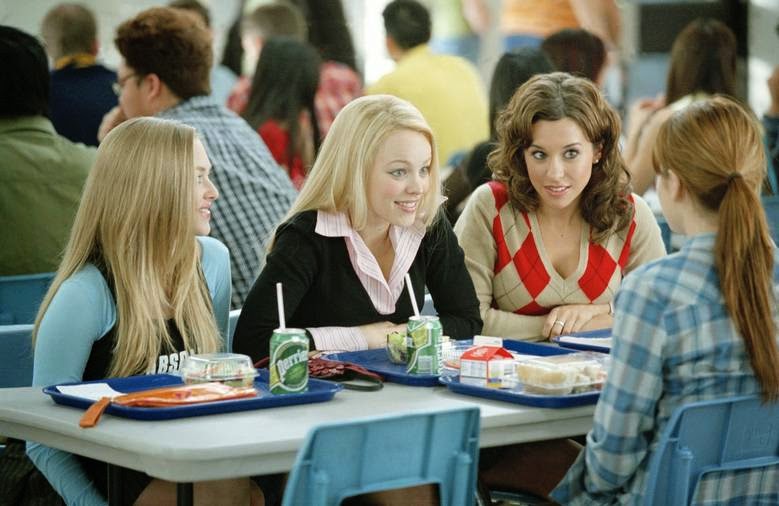 I finally got around to watching Mean Girls this week, when one of my lovely best friends lent it to me. I'm pretty sure I knew almost the first third of the movie line by line already just from internet memes - having now seen both this and Anchorman, I feel I understand about 75% more of Tumblr.

I have conflicted feelings about high school films. Not only did I not attend an American high school, for obvious reasons, the British high schools (we moved) that I attended were seriously weird and are never represented in popular culture. See, not only did I not go to a normal co-ed comprehensive, I didn't go to a fancy private school either. I went to (two different) all-girls grammar schools, a type of school that only exists in a few counties in the UK (had we stayed in Suffolk I'd have gone somewhere much more normal). We got all the emotional stunting of an education without boys with none of the privileges of wealth - since the second one was in Rugby (which also contains one of the poshest schools in the country) we spent our entire time in the shadow of the rich kids telling people 'no, not that one, Rugby High School. It's a very different thing'.

The point is, I don't know the first thing about normal high schools, especially not American ones. But it does seem that everywhere you go, at whatever age, people tend to form into cliques, and sometimes those cliques have leaders, and sometimes it all descends into horrifying levels of back-stabbing and meanness. Which is why I especially enjoyed this brief outburst from the middle of the movie. Mean girl Gretchen has been insulted by queen bee Regina (I didn't say the symbolism was subtle) and finally cracks while studying Shakespeare's Julius Caesar in English class:

Gretchen: Why should Caesar just get to stomp around like a giant while the rest of us try not to get smushed under his big feet? Brutus is just as cute as Caesar, right? Brutus is just as smart as Caesar, people totally like Brutus just as much as they like Caesar, and when did it become okay for one person to be the boss of everybody because that's not what Rome is about! We should totally just STAB CAESAR!

It's something of a more on the nose, less poetic version of Cassius' famous speech from the play:

Cassius:
Why, man, he doth bestride the narrow world
Like a Colossus, and we petty men
Walk under his huge legs and peep about
To find ourselves dishonourable graves.
Men at some time are masters of their fates:
The fault, dear Brutus, is not in our stars,
But in ourselves, that we are underlings.
Brutus and Caesar: what should be in that 'Caesar'?
Why should that name be sounded more than yours?
Write them together, yours is as fair a name;
Sound them, it doth become the mouth as well;
Weigh them, it is as heavy; conjure with 'em,
Brutus will start a spirit as soon as Caesar.
Now, in the names of all the gods at once,
Upon what meat doth this our Caesar feed,
That he is grown so great? Age, thou art shamed!
Rome, thou hast lost the breed of noble bloods!

Of course, the reason Shakespeare has lasted so well, aside from the poetry, is that he boils complicated stories down to represent universal truths. As historians, we tend to view historical situations as rather more complex than that. But people are still people in the end, so with it being the Ides of March tomorrow, I am choosing to be amused by the mental image of Caesar, Brutus, Cassius and the rest as catty American high school girls who wear pink on Wednesdays. It might be closer to the truth than we think.