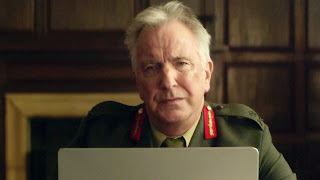 Greek tragedy often sets a up a moral problem in which the interests of the oikos - the household, i.e. the family and family unit - are at odds with the interests of the polis - the city, i.e. the political state. In some cases, we as a modern audience can understand the dilemma - surely Antigone, for example, should be allowed to bury her traitor brother? And yet, we understand that Creon is tenuously holding on to hard-won power and nervous of any sign of frailty.

In other cases, however, we might find it difficult to see the choice as a real choice. When the goddess Artemis demands that Agamemnon sacrifice his young daughter, Iphigenia, so that the Greek army can get the right winds to sail for Troy (for an aggressive attack supposedly intended to retrieve his sister-in-law), it can be hard for a modern audience to sympathise. How could we ever consider killing a young girl in the hope of gaining a better wind?

At least since the publication of Jonathan Shay's excellent Achilles in Vietnam if not before, though, a number of scholars have been working on interpretations of Greek myth as stories which allowed the Greeks to deal with real traumas in a metaphorical way, much like the best science fiction and fantasy does in the modern world. A myth about a hero who is driven mad by a goddess and attacks his family, for example, may be an expression of very real incidences of post-traumatic stress disorder experienced, though of course not diagnosed, by returning Greek soldiers. In myth, the gods are the cause of the trouble, but these divine figures may be metaphors for more human causes.

The sacrifice of Iphigenia does not bear any particular relation to post-traumatic stress disorder, but it may reflect real experiences of Greek soldiers and the agonising decisions they have to make. We see almost the same decision, minus the personal connection, play out in Gavin Hood's excellent Eye in the Sky (which is also Alan Rickman's final on-screen performance, and a fitting swan song for a great actor). In this film, British and American forces face a dilemma - they have a chance to kill a group of dangerous terrorists, but doing so will almost certainly kill or severely maim an innocent little girl. What should they do?

Of course, in ancient Greece, drone warfare did not exist and this exact dilemma could not have happened. But enemy camps would not necessarily have been devoid of women and children, even in the ancient world. Camp followers would have been present, and some of them may have had children. Officers also sometimes brought their wives and children with them - in the Roman period, a group of mutineers were famously pacified when they frightened away the two-year-old Caligula and his mother. It is not inconceivable that an attack that would provide a strong tactical advantage would also kill or harm innocent children, and of course, any attack tended to result in the enslavement of the women and children on the losing side.

Agamemnon's specific dilemma (killing his own daughter) is unlikely to have occurred, just as the specific set of circumstances depicted in Eye in the Sky, while plausible, is fairly unlikely. But both Iphigenia and Eye in the Sky's Alia stand for all the young girls and boys killed or maimed, directly or indirectly, in warfare. The decision-making process in reality may not be so calculated or so personal, but any military attack, especially if it is anywhere near a civilian habitation, may bring with it innocent casualties, and those in the military must weigh up impossible decisions concerning the rights and wrongs of any such attack, decisions the rest of us hope never to have to face. That was a dilemma that affected the ancient Greeks just as much as it affects the modern military, and the fates of Iphigenia and Alia are a reminder of the true weight of those decisions.