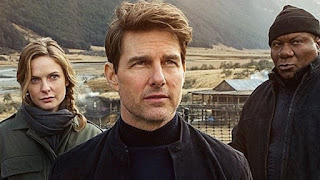 I've been listening to the Empire Podcast's extraordinary 3-part Spoiler Special on Mission: Impossible - Fallout, which features over 5 hours of in-depth interviews with writer and director Christopher McQuarrie on the making of the movie, plus a discussion of the film with Empire magazine's staff. It's a fascinating insight into the movie-making process and a must-listen for anyone with any interest at all in the art and the practicalities of film-making, so (as long as you've seen the film, or don't care about spoilers) I'd highly recommend heading over to listen to it. Part 1 is here. If I ever meet Chris McQuarrie, I'll have to thank him for taking so much time to explain how this process has worked for him and for being so enthusiastic about doing it!

During Part 2, Chris Hewitt, Helen O'Hara, Nick de Semlyen and James Dyer talk about the film's early scene set supposedly in Belfast (though, as Hewitt and O'Hara point out, it is clearly not Belfast as there is not a Tayto in sight), in which Tom Cruise's lead character Ethan Hunt is reading Homer's Odyssey. They talk briefly about how the Odyssey links to some of the themes of the film, but point out that the film's plot doesn't really resemble that of the Odyssey in any substantial way. I thought the choice of book was really interesting - and there's a lingering shot of it, so it's clearly meant to mean something - so here's my take on it.

There are a few over-riding themes in the Odyssey:
- A difficult journey, specifically by sea.
- Numerous adventures. However, please note that this bit occupies only three 'Books' (i.e. chapters) of a 24-Book poem, and there's a good chance Odysseus is making it all up to impress King Alcinous and his pretty daughter Nausicaa anyway.
- The homecomings of veterans returning from a long war (not limited to Odysseus himself).
- Marriage and the joy of coming home to a faithful wife (as opposed to an unfaithful wife whose lover murders you, like Agamemnon).
- Kingship and the importance of not letting the plebs take over your kingdom while you've been away for 20 years fighting someone else's war and then shagging a sea goddess. This part tends to get brushed aside by modern versions!

Safe to say, it's probably 'long and difficult journey' and 'homecoming of veterans' that McQuarrie and the film-makers are going for here!

As Team Empire point out, the plot of Fallout ends up going in rather the opposite direction to the Odyssey. Ethan is reunited with his wife, but she has left him and married someone else, and the film clearly implies that this is a good thing, that she is happy, and that Ethan should (as he has done) let her go. So why the Odyssey flag at the beginning of the film, if this Penelope has gone off and married one of the suitors?

I'd suggest that the Odyssey reference is implying the search for a home, including a partner of the desired gender (in this case a woman). OK, Ethan's Penelope has left, but there is another woman with him at the end of the film. Indeed, the reminder at the beginning of the film of Odysseus' desire to return to his wife plays into the scene near the end when Ilsa sees Ethan talking to Julia. She is concerned that, like Odysseus, Ethan will want to return to his lost love - but unlike Odysseus, Ethan is able to move on.

Both Rogue Nation and Fallout play with the idea that Ethan could, if he chose to, retire from his lifestyle full of dangerous adventures and create a more stable home with Ilsa, who is a veteran just like him, who shares his experiences and understands them in a way Julia never could, but who doesn't actually want to live that way. There is just a hint of a suggestion that perhaps, eventually, Ethan could finally come 'home', in the sense that he could create a home, instead of sleeping alone in a dark room with a sad lack of cheese and onion Taytos (the best flavour).


There is another inversion of the plot of the Odyssey in this film as well. Odysseus famously manages to lose his entire crew over the course of his voyage, largely due to their own stupidity and inability to follow simple instructions. Ethan Hunt, on the other hand, is motivated throughout the film by his desire not to lose any of his crew, and is criticised for caring too much about their lives instead of his mission. In this way, his reading of the Odyssey at the beginning of the film acts as a warning, and a reminder of how important it is to him to avoid Odysseus' fate in that respect. Both inversions are reminders of what could have been - a happy ending denied (possibly prompting him to look for a new one), and a tragedy avoided.