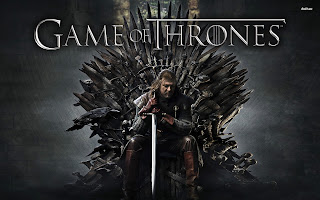 You can follow George RR Martin's saga of death, incest, death, zombies, death, dragons and more death in one of two forms. The original book series, A Song of Ice and Fire, consists of five books so far in hardback or seven in paperback, and is planned to run to seven volumes overall, chronicling the fight for the Iron Throne of Westeros, a long-drawn-out conflict that may or may not become completely irrelevant if and when the whole country is overrun by zombies. Alternatively, since the books are really quite long and contain many chapters about dull, unpleasant people in the Iron Islands, you can watch the HBO adaptation Game of Thrones (named for the first book, A Game of Thrones). Much as I love the books, the adaptation is most definitely slightly shorter, slightly funnier and slightly nicer. It is also completely awesome on just about every level. Plus, for inhabitants of a cold country, the unusually attractive people of Westeros are remarkably ready and willing to take their clothes off at the slightest provocation. However you choose to consume it, this is an unmissable series - make sure you catch up with it one way or another before someone tells you about That Thing That Happens in Part 3...

You can read my thoughts on That Thing That Happened in Season Three - but only if you've seen or read it, or you'll spoil yourself - here. I have also written on My Least Favourite Scene in the Whole Story and co-written a piece pulling together various fan theories, and I've produced a list of Totally Accurate* Predictions for who will live and die in A Song of Ice and Fire.

*May not be totally accurate.