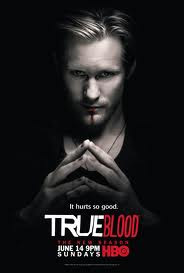 Just when you thought TV couldn't get any gorier or include any more ridiculous sex scenes than those in Spartacus: Blood and Sand, along comes True Blood to prove you wrong. Based on the Sookie Stackhouse novels, also known as the Southern Vampire Mysteries, by Charlaine Harris, both books and TV series include occasional bits of ancient culture thrown in amongst the evocatively drawn modern Southern setting.

It took me quite a while to get into this series, as my posts on the TV series demonstrate, but Season 3 got me utterly hooked and after that I raced through the books as if they were chocolate cake. They're silly, sexy, gory fun, and as the cherry on the cake, every now and then we get to meet a Roman vampire.

Books
2. Living Dead in Dallas
7. All Together Dead
10. Dead in the Family