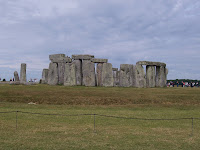 I was at Stonehenge this morning and discovered that there are big plans afoot to move all the roads that run near it so that it can be surrounded by green fields. I must admit, I’m not wild about this idea – I actually like seeing the modern and the ancient next to each other, and we can’t recreate the monument’s original setting, as it would have been surrounded by trees.

Anyway, this is what made me think about the use of ancient architecture to tell later-set stories. Ancient monuments can provide wonderful dramatic settings – in the 1978 film adaptation of Agatha Christie’s Death on the Nile, the apparently deranged Jackie stalks her former friend Linnet and former fiancée Simon on top of one of the pyramids at Giza and, complete with monstrous echo, at Abu Simbel. The ancient setting, and Jackie’s reciting of tourist information at her shocked friends, adds a sinister air to the whole thing, especially when Linnet and Simon stand, dwarfed by the enormous statues at Abu Simbel, with Jackie above them, looking down in satisfaction as they cower before her (see the video here).

Ancient ruins can also be sad and melancholy. In The Lord of the Rings, there are no real ancient ruins, but the story is full of relics of bygone eras from Tolkien’s mythology, such as this passage from The Two Towers.

‘The brief glow fell upon a huge sitting figure... The years had gnawed it and violent hands had maimed it. Its head was gone...
Suddenly, caught by the level beams, Frodo saw the old king’s head: it was lying rolled away by the roadside. ‘Look, Sam!’ he cried, startled into speech. ‘Look! The king has got a crown again!’
The eyes were hollow and the carven beard was broken, but about the high stern forehead there was a coronal of silver and gold. A trailing plant with flowers like small white stars had bound itself across the brows as if in reverence for the fallen king, and in the crevices of his stony hair yellow stonecrop gleamed.
‘They cannot conquer for ever!’ said Frodo. And then suddenly the brief glimpse was gone. The Sun dipped and vanished, and as if at the shuttering of a lamp, black night fell.’
The Two Towers, ‘Journey to the Crossroads’.

From the film of The Return of the King, moved from its place in the book. I think there is an Alan Lee illustration of this scene, but can't find it at the moment.
Tolkien’s imagined ruins add both melancholy and hope to the scene, and his characters find meaning for themselves in seeing the ancient remains. The 2001-2004 movie adaptations use similar imagery, setting Frodo and Boromir’s confrontation in The Fellowship of the Ring next to a giant fallen head of a statue and making much of the Company’s first sight of the Argonath, which also formed a big part of the advertising campaign for the first film.

The 2006 film version of Tristan and Isolde has the lovers meet in the ruins of a Roman villa. The ruined house increases the romantic atmosphere, because there is something inherently romantic about ruins. Maybe this idea is a relic of Victorian and Edwardian photographers who liked to set up photographs of their subjects lounging about ancient ruins, or maybe its all Byron’s fault. It’s hard to say. But there is something about a ruin that seems to scream ‘romance!’ across our collective consciousness. In this case, the romance is heightened by the idea that the villa belongs to a more ‘civilised’ era, and may have been a happy family home, in contrast to the dark, medieval misery Tristan and Isolde are living in. (Of course, the family who lived in the villa might have been utterly miserable and hated each other, but this is not the first thought that comes to mind).

Disney’s 1992 Aladdin also uses ancient ruins to romantic effect, in this case the Parthenon, which Aladdin and Jasmine fly around on the magic carpet. They also pass by the Sphinx at Giza, where an Egyptian workman is just finishing off the nose – and is so surprised to see two people fly past on a magic carpet that his hand slips and the tip of the nose falls off. In jokes like this are the most fun part of using ancient ruins, and of allowing outside characters to interact with the

architecture we already know.
Jasmine helpfully waves at the unfortunate Sphinx artist
(Aladdin and Jasmine, by the way, get all the way to China from the Middle East in an evening – I hope they have some kind of windshield for that carpet).
Many of these uses would not be possible in a modern-set story, depending on how much access one can get to ancient ruins. Obviously, I am in favour of preserving ancient ruins as much as possible, but I think it's a shame if this is done at the expense of allowing people to enjoy them, and allowing new stories to take place among the ruins of the old.
Archaeology Disney Egyptology Fantasy literature Films Lord of the Rings Sci-Fi and Fantasy