Monty Python and the Search for the Holy Grail 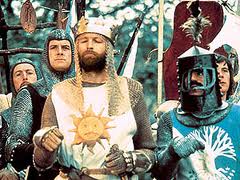 Since I keep quoting from this every time I mention the Trojan Horse, I thought I should give it its own post.

example, one theory says that the Indian aśvamedha ritual consisted of the sacrifice of a horse and may have been linked with the consolidation of a ruler, so the Trojan Horse might represent a horse sacrifice to achieve victory, resulting in the destruction of the enemy ruler. But all of this must be taken with a huge pinch of salt - there just isn't enough evidence to make any theory convincing.
And it all ends with Python's classic battle cry, beloved of all those of a practical bent - 'Run away! Run away!'