The West Wing: The Stackhouse Filibuster 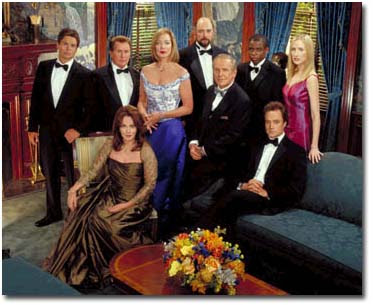 I've been researching the goddess Isis in the Greek and Roman worlds all day, and was reminded of this sequence from The West Wing. An Egyptian diplomat is going to visit and the President needs to display a gift - a statue of a cat, sacred to the goddess Bast - that he was given when he visited Egypt. Unfortunately, the statue was given to CJ, who has a problem...

C.J. Back to the cat story dad, I've done my research, and sure enough, I was quite screwed. I was in trouble, and I needed to tell someone, a cohort. Someone whose criminal mind is equal to my own.
CUT TO: INT. HALLWAY - DAY
C.J. catches up with Donna, who is carrying a bunch of files.
C.J. Donna, I need to talk to you right now.
DONNA I have to get these to people.
C.J. So, we went to Cairo last year.
DONNA Not me.
C.J. Right.
DONNA I had strep.
C.J. I didn't which is sad for me.
DONNA Are you in trouble?
C.J. I may be in a spot of trouble, yes.
DONNA What happened?
C.J. Hassan Ali gave the President a gift, a small ceramic statue of Bast.
DONNA Bast?
C.J. Bast. A cat goddess. She was...
STAFFER [holding a phone] Donna, did Josh leave?
DONNA He went to lunch.
C.J. She was the patron saint of Bubastis and rose to prominence during the period of the 22nd Dynasty.
DONNA How do you know all this?
C.J. I looked it up. The cats in the temple...
DONNA What temple?
C.J. The temple of Bubastis, maybe, I don't know. The cats in the temple wore jeweled collars. They were treated royally. They thought cats controlled the movement of the moon. They had total authority over royal houses because of their ability to see in the dark. Anyone who killed a cat was put to death.
DONNA I'm sorry, C.J. I'm not...
C.J. stops walking and so does Donna.
C.J. I broke the damn statue. Not badly, but you know, in several pieces. And since it came out of his own collection, breaking the figurine would amount to a personal affront implying he had bad taste, and that the object was of little personal value to the President.
STAFFER 2[walking by] Donna, they're asking for you back at your desk.
DONNA How did you break it?
C.J. The gift officer handed it to me. I tossed it in my suitcase.
DONNA You tossed it in your suitcase?
C.J. Do you have any idea how many pieces of crap gets stuck in the President's hands every time he leaves the building?
DONNA Didn't the gift officer know it was a priceless relic?
C.J. Well, apparently not, because she handed it to me with a couple of T-shirts and a box of baklava.
STAFFER 3 [OS]Donna!
DONNA Yeah. [to C.J.] Why are you telling me this?
C.J. I thought maybe you'd have an idea.
DONNA Well, there's nothing really I can think of right now, except agree that you're monumentally screwed. I mean I hate to leave it at that.
C.J. But you're gonna.
DONNA Yeah.

It eventually transpires that CJ had been using the statue as a pot pourri holder and had Crazy-Glued it back together after she broke it. Though she's still worried that she is now under the curse of Bast.
Bubastis is a town, by the way, not a person or deity, as CJ seems to imply.
This tiny C-story always makes me smile. It helps that it's from one of the best episodes of The West Wing, from the end of Season 2 when every episode seemed even better than the last one. It's also an important bit of light relief, with a nicely heart warming main storyline, before we really get into the ever darker story of Bartlett's concealment of his MS. Maybe its just because I like cats, but I find CJ's conviction that she's now under some kind of curse, coupled with her sheepish expression and Donna's unhelpful response, really funny.