Just a short one again, I'm afraid, as I am snowed under with work at the moment.

In my conference paper, I talked a fair bit about Prince Caspian, which features the most significant references to Greek myth in the Narnia series. I won't repeat that here, since I'm hoping to publish it at some point, but I was reminded of something that I've always wondered about in the BBC adaptation.

The party consists of fauns, dryads, centaurs and talking animals, all dancing round a big bonfire on the Dancing Lawn. I had always imagined it to be a bit like the 'Pastoral Symphony' section of Disney's original Fantasia, all friendly fauns, Pan-pipes and greenery. In both the major adaptations of Prince Caspian, however, it looks quite different. 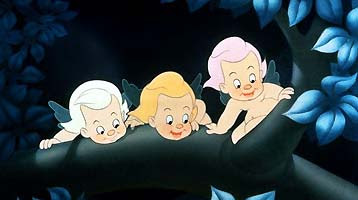 Ridiculously over-cute cherub - Cupid - things, from the Pastoral Symphony section of Fantasia. I'll do a post on that some day too.
Prince Caspian is probably the hardest of the Narnia Chronicles to adapt - or maybe second hardest, after The Last Battle. Both adaptations do reasonably well, and both have their flaws (yes, I do have opinions on what these are, no, I don't have time to describe them all now!).

The BBC adaptation of the Dancing Lawn scene has a very different feel to it from what I (at 6 years old!) had expected from the book. Most prominent among the attendees, other than talking animals, are human-looking characters wearing grass skirts. I assume these are supposed to be related to dryads in some way - though dryads are female and these are male. Their dark hair and grass skirts look very different to the usual pseudo-medieval European Narnian costuming, and, rather than Pan-pipes, they play a pounding, rhythmic drum beat.

The recent film adaptation (dir. Andrew Adamson, 2008) goes a different route again. Here, we have gone back to a Greek theme, but with a different feel. There isn't a party at the Dancing

Lawn, but a meeting, and, in addition to the usual suspects, the attendees include minotaurs (which exist in the plural in Narnia), who were previously among the bad guys in The Lion, the Witch and the Wardrobe. The whole thing is made to feel much darker, as is the movie as a whole.

There are advantages to both approaches. The BBC version emphasises the wildness of the Narnians against the medieval Telmarines and, depending on taste, the party maybe feels a little more exciting with that drum beat. The film version, on the other hand, keeps the essentially Greek feel of the original, but loses all sense of joy or exhileration, in favour of concentrating more fully on military matters. I can't quite decide which I prefer - thoughts, anyone?


By the way, the image at the top of the page is the front cover of the edition of Prince Caspian I had as a child, which is still around, falling to pieces in a box somewhere under my bed in my parents' house.
Books Children's Literature CS Lewis Fantasy literature Films Mythology Narnia Sci-Fi and Fantasy TV