The Roman Mysteries: The Pirates of Pompeii 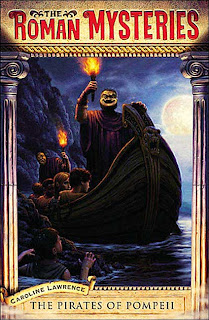 The Pirates of Pompeii is the third of the Roman Mysteries series, but it's the first I've read, because it has some dreams in it that are interesting for my thesis. It takes place near modern Sorrento (Surrentum) just after the eruption of Vesuvius.

I really enjoyed reading this. The story moves at a cracking pace and it's nice to pretend to be on the Mediterranean for a while, even a Mediterranean covered in ash! (For those outside the UK, we are having our third truly horrible summer in a row, weather wise. I am sitting here in a woolly jumper with the heater on).

I missed the previous book, so I'm not sure what happened there and will have to catch up later, but this one finds the children mourning the death of poor Pliny the Elder (why oh why didn't 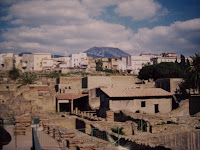 The Doctor save him?!). The story follows them as they get caught up in a dasterdly operation to kidnap children and sell them to slave traders.

The crater of Vesuvius looming over the ruins of Herculaneum
The books pulls no punches on the realities of the slave trade - older children and adults will notice the veiled references to some of what slaves could expect, including a woman who has had two children by her master. Because one of the main characters is a slave, the ordeal of slavery can be described in some detail, though of course Nubia has been lucky and has been treated well by her mistress. (Take note, Harry Potter! This is how you depict slavery in a children's book).

Nubia and Flavia are probably a bit too close to be entirely historically accurate, especially in the way they behave in public and in Flavia's expectation that everyone will treat Nubia as well as she does, but this presents children with a positive view of our heroine and allows the children to interact as normal childhood friends, so it works well. I absolutely love the way Nubia speaks, in slightly stilted, slightly archaic English, to demonstrate that Latin is not her first language.

Children reading these books will come away with plenty of knowledge about the Roman Empire they didn't have before. For the adults, there are oodles of pop culture references to keep us entertained. First laugh-out-loud moment for me was when an announcer for a typical comedy about clever slaves and rich but stupid young men (the book continues with 'and children captured by pirates', which is relevant to the plot; in fact, the third element is usually a beautiful young woman the rich man is chasing) calls himself 'Lucrio' - an anagram of Lurcio, the protagonist of Up Pompeii!, a BBC sitcom and film starring Frankie Howerd from the seventies which blended Plautine comedy and Carry On humour. Later in the book, Jonathan actually says the phrase 'a funny thing happened on the way to the forum' as part of a comedy routine. In another part of pop culture entirely, the hulking strong man for the Patron is called Lucius Brassus.

The parallels with The Godfather help to keep the adults entertained, but they are also entirely justified historically - the family-based system of patronage in the Roman Empire probably is at the root of the modern mafia, though altered through two millennia of history and huge political changes in Italy.

Finally, I have to confess, I actually cried a couple of times while reading this book, mostly during the sections relating to Nubia's capture and to her love of music. I look forward to reading more, especially the books set in Africa. The descriptions of the desert are beautiful (even if they do refer to 'Arabs', who didn't arrive until the 600s AD - at this time, the inhabitants would be Berbers or Phoenicians) and the books are just as detailed in their geographical descriptions as in 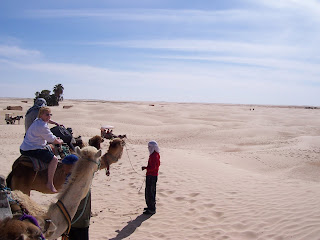 their historical references. (Since I spent most of my childhood trying to reach Narnia through the wardrobe, I would have loved a book with locations you can actually visit!).

Yes, it's another picture of the desert. No, I'm not going to stop shoving them in wherever possible!
Books Camel/Desert pictures Children's Literature Pompeii Roman history Slavery The Roman Mysteries