Most of the elements of Stardust's fantasy world of Stormhold come from various parts of British and Celtic folklore, like the lion and the unicorn (book only). However, there are a few Classical references scattered around the place. Most obviously, the King's seven sons are called Primus, Secundus, Tertius, Quartus, Quintus, Sextus and Septimus. As well as being Latinate versions of first, second, third etc, this actually reflects some old Roman naming practices, in which children were named for their number - Quintus for a boy, Quinta for a girl. Many children did not survive infancy, so a family might only have a Quintus and a Sextus reach maturity, and sometimes children were named directly for their parent - Octavian and Octavia were the children of Octavius, not the eighth son and daughter. The King's only daughter is called Una, one - obviously he knew he would have lots of sons but only one daughter. 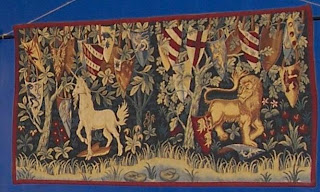 This is a tapestry I got in France of a different story, involving a lot of knights (hence all the shields), which I can't remember right now, but it's a lion and a unicorn...
The witches also have some Classical roots. In the film, their leader is called Lamia. In Greek myth, Lamia was the beautiful queen of Libya, daughter of Belus and Libya, who had children by Zeus. Hera killed her children in a rage, so Lamia took to devouring other children. Over time, her face became ugly and bestial. The Oxford Classical Dictionary describes her a 'nursery bogey', and Diodorus Siculus describes her briefly in the same way (20.41).

The witches also use the ancient divinatory technique of extispicy; killing an animal and examining the entrails (and various other bits) in order to read omens from it (like reading tea leaves. But with more blood). The witches seem to forego the necessary ritual to accompany the sacrifice, but the technique is definitely the same one.

I love both the book and the movie, though I confess a very slight preference for the film. I'm not the biggest fan of bittersweet endings and the film is really beautifully made - an all-star cast of brilliant actors, gorgeous costumes and set design, fabulous music (by Ilan Eshkeri) and sweeping landscapes, mostly from Scotland and Wales (though I think the incredibly cold beach, which highlights the most amazing colour contrast between orange costume and blue sea, might have been Iceland). It's also very, very funny. (And yes, I like Robert de Niro in it. He makes me 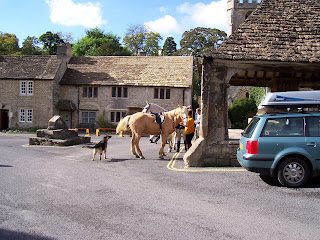 laugh. Michelle Pfeiffer admiring her own naked body in a mirror is another highlight). The film also gives the witch a stronger ending to her story. And I want Claire Danes' dress. The book is great as well though - somehow Gaiman makes the oldest cliché sound, if not fresh, at least plausible.