Bonekickers: The Cradle of Civilisation

Obligatory opening bit filmed by the legendary cameramen of the ancient world: Babylon, 331 BC. Bother – I thought this episode was going to look at ancient Mesopotamia – as in, something from the nearly 3,000 years of history that doesn’t get mentioned often enough in popular culture – but it looks like it will be about Alexander the Great, or something related. Not that there’s anything wrong with Alexander the Great, of course. The next title says ’50 miles south of Baghdad’. This is probably necessary – I’m not sure how many people realise where these places actually were. (One of my favourite ways to make small talk at parties where I can’t think of anything to say is to point out that civilization began in Iraq. People are always surprised). Something weird happens involving a digital special effect. Huh?

Modern day – soldiers everywhere, obviously (this show is very recent, made in 2008). A press van is shot at and a journalist hides in a hole in the ground, where he finds a skeleton and a box with a vase in it. Which no one else had noticed before (like the random ship on Breen).

Back in England, Taggart is pestering her mother about a stolen notebook. The journalist (an American) has made it back that far and is still playing with the pot.

A delegation from Iraq are visiting a Babylonian collection in Bath (I’m pretty sure no such thing exists). They include an archaeologist. The show is referring to as many exciting Babylonian things as it can – the Ishtar Gate and so on – but since it doesn’t explain what they are, it doesn’t mean much.

The archaeologist is an old friend of our lot and stops by for a chat. They all talk a lot about how wonderful ancient Iraq was and about the terrible problems caused by war and looting – all of which is absolutely true and I heartily agree with, but it’s delivered so earnestly as to be very dull and not very engaging. The archaeologist (Kahmil) says he has a brick from the Hanging Gardens of Babylon, and AL insists they were mythological, but for once I don’t agree with him – they may well have been real. But it turns out that the real problem is that Taggart slept with Kahmil six days after AL dumped her, so neither of them is really focused on the archaeology. There’s also a debate running about the interest level of Neolithic toothpicks vs the wonders of the ancient Mediterranean and Middle East, which would be more valid if Taggart hadn’t summarily dismissed Stonehenge as a rock garden.

The journalist sells the stuff to an old man who seems to be trying to sound like DelBoy but looks like the old guy from the Werther’s Original advert. He says the thing shows Tiamat, goddess of evil – and once again we chorus, No, No, No, No, NO! ‘Evil’ is largely a Judaeo-Christian concept and Tiamat was a goddess of the sea, of primordial chaos and, after being killed in a war of the gods by Marduk, her body made heaven and earth. All of which has nothing to do with the modern concept of ‘evil’. And the journalist can’t pronounce ‘cu-ne-i-form’.

Somehow, our guys track down the Werther’s Original guy – I have no idea how. Also, for some reason, every time they say Alexander’s name, they feel the need to say something borderline, sometimes actually, offensive about him being bisexual. I’m not denying that Alexander was bisexual, but the way they keep bringing it up all the time when it’s not relevant definitely borders on homophobic, especially given their tone.

NIJ explains to Viv about how rich and influential Kahmil is. Bizarrely, Viv thinks Kahmil is a lech but isn’t bothered by the ever-horny NIJ. NIJ also manages to find a link with Taggart’s bizarre ‘gleam’ thing, as he thinks meteoric rock could have made her magic sword. Taggart now thinks Alexander made it.

The digital effect is let loose on the Werther’s guy. Kahmil finds him and calls Taggart – Werther’s guy was bitten (fatally) by something (a snake, I’m guessing, judging by the low camera angle on the digital effect and I think someone mentioned a snake earlier). There’s more about Babylon as the cradle of civilization – again, true, but this is TV – show, don’t tell. Like the slavery episode, it’s falling over its own earnestness.

Taggart (talking to a small girl for some reason) thinks that history is a puzzle to solve. And I eat my own arm in frustration – history is not a puzzle you can solve, for pete’s sake, it’s a very long argument between academics trying to understand what the world might have been like in the past but without ever being able to ‘solve’ anything, at least until someone invents a time machine.

According to Kahmil, the ‘Followers of Tiamat’ are here and killed Werther’s guy. (He’s talking to someone in New York, represented by a fancy, modern looking hotel room!). Taggart refers to the possible Werther’s culprits as ‘cultists’ – huh? Who are these people anyway – I’m pretty sure the worship of Tiamat died out a good while ago. The journalist thinks Tiamat was ‘the serpent who enslaved the world’. Presumably they’re getting this from her association with sea serp

No, AL, Tiamat-worship is not like Babylonian devil-worship. No, NIJ, she is not ‘evil’. Grr, argh. Then there’s some stuff about the Enuma Elish and a tablet with a prophecy from a god. The Babylonian Ten Commandments, according to NIJ. Huh? They had the Code of Hammurabi… They haven’t even given the thing a good name – they’re calling it the ‘tablet of destinies’. We’re deep into fairyland here.

Neo-Assyrian 7th century BC cuneiform tablet telling the Epic of Creation
We get further in to fantasyland when Kahmil reveals that he thinks that the tablet predicts that he will reunite Iraq. Apparently he hopes that if people believe it, it will unify them, despite Taggart’s attempts to point out that they already have a religion, and it doesn’t involve Marduk.

Viv is watching a documentary about Alexander made by the media whore, but is dragged out to rescue Taggart by AL – which is good, as Taggart is being stalked – or slithered after – by the digital effect. And bugged. The digital effect is finally revealed to be, in fact, a snake – I’m not sure what kind (the computer-generated kind, mainly). NIJ gets it with a stick and it’s off to find the tablet of destinies – i.e., visit the journalist’s caravan. And break in. When the journalist returns, he pulls a gun on them, but is attacked by the snake (how did the snake get there? Who can say?). He shoots it, our guys get away, he dies. Taggart and Kahmil pick up the little girl, because the guy who’s supposed to be protecting her was following them, and I’m quite lost now but I’m afraid I don’t care enough to work out what’s going on!

The little girl works out from the documentary that the pot has the same markings as something else, and she can decipher it. Just when we thought it couldn’t get any more Harry Potter, they sneak into a museum to read it. Why on earth do they have to sneak in? They’re professional archaeologists! The little girl solves the ‘puzzle’ (they’ve taken the word ‘code’ waaaay too literally) and Kahmil is not impressed with the answer. Then Viv and the little girl are attacked on the way to the toilet – I bet that got messy.

A member of the delegation then attacks Kahmil for putting them all in danger and he is bullied into handing over the box, but our guys get it back. The there’s a melodramatic showdown involving the phrase ‘I live on thin ice, love’ and AL waving a phone around as Taggart talks about a voice from ‘on high’. Basically, Kahmil = good but prone to pulling guns on people when stressed, his New York based brother = bad, 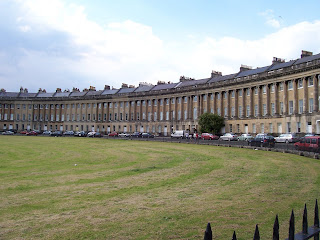 Alexander = bad for hiding the tablet to stop people having hope, delegation woman played by the actress who always plays politician’s aides = bad, Taggart = quite clever for once (albeit reckless with archaeology), kidnapped girl = rescued.

The Crescent, in Bath
Taggart turns down the chance to work with the tablet to go back to Neolithic tooth picks. Kahmil kisses Viv and says ‘I know’, which is very weird and presumably relates to her still-mysterious backstory. Someone leaves Taggart a note with a picture of a sword – it’s a bit like the episodes of Buffy where Angelus is stalking her. She plans to attack the intruder with an Etruscan spear – the woman seriously needs a knuckle-duster and some spray. But whoever it was, they're not there. End of episode.
Alexander the Great Ancient Near East Bonekickers TV