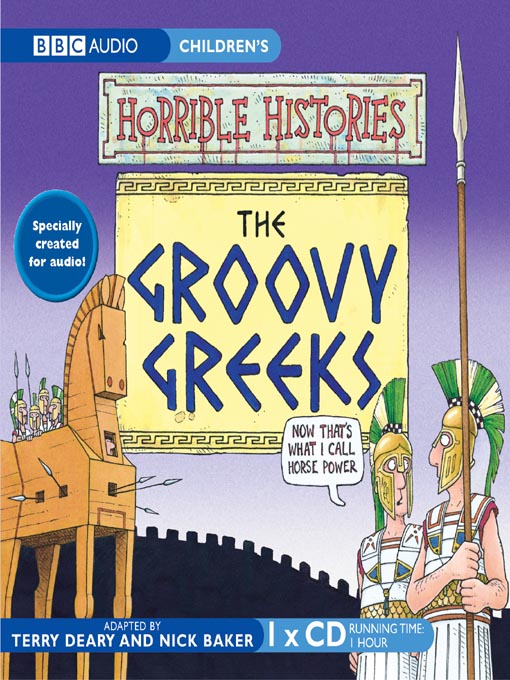 I've written a bit about the 'Horrible Histories' series before, a series for which I make an exception to my general rule of writing about fiction, not popular history or documentary.

The Groovy Greeks is a later book than The Rotten Romans, so the Romans are referred to as 'Rotten' throughout. The titles are partly determined by alliteration, of course, but there is a little bit more to it than that - the book really does imply that the Greeks were 'groovy' while the Romans were 'rotten'. To some extent, this is partly determined by what is appropriate to cover in a children's book. The good side of the Greeks is easy to talk about with children - the development of science, philosophy and history, the Olympic Games, the mythology. The fact that rape was considered a less serious crime than adultery, the conditions in which slaves worked, the fact that Aristotle thought that if a woman looked in the mirror during That Time of the Month it would turn red, thus suggesting he never actually talked to a woman about his theories - all these are patently unsuitable for a children's book. In the case of the Romans, however, some of their worst qualities - the gladiatorial games, their tendency to violently conquer most of the known world - are entirely appropriate, indeed positively good for, a book selling itself as a 'horrible history', designed to appeal to those children who like gore and blood in their stories. Their better qualities, like building roads, inventing ice cream, freeing many more slaves than Athens and allowing their women out a bit more, are either too boring or are only actually impressive if compared to Athens - they still had slavery, many slaves led horrifically awful lives, and they didn't treat women particularly well a lot of the time. I can't help feeling, though, that Deary really does prefer the Greeks to the Romans - much as I like 'em both, as a Romanist (apart from where mythology is concerned) I'll have to politely disagree.

The book includes a fair few myths, which is fine when they're clearly marked out as myths, as with the story of Pandora. But it does have an infuriating tendency to imply that the Trojan War really happened - although it notes some of the less plausible aspects of the story, I suspect impressionable children are not firmly enough told that it didn't really happen.

It's a good book though, and a great way to introduce children to ancient Greece. There's a nice section on Sparta, which includes the Battle of Thermopylae, and a section on Athens which includes Plato's description of the death of Socrates, followed by an excellent visual demonstration of the nature of Athenian democracy - a great political achievement, somewhat lessened by the number of human beings living in Athens who actually had the vote. The section on 'woe for women' is pretty good too. Hopefully children who read this book will learn something more about ancient Greece than that the ancient Greeks wore sheets, ate feta cheese and married their mothers (what I took away from a primary school project on ancient Greece. I actually played Jocasta in a kiddie prodution of Oedipus Rex. I don't think I've yet recovered).
Books Children's Literature Greek history Horrible Histories Popular history