Still recovering from the Oscars... goodness, they were predictable this year! (I had a feeling Hurt Locker might win out - the Academy has been desperate not to give Oscars to anything people actually want to see since Return of the King's victory a few years ago. Very pleased for Kathryn Bigelow though, and though I haven't seen it, I hear that The Hurt Locker is a very worthy winner).

Jesus of Nazareth is a six-hour mini-series covering the life of Jesus from the Anunciation tot he Resurrection. I believe there is also a shorter, 'theatrical' length version (unless I'm mixing it up with Das Boot!). Although it is not always the most popular Jesus film these days, it's my favourite - Robert Powell's central performance is just the right mix of human and slightly other-worldly, the all-star cast are uniformly excellent and the blending of the four Gospels seems well done to me (though I confess I'm not an expert in this area). The portrayal of Judas as a conflicted political activist is done better in Jesus Christ Superstar, and Ian Holm's character Zerah seems rather unnecessary, but otherwise it's very, very good.

Zeffirelli's approach to historical drama tends to be to aim as far as possible for historical authenticity in sets, costumes, background action etc, or at least, to stay as close to what is currently believed to be historical authenticity by historians at the time. So, his Romeo and Juliet is a vision of what we think of as medieval Italy, complete with castles and Juliet caps, while his Hamlet appears to be set in a medieval Danish castle, his Gertrude wearing Germanic-looking long blonde plaits. His earlier religious film, Brother Sun, Sister Moon (about the life of St Francis of Assisi), had used some contemporary music over the 'period' images, but Jesus of Nazareth does not, relying instead of the beautiful score written for it by Maurice Jarre.

Zeffirelli's authenticity is an artistic authenticity though, and many of his scenes are modelled after Renaissance paintings. Although Brother Sun, Sister Moon had included some scenes of injury and illness intended to put across the difficult aspects of life in the medieval period, there are fewer scenes of this nature in Jesus of Nazareth, other than those required by the Gospels involving epilepsy, crucifixion and so on. Zeffirelli's ancient world is striving for authenticity, but is also prettied up a bit.

All this means that his approach to the Romans is also aimed at historical authenticity. Everyone speaks English, but this isn't a problem - we can just assume that they're speaking Greek most of the time, and some Latin when speaking to each other. Costumes, sets and so on aim at authenticity and, as far as I can tell, they achieve it, though the series makes use of the same ninth century Islamic fortress as Life of Brian two years later, so some of the architecture is not quite as authentic as it looks.

Since Jesus of Nazareth is not a Passion play, the Romans take up a proportionally smaller chunk of screentime than they do in Jesus Christ Superstar. Although the series avoids most of the more spectacular miracles (walking on water, turning water into wine) it does include some healings and the raising of Lazarus, and it depicts the virgin birth as just that, with no Roman interference. We see a few Roman soldiers generally treating people not very well, we see the Roman centurion whose slave was cured (who later, in a nice bit of storytelling, turns out to be the centurion who exclaims 'truly this man was the Son of God!' at the crucifixion) and we see Zealot resistence to Rome, but Rome and Romans do not really come to the fore until the series reaches its climax - Roman decrees like the census are seen through the intermediaries of the Jewish kings, Herod the Great and, later, Herod Antipas (Peter Ustinov and Christopher Plummer, both brilliant).

The chief representative of the Roman Empire, though, is Rod Steiger's Pontius Pilate. This is the Pilate you might imagine when hearing the Passion story in Sunday school - a mixture of brusque Roman disinterestedness in Jewish problems and fascination with Jesus himself when they meet. Pilate's questioning of Jesus demonstrates a nice tension between Pilate's desire to ignore unimportant Jewish religious problems and a genuine interest in Jesus, as he asks in perplexion 'what is the truth?'. His delivery of 'Behold the man' is equally beautifully balanced between regret and an almost careless dismissal. Slightly stronger perhaps than the Pilate of Jesus Christ Superstar, his ultimate lack of strong interest, in addition to his desire to avoid riots, seems to be his ultimate motivation for crucifying Jesus even though, as in most adaptations that stick fairly close to the Gospels, he believes him to be innocent of any crime. As a depiction of a Roman governor, this works rather nicely - Pilate is just trying to get through his time here without any disasters occuring in a volatile region, which seems like a fair interpretation.

For the crucifixion scene, Zeffirelli depicts Jesus carrying only the cross-bar of his cross up the hill, rather than the whole cross, which I believe was a popular theory at the time, though I don't know much more about this issue. I do know that the depiction of all victims being both nailed to 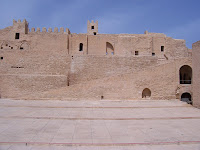 their crosses and tied with ropes is accurate - the ropes would probably be necessary to stop the nails going right through the victims' hands, but Lucan's Civil War, in its description of a witch who lives in graveyards and feeds off corpses, confirms that nails were also used in crucifixions.

The ribat in Monastir, where much of the series was filmed
Zeffirelli's strive for authenticity is very different from that of Rome or other more recent examples. Quite apart from the obvious lack of sex and nudity, Zeffirelli is not out to depict the dirtiness, unpleasantness or even the violence of the ancient world. Rather, he wants to provide an 'authentic' background for the story he's telling which serves that story - it is violent or unpleasant where necessary, but for the most part, he wishes simply to show people getting on with their lives within their historical context. This is, of course, partly determined by his subject matter, since adding sex and violence to the story of the Gospels would make a rather different series and not give it the reverent air it has. But it is also, fundamentally, a different, perhaps an older, approach to the depiction of the ancient world, in which the director is more interested in showing the similairties between us and the ancients than the (sexy, violent) imagined differences.
Biblical stories Films Roman history TV