This is the one where Xena befriends a Trojan refugee called Darius while recovering from an arrow wound, while Gabrielle falls for the guy who shot her.

I get the impression there's a fair bit of backstory from Hercules in this one - the 'bad guys' are keepers of the horses of Ares and Gabrielle's friend's older brother was killed at a peace meeting where Xena was present. It's a pretty good episode, not too predictable and some nice character stuff. I liked the scene showing Xena's combined discomfort and pleasure at putting on a pretty dress a lot, though, as is often the case in these shows, the dress wasn't actually quite pretty enough to create such a reaction (or maybe I was just spoiled because I'd just got back from seeing Tim Burton's Alice in Wonderland, which is a bit like gorgeous-dress-porn).

Intriguingly, the warlords who are the 'bad guys' for most of the episode are wearing very Eastern-looking costumes, which look to me a bit like the pop-cultural view of Genghis Khan (though I know nothing at all about Genghis Khan so maybe that's just me). Except for the dreads the younger man wears, that is. I wasn't sure if they were supposed to come from a different place or area, geographically speaking, or if the different style was supposed to reflect that they were from a particular tribe, or if the costume designer just thought that look said 'bad guy'. The only real drawback, for me anyway, was that one of the victims of the attack was called Darius. Now, I am aware that Genghis Khan was not a Persian and has nothing to do with King 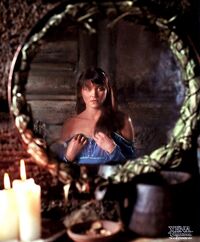 Darius of Persia - but the vaguely eastern look given to these costumes gave me a distinct feeling that 'Darius' should be on their side. I'll be interested to see whether we see this look again, and which characters are wearing it.

It's a nice dress, just not that nice
The actual chariot sequence was quite fun too, though it was shot in one of those locations where I can't quite shake the expectation that a bunch of Orcs are about to come round the corner carrying Merry and Pippin, or possibly the White Witch with a broken wand, in a very bad mood...*

*Yes, I am aware that Xena predates both of these movies. But I saw the movies first.
Costumes Sci-Fi and Fantasy TV Xena