Xena: Warrior Princess: Sins of the Past

This is my first ever exposure to Xena, which I've never actually watched before, I've just heard about it through references in shows like Buffy and Farscape.

I'm not going to go through Xena in quite as much detail as some of the other TV series I usually look at. There are several reasons, the main one being that there's just too much of it! There are so many episodes, recapping them all in detail would be a huge time commitment and I'd never get any work done!

Sometimes I get comments from people who don't like the way I pick up on inaccuracies in historical programmes or explain the actual classical origin of mythical themes. Normally, my response is, I don't say these things to criticise the programmes/films/books - I don't think there's anything wrong with taking some artistic licence with classical material, especially mythical material. The reason I list the various inaccuracies/new interpretations is because I think it's genuinely interesting to discover the 'real' history (or rather, the current academic thinking on the subject!) behind the stories, that's what got me interested in history in the first place. Anyone who's not interested can just skim those bits.

Anyway, the point is, in Xena's case I think explaining the 'real' classical origin of everything that appears on Xena would be a bit too much like me re-telling the whole of Greek history and mythology on the blog. For example, in this episode, there are characters called 'Hecuba', 'Herodotus' and 'Draco', but they bear almost no relation to Herodotus, Hecuba or Draco and it would be pointless for me to go on about Herodotus for ages in relation to this episode. So I'll only go into detail on the original history or mythology if it seems particularly relevant (or if the change is so extreme it takes me out of the story, which can sometimes happen).

So anyway, this is the pilot episode - the one where Xena and Gabrielle meet, where they both run into a Cyclops who has been blinded by Xena and they defeat a punk-looking bad guy called Draco, while Xena makes up with her mother. Xena seems to have comitted some mysterious and terrible atrocities in her past and is now a social outcast (remember, I haven't seen these before, so please forgive my ignorance of the show's basic mythology and please don't spoil it too much for me in the comments!).

Obviously, this episode sets up the basic structure of the series. Xena isn't actually a re-telling of Greek mythology - for starters, there's no Greek character called Xena that I'm aware of, though presumably she's supposed to be an Amazon. The show is actually a fairy tale, which uses Greek myth as the spark for adventures set in a generalised magical world. It isn't even set in Greece, it's set, basically, once upon a time, in a land far, far away. The set up has a lot in common with Narnia, or Middle Earth - a fantasy land with recognisible elements taken from various mythologies, including Greek, but which is really a creation in its own right.

The general look of the show is mainly Robin-Hood-medieval; lots of brightly coloured, vaguely historical-looking costumes and dirty peasants living in small wooden villages. The look of the show reminds me of the various planets of Stargate: SG-1 more than anything else. Although it's filmed in New Zealand rather than Canada (I'm sure I spotted the site of the Battle of Beruna at one point) it has that general look that says the producers were going for something vaguely pseudo-medieval on a limited budget. All of this emphasises and reinforces the fairy tale feel of the show.

The use of the Cyclops was quite fun, played mainly for laughs which suits a giant, one-eyed, blind character (subject of the only surviving satyr play we have). There wasn't much Greek myth in this episode aside from the Cyclops, but I did enjoy Xena's battle with a big stick, which reminded me very much of Robin Hood and Little John.

As for the main characters, Xena is pretty bland so far, though I'm genuinely interested in her dark past and she did a rather cool move that The Matrix would use a lot more technology to produce some years later. Gabrielle, 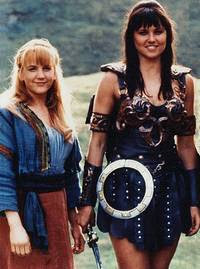 so far, seems kinda hyper - she's all about big, wide-eyed acting and throwing her arms around a lot. We wondered if she was slightly high. I did, however, notice that the first thing we see Xena do (after some ritual burying of armour and some general rejection) is rescue Gabrielle and some other girls from slavery, immediately setting out the show's relatively feminist (in some ways) outlook (and presumably coming across as more radical in the pre-Buffy era). Hopefully Gabrielle will have calmed down a bit in the next episode!
Mythology Sci-Fi and Fantasy TV Xena