I finally got to see Clash of the Titans! And about three quarters of the way through it occured to me that, though it's unlikely to make any lists of the Best Films Ever, it's not actually that bad.

The plot is genuinely interesting - what would happen if mankind declared war on the gods? Although this seems like a rather foolish thing to do in a world where the gods clearly and unmistakebly manifest themselves and attack those who do not worship them (like the Discworld character who stands on a hilltop wearing copper armour in a thunderstorm shouting 'all gods are bastards', or something to that effect) there's a certain amount of philosophical interest in the question (the leading of Andromeda to sacrifice is reminiscent of CS Lewis' Till We Have Faces). The idea that the gods need worship and prayer is also very reminiscent of the Discworld, and possibly of Neil Gaiman's American Gods, which I'm still halfway through (no spoilers please!). The idea that Zeus feeds on love and Hades on fear is also an interesting one, perhaps setting them up as stand-ins for a Judaeo-Christian God and Satan. Of course, none of these ideas are explored in depth, but they are there.

On the other hand, this is the movie that had the worst tagline in history - Titans Will Clash! - which also turned out to be a blatant false advertising, as at no point in the course of this movie did any Titans clash in any way whatsover. Medusa is a Gorgon and the Kraken in from Norse mythology, which I know very little about - neither of them are Titans and they don't clash anyway, Perseus just holds up Medusa's dead head (there's a complete list of Titans here). Also, the other major clash, between the gods Zeus and Hades, is actually clearly a battle between Aslan and Lord Voldemort, with Aslan wearing King Arthur's armour from Excalibur. (And the Argosians seem to think they're living in Rome).

Some elements of the film's plot are from the Greek myths of Perseus - Medusa, Andromeda as sacrifice, the box the baby and his mother are found in. However, several elements have been changed, most notably that Perseus is the child of the king's wife, not his daughter, so that the box is vengeance for a grievance against the king, not an attempt to prevent his daughter from having a son that would kill him. Pegasus is also more strongly associated with Bellerophon, and although his birth from Medusa's severed neck makes his presence not totally unwarranted, here there is a whole herd, if that's the right collective noun, of Pegasi. Io, in this movie, is cursed with 'agelessness' rather than, somewhat less attractively, being turned into a cow, which is not very Greek, but does allow her to be a totally awesome action girl love interest.

In addition to the Norse Kraken, we have Arabian Djinn taking on a major role, whom I know pretty much nothing about and hadn't really heard of - except in Genie form - until I read the first half of American Gods. And there are some giant scorpions, not totally

unknown in Greek myth but hardly an integral part of it. There are also some camels, yay! Although on that subject, I have to ask - where exactly are they? It looks like perhaps they're trekking across the Arabian desert, but why are the 'Stygian gardens' - whatever the heck they are, something to do with the underworld from the name - in the Arabian desert? Why is the entrance to the underworld there? (There's no fixed place for underworld entrances, it's just unusual). And why is Medusa, whose backstory has been substantially changed, in the underworld anyway?

Another slight problem with the film was that it's one of those OK films that remind you too much of a better film - in this case, Disney's Hercules. The two random 'hunters' claim several of the Labours of Hercules for themselves (they mention the Nemean Lion's skin, though Hercules wrestled it to death, and the hydra). Then there's Pegasus, Hades as the bad guy, the 'Stygian witches' who are pretty clearly the Fates as depicted in Hercules, and at the beginning, when Gemma Arterton was doing her voiceover, I was desperate for the Gospel singers to burst in and liven things up.

There are lots of other things I could pick apart - the way Zeus offers to take Perseus to Olympus as a god, which doesn't happen to demigods in Greek myth, the way Io screams when stabbed from behind, demonstrating that she has not discussed the matter with Sir Christopher Lee who, according to Peter Jackson on the Return of the King commentary, knows that people don't scream when stabbed from behind, the curious fact that the 'Stygian gardens', whatever they are, look just like Blaenau Ffestiniog. But there are really lots of good things about this movie too - the CG-set of Olympus looks good, and the equally CG underworld is wonderfully, creepily realised, especially the twisted wreck of a ferry and skeletal Charon the ferryman. Perseus is a idiot (use the magic sword for crying out loud!) but the supporting characters are reasonably likeable and there's just enough humour to keep things afloat. And the ideas are there, whether it's the gods' need for mankind, the idea that if men turn on each other they will be more inclined to turn to the gods, or the idea that mankind themselves are responsible for the rise of Hades; they're just very, very buried. All in all, you could see wor 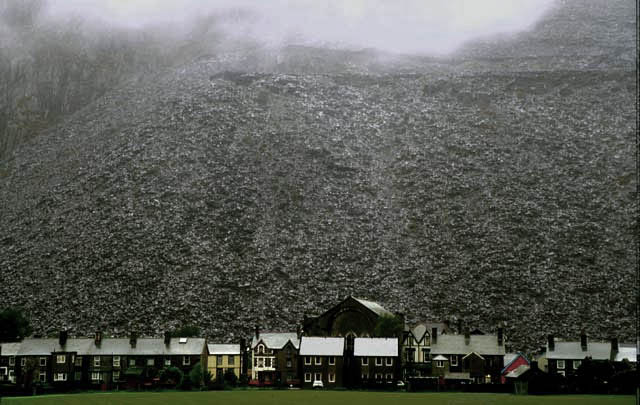 se films, though I don't deny you could also see better.

Blaenau Ffestiniog. Or, possibly, the Stygian Gardens.
One last point on Titans - this was the first 3D film that I've gone to see wearing my glasses rather than contact lenses and my goodness it was uncomfortable. Since not everyone can afford or wear contact lenses and plenty of us wear glasses, I think more design work is needed on the glasses before we all embrace 3D as the medium of the future.

And a final note - I also went to see Robin Hood at the weekend, which I really enjoyed - it wasn't necessarily historically accurate, but it did take a different approach to the legend, which was fun to see, and had a more complex plot than most Robin Hood films. There's a fuller review of it at Here, There and Everywhere.
Camel/Desert pictures Films Mythical creatures Mythology Sci-Fi and Fantasy