I absolutely love The Mummy. It’s a perfect action-adventure film, with lots of humour, gorgeous set design, extremely attractive leads (not to mention the supporting cast) and a story that, despite a certain inherent silliness, is rooted in strong characters and well-structured plotting. I’ve read a lot of reviews that see it as derivative of the Indiana Jones movies, but since I saw The Mummy long before I saw any Indiana Jones, that doesn’t bother me and I much prefer The Mummy (it probably helps that, unlike Indiana Jones, I saw The Mummy in the cinema). This is also the film that includes the classic line ‘I’m proud of what I am – I’m a librarian!’ which is fun to quote, with optional substitution of ‘archaeologist’, ‘classicist’, ‘historian’ etc for ‘librarian’.

I don’t know much about the history of Mummy-stories, but as far as I know in their current form they date back to the horror movies of the 1930s, themselves inspired by the opening of Tutankhamun’s tomb in 1922 (though of course stories about the undead and zombie-like creatures in general are much older). This film is a loose (very loose) remake of the 1932 original, which is why it’s set in the 1920s. The setting is a brilliant move, as being limited to 1920s technology makes escaping across the desert that much more difficult, and provides an opportunity for some lovely costumes. The whole thing looks fantastic (yes, even the CGI, which may look ropey now but was groundbreaking way back in 1999) and reminds me of how much I want to visit Egypt some day (I’ve wanted to see Egypt ever since I saw Death on the Nile when I was little). John Hannah still can’t quite master any accent other than Scottish, but his Jonathan is so endearing, we don’t care.

Imhotep, named for the mummy in the 1932 The Mummy, is the name of a very, very early Egyptian architect who designed the first Egyptian pyramid, the Step Pyramid of Djoser, and was later one of very few non-royal Egyptians to be deified. The connection with pyramids and, therefore, mummies and with the meeting of human and divine makes his name rather suitable for The Mummy, though of course the real Imhotep was not thought to be undead, nor a demon-creature – he was a god of wisdom, writing and medicine. One of the many great things about this movie is the strong backstory given to the Mummy himself. 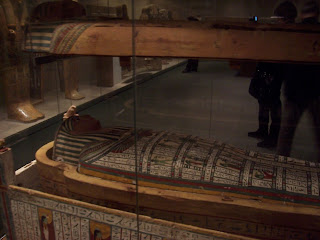 You genuinely feel sorry for Imhotep and Ankh-su-thingy and I especially love her line as she kills herself – ‘My body is no longer his temple’. It’s quite a powerful line (if anachronistic for ancient Egypt)and you can’t help rooting for her a little bit there.

A mummy, currently in the Metropolitan Museum of Art in New York
I’m not sure how we’re spelling the name of Pharaoh’s bodyguards, but it sounds like ‘Magi’ (edited: but see comments below). The Magi were Persian priests, whom the Romans associated with magic and magical practices, and we get the words ‘magic’ and ‘mage’ from them. They are mostly known now as the ‘wise men’ from the Christmas story; astrology was an important aspect of Persian religion and they were priests rather than philosophers, though ‘wise men’ isn’t as far off the mark as ‘three kings’. (By the way, listen to the actual words spoken by the very sexy lead Magi whose name escapes me – my old housemate has pointed out that he says exactly the same thing every time, just with slightly different emphasis).

The Book of the Dead is a real thing, but rather less exciting than the one seen here – it’s a book of funerary rituals. I’m not aware of a real Book of Amun-Ra, though there may be one I haven't come across. Our heroes find Imhotep’s coffin buried at the base of a statue of Anubis, the canine god of mummification known as Mr Jackal in American Gods. The Book of Amun-Ra is at the base of a statue of Horus, a bird-god of the sky and of the reigning deified Pharaoh.

Evie’s library seems to be stocked with a combination of classical and Egyptological material, including Socrates as well as what are presumably books about people called Tuthmosis (the name of four Egyptian Pharaohs) rather than by them. Those library shelves really should have been pinned in to the floor though.

The film is full of little things that enrich it, from poor Winston, suffering from survivor guilt following World War One, to the Mummy recognising ‘the language of the slaves’ when cowardly Benny, having gone through most of the world’s major religions in a desperate attempt to save himself, says a Hebrew prayer (and to the best of my knowledge, this is historically plausible, as the Pharaoh seen in Exodus has been variously identified as this Pharaoh's son, grandson or father, among others). The ‘Bembridge scholars’ are clearly standing in for Oxbridge without actually having a go at Oxford or Cambridge and one can empathise with Evie’s frustration at her rejection given the period - in the early twentieth century, women in archaeology and anthropology and related areas were not unknown, but scholars like Jane Harrison had to combat a lot of prejudice and were not always afforded as much respect as their peers. Her ‘take that Bembridge scholars!’ is particularly satisfying.

Quite why the Biblical plagues, part of Judaeo-Christian tradition and caused by the anger of God, would be brought down on Egypt by the resurrection through Egyptian ritual of an Egyptian mummy is not explained, but these are probably questions we’re not supposed to ask. Also, we have the usual issues with the movies thinking translation is a rather more precise art than it really is, which no ancient-themed fantasy adventure is complete without.

The Mummy is a brilliant film, and the first of the sequels, though not nearly as good, isn’t too bad either. I haven’t seen the most recent film in the series, but I’m suspicious of a Mummy film without Rachel Weis 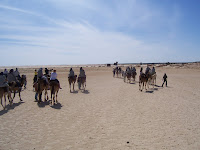 z – her chemistry with Brenden Fraser is part of what makes the film so good. Well, that and the many gorgeous shots of camels in the desert of course!

Photo taken by another best friend/ex-housemate, from atop a camel in Tunisia
Archaeology Camel/Desert pictures Classics and Classicists Egyptology Films Mythology Sci-Fi and Fantasy