Rome: The Ram has Touched the Wall

Pop Classics is one year old today! Woo, happy birthday to us! Thank you to everyone who has read, commented on, linked to and otherwise supported the blog over this past year. I love writing it and I hope you enjoy reading it.

So, to celebrate, a slightly overdue proper Rome post.

We open on the uninspiring site of Pompey's gang, trying to write a truce acceptance in response to Caesar's recent offer, while Caesar has 'not yet left Rome' (see last time and, indeed, Rubicon for what's wrong with that statement).

Caesar, meanwhile, is dishing out mercy to those who desert Pompey for him and trying to avoid going to dinner with Atia. Atia herself thinks, as others do, that Octavian has been having it off with Caesar in a cupboard and is very pleased, and the fact that Octavian is busy painting Octavia's toenails when she asks him about it does not lend his true explanation any credence.

Boring Soldier is sorting out his daughter's marriage while Niobe angsts about the fact that this means her secret love child will be taken away, and Dodgey Soldier sleeps on the stairs outside. He's developed an exciting obsession with Eirene, the slave girl he took when she was abandoned by Pompey's men. She has been taken as an IOU by a tavern keeper, and Boring predictably and resignedly buys her, only to find Niobe doesn't want her because 'she has strange eyes' (really, because she thinks the girl is a spy for Dodgey Soldier).

Caesar is a bit miffed that Pompey offered a truce, which wasn't really want he wanted, and Mark Antony helpfully provides the episode's title, 'the ram has touched the wall', by which he means, they should show no mercy. Caesar decides that he will use Pompey's refusal to meet face to face as an excuse to refuse the truce, but still wants to hang around in Rome to continue sleeping with Servilia, who has a rather unrealistic demand that he should never leave her again. Mark Antony mentions this to Atia, who decides she needs to separate them so that Caesar will chase after and defeat Pompey, though Octavian tries to dissuade her.

Boring finds himself in unexpected financial trouble, as his slaves, whom he was planning to sell, have all caught some unpleasant infectious disease. Dodgey, meanwhile, has been hired by Atia to teach Octavian 'the masculine arts', much to Octavian's disappointment, who would have preferred Boring (unsurprisingly). Fighting comes first, which Octavian is rubbish at - not because he has any problem with killing people, as he reassures Dodgey, but because he doesn't like waving a sword around and feels that being only a mediocre swordsman is probably rather dangerous. This is a rather nice interpretation of Octavian's character and abilities;

we know he had no problem with killing from the number of propscriptions he issued as dictator, but we also know that he had a tendency to claim he needed to avoid a battle because his doctor had a dream, and his greatest victory was really won by Marcus Agrippa.

Dodgey Soldier demonstrates a bit of intelligence for once, as he decides to ask Octavian for advice about Niobe and her brother-in-law - while Octavian is no great relationship counsellor, he is by far the most intelligent person any of them know and wisely advises Dodgey that they need to fully ascertain the facts before doing anything about it. Of course, this being Dodgey Soldier and Ruthless Future Emperor, their methods will be less praiseworthy... Max Pirkis continues to be absolutely note-perfect as Octavian, all cold intellect and careful thought and totally unruffled by anything.

There are a lot of shots of Pompey standing around artistically on a beach in this episode. Maybe it was a nice day and they all wanted to get some sun.

Boring Soldier goes to a sauna-like bit of a bathhouse (the tepidarium) to borrow money, a transaction apparently carried out while half-naked. The money-lender suggests that he could employ him as a hard man, which, of course, Boring has moral issues with but he agrees. Straight away he's off breaking arms and is ordered to cut the throat of one 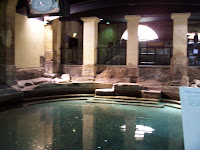 debtor, which, of course, he refuses to do, thus incurring the wrath of The Godfather. Oops. At least Niobe is supportive of his choice for once.

This is not, in fact the tepidarium at Bath, as the tepidarium had no water in it, but it is a picture of one of the rooms at the Roman baths at Bath that worked out rather better and less dark.
Calpurnia is mocked as she travels through a street apparently entirely decorated by graffitti showing Caesar and Servilia at it and saves Atia a job by demanding that Caesar drop Servilia, or she'll divorce him (which can't happen, as he needs her family). So Caesar dumps Servilia, who is not comforted by his assurance that he does still love her and it's all for the good of the Republic, and who gets very cross, only for Caesar to slap her and leave.

Caesar heads off to chase Pompey but tells Mark Antony to stay behind and keep the peace in the city, at which Antony sulks manfully. Pompey is still hanging around on the beach and Cicero, who is clearly bored of sunbathing, tells Brutus that he is off to his farm nearby. He offers to take Brutus with him and when Brutus refuses, feels he had better stay himself to avoid looking cowardly, but this is unlikely to last long.

Boring Soldier tries to go and belatedly accept Mark Antony's offer from the previous episode and luckily for him, Antony allows him to take the job, albeit for less money. Boring continues to angst about selling himself to a tyrant for the rest of the episode.

It turns out the graffitti was drawn by Atia's slave Timon - Servilia and Caesar's break-up was Atia's doing after all. Servilia is Not Happy and curses Caesar and Atia with some exciting curses to appropriate deities (like Tyche, Luck, and Nemesis) involving bad things happening to Caesar's manhood and Atia living for a long time in misery.

We haven't seen quite enough actual violence in this episode for the producer's tastes, so Octavian and Dodgey Soldier kidnap Niobe's brother-in-law and... question him about his relationship with Niobe. Dodgey Soldier almost believes his denials, but Octavian isn't buying it and calmly informs the man that they know he's lying, they have to kill him, and they'd rather kill him quickly and painlessly than torture him to death. Octavian is happier with the whole torturing thing than Dodgey Soldier, who has a lovely little new curse word that won't enamour him to the goddess concerned (Juno's c**t!). They kill the unfortunate adulterer and agree that Boring Soldier must never know the truth (if he knew, he would have the right to kill Niobe and the child, though whether this is their motive of they've just trying to spare him emotional pain is unclear).

Not a bad episode, it avoids anything really ridiculous though it's extremely low on actual history (as in, there is none, except for Octavian's characterisation and even that is demonstrated through fictional actions). Boring Soldier's story is relatively engaging, and you have to feel for Servilia and Calpurnia as well. Overall though, the episode suffers chiefly from being rather downbeat, both in terms of mood and in a lack of action. Lack of action would be fine in a quieter period (I, Claudius episodes, for example, are not known for their high action content) but replacing an actual siege with a lot of Boring Soldier angsting is a little disappointing - even I, Claudius' budget had room for a very dirty soldier to turn up and at lea

st narrate the events in the Teutoberg Forest, although we couldn't actually see them. Not bad though, and memorable enough to hold the interest, mostly in the scenes between Octavian and Dodgey Soldier.