This is a Classic episode of Star Trek in every sense of the word. It’s an Original Series episode (which I tend to refer to by the rather less flattering TOS but which is often called Classic Trek), it’s an absolutely brilliant episode (it would be the best of season 1 if season 1 didn’t also include ‘City of the Edge of Forever’, the Best Episode of Star Trek Ever Made™) and it’s got a Classical basis. This is the episode that introduced us to the Romulans, one of Star Trek’s most enduring bad guys. In their later appearances, the Classical link is sometimes downplayed or buried under their Trek-related history, though it’s not forgotten; they have a Roman-inspired political structure, Romulus has a twin planet called Remus, and the new movie named its Romulan bad guy Nero. But in this introductory episode, their Romanness is more essential to their identity than it would ever be again. Spoilers follow.

Mum and I were both surprised to discover, on re-watching season 1 on DVD, that the Romulans were introduced earlier than the Klingons – the Klingons are such iconic Trek baddies that we just assumed they were also the oldest of them (not to mention the fact that here, it’s the Romulans that fly a Bird of Prey, associated in all the movies with the Klingons). Whereas the Klingons, in their original series incarnation, are Asiatic warriors with a battle-obsession, the Romulans are much colder customers and, most importantly, they look exactly like Vulcans. This story is one of Trek’s excellent Cold War metaphors, with the Enterprise and the Romulan ship having, essentially, a submarine battle in space (complete with a ‘Crazy Ivan’-type move and a nuclear warhead) and one of the B plots concerns a racist crewmember’s obsession with the idea that Spock might be a Romulan spy, because Romulans and Vulcans are related. Although Klingons in the original series look human, and Klingon spies appear in episodes like the classic-for-a-different-reason ‘The Trouble with Tribbles’, the particular metaphor here concerns Spock as an outsider on the Enterprise who appears, superficially, to have more in common with the Romulans, presumably standing in for people with a loose connection to Russia or a Slavic country in the States in the 1960s. [Edited to add: It's been pointed out in the comments below that the submarine battle probably reflects World War Two more than the Cold War per se, and on Tor.com that the Romulans also share traits with the Japanese as preceived by the Americans, so that may be the metaphor they were going for at the time - to me, a British child of the 1980s, it reminds me of the 1980s Cold War movies I grew up with!] The episode consists of a battle of wits between Kirk and the Romulan commander, rather confusingly but compellingly played by Mark Lenard (better known as Sarek, Spock’s father). I won’t recap the whole episode, because it’s much more about the building tension between the two captains than anything else and a blow-by-blow rehash of it would destroy the drama, but I will say that any episode that starts with a wedding ceremony that gets interrupted is Not Going to End Well.

So, the writers of this episode needed to create an intelligent and threatening enemy that looked like Vulcans. What made them think of the Romans? I suspect it was the Empire and the legendary skill of the Roman Army that appealed to them. The Romulans inhabit an Empire on the other side of the Neutral Zone – and the Roman Empire is the classic archetypal empire for science fiction writers (see the Senate in the Star Wars prequels, for example). Perhaps this was the original inspiration behind their Roman characteristics (there’s no in-universe explanation for the similarities given, it’s just accepted as part of the narrative). The Romulan commander, rather than emphasising glory and honour in battle (also Classical traits of course, but not necessarily specifically Classical, used later for the Klingons) tends to emphasise training and military order and duty, like the highly trained and extremely well-organised Roman army. Devotion to military duty is another crucial issue in this episode; the deaths of the unnamed Romulan commander and the bridegroom Tomlinson are the same tragedy, both men killed in the line of duty.

Having made the comparison, other, more superficial elements of Romanness are easy to include. The Romulan commander’s second-in-command, for example, is referred to as ‘Centurion’ and their ultimate boss is a 'Praetor'. The Romulan costumes echo the line of a toga as it comes over the shoulder, though unfortunately the Imperial purple or the traditional red has been replaced with a rather camp 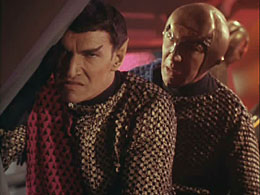 pink – but this particular shade of pink was something of a favourite in the psychedelic 60s Original Series. They also look like they’re wearing the carpets – clearly, Star Trek costume designers are convinced that the Romans, if they were around in the future, would be wearing floor coverings.

'What's wrong Commander?' 'My carpet-suit is itching like crazy!'
Both the Romulans and the Klingons, in their first appearances, are part of a ‘we’re not so different after all’ theme that echoes across Original Series bad guys (in marked contrast to later series' favourite bad guys, the Borg). In the case of the Klingons, Kirk’s interactions with the Klingon commander force him to confront the fact that he’s as bad as the Klingon is. In the case of the Romulans, however, it is more a case of realising that the Romulan commander is no worse than Kirk – certainly not less intelligent and not less considerate or caring either – he’s a man doing his duty, it’s just unfortunate that he’s liable to cause an intergalactic war in the process. For this reason, the Centurion is a really important character – he demonstrates both his commander’s compassion, as we see how affected he is by his death, but also his ruthless dedication to his mission, as he is not above using his friend’s dead body in a military manoeuver.

Ultimately, we are intended to admire the Romulan commander, and to care what happens to him. The Roman Empire is the perfect model for such a character, because Western culture has such a love-hate relationship with it. On the one hand, we have a democracy that failed and was replaced by an dictatorship occasionally taken over by madmen, which conquered thousands of miles worth of other people’s territory and hung on to it tooth and nail – not behaviour we’re supposed to approve of. On the other hand, we have a civilisation that gave us Latin, great literature, baths, roads, central heating and garlic ice cream – the list of the Romans’ accomplishments is well known. So what better basis for the commander who is equal to Kirk, who is compassionate but ruthless, whose defeat is necessary but not glorious? Not!Sarek spells it out for us with his final words to Kirk: ‘You and I are of a kind. In a different reality I could have called you friend.’ Whereas the later Klingon commander’s insistence on their similarity was horrifying to Kirk, partly because it was based on bloodlust, he is honoured by this comparison. This is why the Romulans have never gained the cultural status of the Klingons; for a long time, the Klingons had few redeeming qualities and could be held up as really bad bad guys, there to be hated and defeated (which is often more fun in fiction). The R

omulans, however, were a bit more complex, and were not designed to be hated utterly, which makes them harder to fit into popular songs, but rather more interesting as antagonists.

This episode also featured Yeoman Rand and Kirk's last inappropriate cuddle - having been his love interest from the start, she disappeared after this episode and did not reappear until the feature films in the 1980s.
(Oh, if you haven't already, click on that last link - it's strangely awesome).
Roman history Sci-Fi and Fantasy Star Trek TV