Unfortunately, this is probably one of the least flattering popular uses of the Classical world, coming straight from my beloved Voyager! Voyager did some really interesting episodes about the nature of history - I'll be blogging 'Living Witness' at some point, which I think is Voyager's best episode and is all about the nature of history and archaeology - and this one is equally interesting, but not always overly kind to us history nerds.

The main story in this episode is about one of Captain Janeway's ancestors, a woman called Shannon O'Donnell (also played by Kate Mulgrew), who was instrumental in setting up a fictitious 'Millennium Gate' which was Earth's first biosphere and the model for the first Martian colony (Uuuuuuu-laaaaaa! Ahem. Excuse me.). The episode, as you've probably guessed, was written in 1999, though it's actually set on New Year's Eve, 2000, on the assumption that everyone decided to celebrate the 'real' milennium that year (according to the argument voiced at the time that, since there's no AD 0, 2001 was actually the start of the new millennium). An old (a bit too old for Shannon, I always think) bookshop owner called Henry Janeway must agree to be relocated before midnight or they'll have to move and find another site. Shannon persuades him - at the last minute, of course - to give in and allow the dome to be built and his shop to be destroyed.

So, basically, the episode pits the history-loving, book-loving, old-fashioned guy Janeway against the trained-by-NASA, scientist/engineer, future-loving O'Donnell and, of course, O'Donnell comes out on top. Throughout the episode, Janeway peppers his conversation with constant references to the Classics, both Roman politics and Greek mythology. I lost track of the number of ancient references while watching, though I do seem to remember his son (Jason - another Classical reference) claiming that Heracles was the child of a single parent family, which isn't usually true as far as I recall (he's brought up by his biological mother and stepfather). There's also a reference that quite nicely blends the two themes of the episode - instead of 'nobody here but us chickens', all three characters say 'nobody here but us galloforms', the scientific name for chickens - which appeals to O'Donnell and is, of course, Latin-derived. Anyway, Janeway's Classical obsession is symptomatic of his habit of 'only looking backwards', of living in the past and caring more about the past than the future - which, according to the episode (and, to be fair, in real life as well most of the time) - is Not A Good Thing.

It's all very unflattering to those of us who've made careers of preserving the past! Janeway is stuck in his ways, unable to see the future, unbending and totally at odds with the rest of the town, who are all in favour of the dome. Still, the episode does express some more positive feelings towards history on occasion. Janeway sets up a book about Paris at the dinner table to make it seem like they're dining in Paris, which is nice, and there's never any suggestion that his bookshop should be destroyed, only moved to a new location. Indeed, much of the episode is about the importance of the past to those of us in the present.

The wrap-around story on Voyager itself concerns the first risk of genealogical research, the thing that every family history website will warn you about if you're just starting to explore your own family history - you may find out things you didn't want to know. Family legends, in particular, may turn out hold hardly any truth and you may find yourself having to re-evaluate your ancestors' history. Janeway's family had built O'Donnell up into a heroine, a pioneer and someone vitally important to the history of the biosphere - not someone who just happened to work on it and managed to persuade a shopkeeper to move. When Paris lets slip the truth (because he's fascinated by twentieth century history and vehicles in particular, a satisfyingly enduring character trait) Janeway is deeply upset. Neelix and the others persuade her, however, that she should still feel proud of her ancestor and that it was fortunate that she was inspired by the stories, even if they 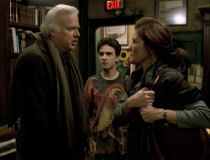 weren't true. It's all rather nice, and certainly an important warning for anyone looking into their family history, as it's something that often happens in real genealogical research.

So, perhaps the episode isn't so unflattering as a bare synopsis makes it seem. Still, considering the importance of Greek and Roman culture in the modern world it seems a bit of a shame, if not entirely a surprise, that Classics is chosen as the prime example of something deep in the past, that is no longer so important, suggesting that excessive interest in the subject may lead to an inability to see the future or work for the best interests of your children (Jason is in favour of the biosphere). On the other hand, the trivia about ancient Greece and Rome is also part of Janeway's charm, which is obviously considerable considering how many children and grandchildren they had, so at least we can comfort ourselves with the knowledge that the ancient world, even when it is depicted as less relevant, is still understood as inherently interesting!
Classics and Classicists Latin Mythology Sci-Fi and Fantasy Star Trek TV