Harry Potter and the Chamber of Secrets (dir. Chris Columbus, 2002)

This is probably my least favourite of the Harry Potter films, though I enjoyed the book on first reading. The film seems to have all the flaws of Philosopher's Stone (false and forced sounding delivery from several places, which I put down to direction as they've all been perfectly good in other things, far too much crammed into an episodic and overlong storyline and although the sets and architecture look great, the landscape and weather is not very authentic) without the essential charm and magical, almost Christmassy feel of the first. Some of the problems come from the source novel, of course - the House Elves, my least favourite aspect of Harry's world, are introduced here, Ron throws up slugs (just disgusting), there are masses of giant spiders, every single female character turns into a drooling idiot at the sight of Gilderoy Lockhart and although Hagrid starts out well, rescuing Harry from Diagon Alley comforting Hermione, this book features him at his most dangerously stupid and irritating (no, Hagrid, you shouldn't send schoolboys off to talk to giant man-eating spiders).

It's not all bad though. The first time I read the book, I was really impressed, mainly because the petrification of Hermione and the identification of Ginny as the (mind-controlled) culprit were genuinely surprising, and the finale is exciting and much more plausible than that of Philosopher's Stone (those spells 'protecting' the Stone make no sense at all, except Dumbledore's). The movie does this well, the random North by Northwest-style of the sets works, and I think Daniel Radcliffe does a pretty good job of the nearly-dead-acting required. The reaction of the female characters to Lockhart is infuriating, but the character himself is pretty funny and Kenneth Branagh plays him well (but then, I think I could probably watch Kenneth Branagh read the phone book). The Burrow looks great too and the casting is perfect (plus we get the wonderful lines 'Mummy, have you seen my jumper?' 'Yes, dear, it was on the cat!'). Casting an adult as Moaning Myrtle was a bit of a surprise, but because she's so 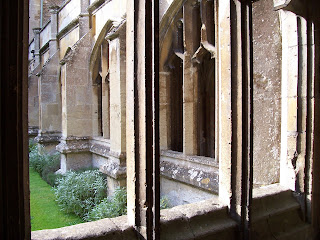 translucent (and Shirley Henderson is very good) they just about get away with it. The duels are rather good too.

Another view of Lacock. They stopped filming there after this film, and just stuck to sets.
The idea of the cry of the mandrake that kills those who hear it is best attested from Shakespeare onwards, but it is thought to have had its root (hehe) in the ancient world. Josephus mentions the danger of the mandrake and the difficulty of digging it up, though not specifically the scream (Jewish War, 7.6.3), and Pliny the Elder just says people avoid having the wind in their face while digging it up (Natural History 25.94); he adds that it can be used to treat the eyes.

Pliny is a bit more forthcoming on the Basilisci Serpentis, which apparently lives in North Africa, moves with its middle up the air, and can kill a man with poison transmitted through a spear and his clothing (Natural History 8.78). What Pliny is describing, though, isn't a mythological animal, but an animal that Pliny believed rally existed, so there is no petrification by sight; that belonged only in the realm of myth. He also says it's not much more than twelve inches long. The possibly giant, petrifying version seems to be a later, medieval, development.

We do, of course, see one solidly classical mythological beast in this film - Fawkes the phoenix. Having said that, Herodotus describes the phoenix as a real, though extremely rare, bird, which creates a egg of myrrh in which it carries its father to the temple of Helios (the sun) in Egypt (2.73). But we have some proper mythological sources for it as well, including Ovid's Metamorphoses - though even Ovid describes the phoenix born from the ashes as the offspring of the recently deceased 500-year-old bird, not the same bird reborn (15.385ff). Philostratos thought it sang it's own funeral dirge, like a swan (Life of Apollonius of Tyana, 3.49) but it's Claudian, a fourth century poet, who implies that the reborn phoenix is the same animal as the 'father' phoenix, and significantly one of the two poems in which he does so is about the rape of Persephone, a myth that signifies the death and rebirth of vegetation with the passing seasons (The Phoenix and The Rape of Proserpine 2.78ff). All agree that the phoenix lives for at least five hundred years, in which case Harry's walking in on Fawkes just as he burns is a staggering coincidence.

As far as I know, Rowling added the healing powers of phoenix tears and their ability to carry very heavy loads for plot-related purposes (I wonder if she was inspired in part by Tolkien's fondness for eagles ex machina?). Obviously, let me know in the comments if anyone knows of any other sources that list these as phoenix properties, but I'm not aware of any! Bizarrely, there are now, it seems, companies selling health products called 'phoenix tears' - Rowling has actually successfully added to a two and a half thousand year old myth (Tolkien must be turning green with envy in his grave). I like how Fawkes seems to be a very rare bird in the Potterverse - not the only one in the world, but phoenixes, it is implied, are few and far between and pretty special.

This seems appropriate for a bird that can auto-regenerate and can fix any number of dire injuries by crying on them. Fawkes himself is rather beautiful. I'm so glad he's an animatronic creation rather than CGI - it makes him so much more solid and real, and the tilt of his head is rather endearing (though the CGI on his burning is very effective).

It really is far too long, but I can't hold too much against the film that gave us all Lucius Malfoy, the most wonderfully odious (and sexy, apparently - I'm more of a Snape woman myself) character in recent children's literature. It is hard to take it seriously, however, once you've seen French and Saunders' magnificent spoof, Harry Potter and the Secret Chamberpot of Azerbaijan. Which I recommend heartily, unless you're Rupert Grint, in which case, don't look and comfort yourself by remembering that it was a long time ago!
Children's Literature Films Harry Potter Mythology Sci-Fi and Fantasy