The Chronicles of Narnia: The Voyage of the Dawn Treader (dir. Michael Apted, 2010) 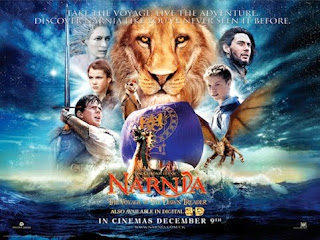 There's a fine line between adapting a story for a different medium, and telling an entirely different story that happens to share a few characters and locations (and neither has much to do with quality - some things are vastly improved in the course of serious alteration). I'm honestly not quite sure which side of the line this falls - and I'll need a second viewing to work out how successful I think it is (I spent too much of the first viewing with a 'what?' expression similar to the moment when Hector kills Menelaus in Troy). Spoilers follow.

I apologise to anyone not familiar with the book - skip the next couple of paragraphs and head to the bit about minotaurs!

The film has tried to represent Lewis' central theme of faith, mostly with fairly obvious conversations about believing in things, but it rather misses the point several times. Lewis' more subtle use of Corakin's Island to represent facing your fear and Ramandu's Island to represent the choice between whether to believe or not, highlighted by Edmund's questioning of Ramandu's daughter, are swept under and replaced by somewhat more banal insistences that belief is somehow important (and instead of being wary of Ramandu's daughter as a possible witch, Edmund pants after her as badly as Caspian does, which loses the point entirely). The film also tries to get across Lewis' motifs of temptation from the novel by talking a lot about being tempted and tested, but again tends to miss the point - Edmund and Caspian's fight at Goldwater Island is transformed from an example of the dangerous power of monetary greed to part of an ongoing rivalry between the two over who's king (which is rather sexist anyway, since no one suggests Lucy should be part of this argument even though technically she outranks Caspian as well).

(As a side note, I've spent years trying to work out whether the Islands represent the Seven Deadly Sins - Goldwater as Greed, Dark Island as Despair and Coriakin's Island as Envy and Pride together, or Vanity, seem obvious enough, but then it gets tricky. Dragon Island could be Sloth, though mixed with a bit of Greed as well, the Lone Islands might be Gluttony, but that doesn't work overly well, and perhaps Ramandu's Island is Pride. Or Sloth. It all depends partly on whether one uses the modern Catholic Deadly Sins - which Lewis probably wouldn't - or Dante's Italian version, or the Latin version, or the Greek version, all of which can vary in their precise translation. Lust is, thankfully, absent, except perhaps in some of the unspecified nightmares on Dark Island).

Change is not necessarily bad and there is some lovely stuff here. Goldwater Island and Dragon Island being the same place, for example, has a certain logic to it and helps to stop the film from becoming too episodic. Eustace and Reepicheep are, as in every version, the highlight, once you get used to Reepicheep's new voice - Pegg is great, it's just weird hearing a different voice from the same mouse. Their relationship is given much more time here than usual, which is lovely, though poor old Eustace has to spend half an eternity as a dragon and his wings must get awfully tired. I went to see this by myself, due to time constraints, and one of the advantages of seeing a film by yourself is that you are free to cry as much as you like at a boy and a computer-generated mouse saying goodbye to each other. On the other hand, part of me was feeling frustrated that, due to the story changes, Reepicheep no longer has to go to Aslan's country, but just goes because he wants to, with no particular good coming out of it. Which means, essentially, that he commits suicide. Which is rather depressing and, I suspect, not what Lewis was going for (but then, I have similar issues with Frodo and the Grey Havens, so maybe it's just me that sees it that way).

The Classical stuff in the book of The Voyage of the Dawn Treader appears generally more in terms of themes than direct borrowings. Most obviously, Lewis can't have failed to be influenced by the Odyssey, but there isn't a lot of direct referencing to the Homeric poem beyond the fact there are some islands and a ship that visits them. (Dark Island could be the underworld or Ramandu's daughter a nicer Circe/Calypso but really I think that's pushing it). Pliny the Elder mentions some monpods, who might have inspired the Dufflepuds, but it's not really much of a connection. Greek and Roman mythical creatures tend to be restricted to the land of Narnia itself, so we don't see many of them on the islands.

I'd always pictured the Dawn Treader's crew as

being made up of human sailors from Archenland and the nearer islands (because the Telmarines, despite their name and pirate origins, were terrified of the sea). But, just as Star Trek movies need some more excitingly alien crew members than the usual bumpy heads, Narnia movies need more fantastical creatures, so in addition to a faun crewmember, we have... another minotaur. Now they're sailors! I'm not sure if it's popular culture in general that has an obsession with minotaurs, or me, but they seem to be cropping up in the most bizarre places and in great numbers. I suppose there's no reason not to have a minotaur crewmember, really, but what does he eat? They have limited rations, after all. It must be something about the truly bizarre look of a minotaur combined with the fact they can walk around on two legs and, therefore, a person in costume can do the long shots, that makes them so popular just now.

Other good things: sea serpent vs dragon is undeniably cool; Edmund's torch returns; we finally get some actual Lewis right at the end (after disappointingly little earlier - much of Prince Caspian's best dialogue came from Lewis himself); the way you can see where the invisible Dufflepuds are by their breath; Aslan raking the sand to rip the dragon skin off Eustace; the whole thing is beautiful, especially Coriakin's map with its recreation of the first film's battle; the use of Pauline Baynes' colour illustrations during the end credits; Eustace in general, especially his bedroom set and his diary, and Will Poulter's fantastic performance. Eustace also wears English clothes throughout (when not a dragon) which is a very effective way of making him seem like someone who doesn't belong.

Other less good things: the bromance between Caspian and Edmund, which somehow manages to be even worse than the Caspian/Susan thing in Prince Caspian; the incredibly annoying and utterly pointless extra little girl, whom I just wanted to throw overboard (as if there aren't enough children in this story!); the painfully desperate set-up for The Silver Chair in the mention of Jill Pole at the end (who should still hate Eustace at this point); the mermaids are suddenly translucent for no reason; the whole business with the swords. Narnia is pretty high fantasy, but it's never been one of those stories which are all about getting the Sword of Blarg and putting it in the Stone of Thingy, or finding the Gem of Whathisname, and so on - Narnian stories have much more human goals and solutions (killing an evil Queen/King, finding a lost prince - twice! - curing a mother's cancer and, in this case, saving or avenging seven missing lords. The Last Battle is, um, different). The only good thing about that storyline was Eustace getting to save the day while everyone else was otherwise occupied.

I really do hope this film does well and that someone finances The Silver Chair, because I think these films are beautiful and engaging, and because The Silver Chair has great potential 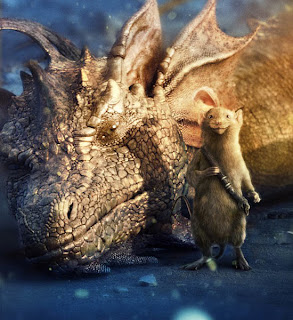 as a film (it's a simple, linear but not too episodic quest and it stars Eustace, what's not to like?!). And because I still nurse the hope that someone, someday will make The Horse and His Boy into a film (which is even more suitable for film, as long as Lewis' racism can be toned down - but I'm sure that's easily enough do-able, and focussing on Aravis as a girl escaping from a forced marriage could be really interesting). As for Dawn Treader itself, I think that it was really good. I certainly came out happy (and a little sniffly) and you won't see a more beautiful film this year. It'll take another viewing to get out of noticing what's different and appreciate the film for itself, but it's worth seeing for a mouse perched on a dragon's nose, if nothing else!
CS Lewis Films Mythology Narnia Sci-Fi and Fantasy